Massacre of 50 Muslims prompts conversations about alt-right, spies and Islamophobia in New Zealand and elsewhere. 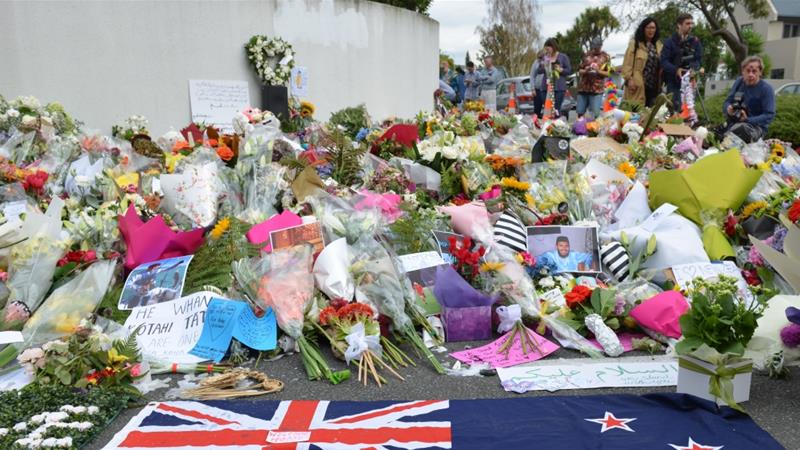 Christchurch, New Zealand – A week of national mourning, new gun-control laws and emphatic declarations of “This is not us” – New Zealanders have been forceful in denouncing the March 15 mosque attacks that killed 50 Muslim worshippers.

But amid the outpouring of public support for the Pacific island’s minority Muslim community, many are also asking how the suspected perpetrator of the gun assaults – 28-year-old Australian-born Brenton Tarrant – slipped under the radar of security agencies.

The answer, analysts say, has much to do with online radicalisation, but is also linked to authorities’ failures to adequately assess the threat posed by white supremacists, such as Tarrant himself. Behind that, some argue, is the normalisation of anti-immigrant and Islamophobic views by politicians and media outlets throughout the world, including in New Zealand.

“The inquiry will look at what could have or should have been done to prevent the attack,” Ardern said after her cabinet agreed on the inquiry. “It is important no stone is left unturned.”

Rise of the alt-right

Relatively few details have emerged about Tarrant, who claimed to have been inspired to commit the massacre after seeing the “invasion” of France by immigrants in 2017 and called for Turkey’s Hagia Sophia Museum to be “freed” of its minarets.

What is clear, however, is he was plugged into a global alt-right network as his online footprint on 8chan, a notorious far-right site populated by anonymous message boards full of violent language and threats, has shown.

The alt-right is a catch-all term for a number of political views stretching along a spectrum from the far right of mainstream conservatism all the way to pro-violence white supremacism.

At its heart, however, are specific threads of anti-immigrant, Islamophobic and white nationalist beliefs that bind the loosely knit grouping together.

All three narratives featured prominently in a “manifesto” allegedly published by Tarrant in the minutes before the mosque shootings.

The 74-page document, which denounced immigrants as “invaders” responsible for “white genocide”, was sent to politicians, including Ardern, while footage of the gun assaults was broadcast live on Facebook.

It wasn’t the first time Tarrant is believed to have aired hateful messages. In the days before the attack, online accounts allegedly linked to the suspect also circulated white supremacist imagery and messages celebrating violence against Muslims and minorities. Local media reports have also claimed he made “regular, racist, Facebook posts”.

Analysts say part of the reason Tarrant wasn’t flagged as a threat, however, is that much of his online activity was limited to murky sites such as 8chan, where he advertised his “manifesto” and the link to the livestream in the minutes leading up to the mosque attacks.

According to Jarrod Gilbert, a senior lecturer on crime and justice at the University of Canterbury, Tarrant’s case points to the fact that adherents of white supremacism, as with other violent and fringe narratives, no longer necessarily congregate together “in physical locales”.

Instead of the traditional “bunch of street thugs hanging around on a corner drinking cheap cider and sneering at immigrants”, he said, the alt-right gather together from the privacy of their homes.

“With the alt-right and the online communities, we don’t know how big or significant they are,” Gilbert told Al Jazeera.

“[They are] very different to the skinheads of the past … They exist in bedrooms and in an international internet community connected only tenuously by hate,” he said.

For authorities seeking to shut down their vitriolic narratives, the shift in white supremacists’ approach means authorities often struggle to identify where legitimate threats may come from.

Trying to monitor just one person online is “really quite difficult”, president of the New Zealand Police Association union Chris Cahill said, let alone an entire movement such as the alt-right, which may have millions of followers worldwide.

“It’s so easy for keyboard warriors to get online and spout all sorts of stuff,” he told Al Jazeera, adding many of those filling the internet with hateful narratives may never take action “outside of their room”.

“I have some faith that police and intelligence agencies do monitor that but social media is such a vast beast and there are so many different places to hide [online],” Cahill said. “And being able to understand the mix of threat is really difficult.”

Andrew Little, minister for the country’s security intelligence agency, revealed last week authorities had been working for months on a plan for monitoring “far-right extremism” prior to the Christchurch mosque attacks. It had yet to be finalised.

“I’d like to say I wish we’d done it earlier. I wasn’t concerned until now at the pace at which they were going,” Little told the NZ Herald newspaper.

‘We are far more likely to fear outsiders’

But critics argue the reason intelligence agencies failed to catch Tarrant is that they simply did not look closely enough at the 28-year-old and the wider alt-right collective.

The reason for the oversight, they say, was institutional bias spawned by anti-immigrant Islamophobic political rhetoric around the world, including in New Zealand.

“It is safe to say we have been perhaps too focused on what we might perceive to be the usual terror suspects, the ISIS type-inspired people,” Gilbert said, referring to the Islamic State of Iraq and the Levant (ISIL or ISIS) group, which swept through Syria and Iraq in 2014, establishing a self-proclaimed “caliphate”.

“We have clearly not been keeping our eye on stuff that may be a little more home-grown and has gone perhaps underneath the radar,” he said. “We are far more likely to fear outsiders than we are people from within our own. That’s not a great reality but I suspect it is a reality.”

Muslims in particular have borne the brunt of that fear, according to Muslim community advocate Guled Mire.

Mire said there had been “tremendous” surveillance of Muslims in New Zealand, pointing to racial profiling by police, airport security forces and stringent monitoring of the minority community’s online activity.

“It has not been on the same scale when it comes to white supremacist extremist views,” he told Al Jazeera.

“We in the Muslim community feel as if we have been let down, our law enforcement authorities and security agencies have failed us miserably.”

As in many other Western countries, New Zealand’s political leaders have taken a hard-line stance on immigration in recent years, helping create what Mire called a “normalisation” of anti-immigrant and Islamophobic views in some pockets of society.

Ardern herself promised to slash migration numbers, which have been blamed by some for a housing crisis and stagnant wage growth, during her 2017 election bid.

The New Zealand leader, widely praised for her empathy in response to the March 15 attack, also had to strike a deal with now-Deputy Prime Minister Winston Peters, head of the nationalist New Zealand First Party and a staunch critic of immigration, in order to govern.

Peters has said in the past that New Zealand was being “dragged into the status of an Asian colony” by immigration, and in the wake of the London bombings in 2005 claimed, “moderate and militant [Muslims], fit hand and glove everywhere they exist”.

Analysts, meanwhile, have warned Muslims, who account for about one percent of New Zealand’s nearly five million people, continue to face racism.

Such discrimination includes verbal and physical abuse, negative stereotyping, including in the media, and a lack of knowledge about their faith and its associated customs in the Pacific country.

Issac Azam, a resident in the northern city of Auckland, home to about three-fifths of New Zealand’s 50,000 Muslims, told Al Jazeera he knew of several people who had been “targeted” by discrimination ranging from racist name-calling to assault.

Three years ago, Azam also pointed out, a pigs head was left in front of the Al Noor mosque, where more than 40 people were shot dead on March 15.

“Words matter and can carry so much weight, we have found this out the most devastating way,” he said.

In the wake of the mosque attacks, Ardern has admitted New Zealand has work to do on eradicating all forms of racism, with the country’s non-white minority communities, including the indigenous Maori, frequently experiencing discrimination.

New Zealand’s acting Race Relations Commissioner Paul Hunt has also called on the Pacific nation to recognise that “in some quarters of our society there is Islamophobia” and implored the government to “revisit hate laws”.

While New Zealand staggers from the Christchurch tragedy towards having conversations about what the attack says about race relations in its society, the global nature of modern day white supremacism means it can’t overcome the threat posed by the alt-right alone.

Tarrant himself cited an array of global inspirations, including previous mass killers such as the Norwegian far-right gunman Anders Breivik, fascists such as Britain’s Oswald Mosley, and modern-day populists such as US President Donald Trump.

Ardern was quick to point out the suspect only spent “sporadic periods of time” in New Zealand and called for “global action on extremism”.

In an interview with the BBC, she claimed Tarrant’s case was proof leaders could no longer “think in terms of boundaries” if they want to guarantee “a safe and tolerant and inclusive world”.

“We absolutely have to learn the lessons from both what gave rise to the ugly ideology of this individual and what environments allow that to grow and potentially spread,” Ardern said.

‘A window of opportunity’

But some analysts have been more explicit in their analysis, and suggested ending the threat posed by the alt-right and Islamophobia will only be achieved by shifting existing mainstream narratives about Muslims, both locally and internationally.

Dutta also called for discussions “anchored in the voices of Muslims experiencing hate” as the “starting point to halting the global spread of Islamophobia”.

Mire agreed and called on New Zealand to set the standard in battling back Islamophobia and the rise of “alt-right extremist ideologies”, which he said threaten minorities “everywhere” in the world.

“It’s sad to think that a situation like this is what drives us to have these difficult and hard discussions,” Mire said.

“But we have a small window of opportunity, right now, and we must take it in order to ensure that such events never happen again.” 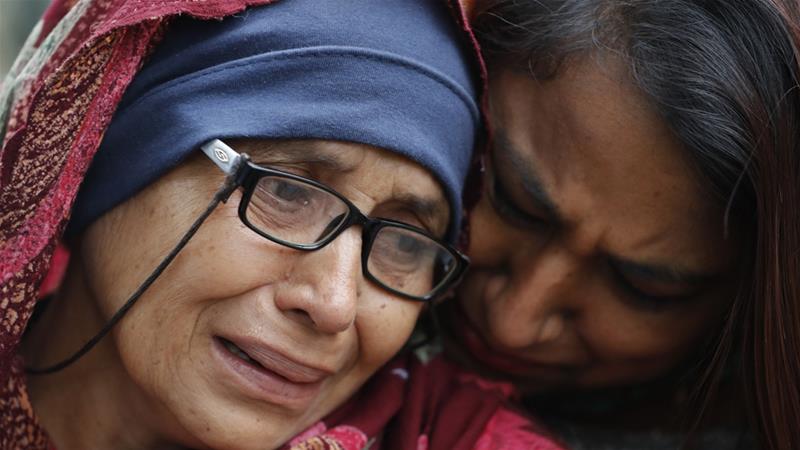