As condolences from around the world continue to be received by Kuwait following the death of Sheikh Sabah Al-Ahmad Al-Jaber Al-Sabah last week, Kuwaitis are awaiting the announcement of a new crown prince.

With the crown prince to become the deputy of the new monarch – 83-year-old Sheikh Nawaf Al-Ahmad Al-Sabah – and likely to become the next emir, the heir apparent is considered one of the most powerful political figures in the country.

The selection of the crown prince is therefore an important step, that signals, according to Gulf expert Courtney Freer, “the policy direction of the current emir”.

Further adding to the significance of the role, article seven of the constitution gives the emir “the right to solicit the support of the crown prince if he so wishes in conducting his constitutional duties as head of state,” Bader al-Saif, assistant professor of history at Kuwait University, told Al Jazeera.

Under the Gulf state’s constitution, a new emir has a year to nominate a crown prince, who must then be approved by parliament.

But the decision has often been taken just weeks after the swearing-in of a new monarch.

Kuwait’s parliament speaker Marzouq al-Ghanim said on Tuesday that the assembly’s term would end on Thursday ahead of upcoming elections, but that the body would hold an extraordinary session if the new emir names his choice of crown prince after Wednesday.

If Emir Nawaf does name his choice of crown prince by Wednesday, al-Ghanim said he would call a parliamentary session for Thursday morning.

Three names have been circulating in local and international media as potential candidates for the role of crown prince in the small Gulf state and major oil exporter.

Among them are the late emir’s eldest son, Sheikh Nasser Sabah Al-Ahmad Al-Sabah. Known for being business-minded, Nasser Al-Ahmad, 72, has worked to diversify the country’s economy and was chair of Kuwait’s main planning committee – leading projects including the multi-billion-dollar Silk City, an economic hub in north Kuwait.

He became defence minister in 2017, but lost the post in late 2019 amid a cabinet reshuffle and infighting within the ruling family over alleged government corruption.

Dania Thafer, director of the Gulf International Forum, told Al Jazeera: “Sheikh Nasser Sabah has managed to gain popularity among the Kuwaiti population and is a key engineer of Kuwait’s ‘Vision 2035’,” – an initiative that aims to transform the Gulf state into a regional and international financial and trade hub. 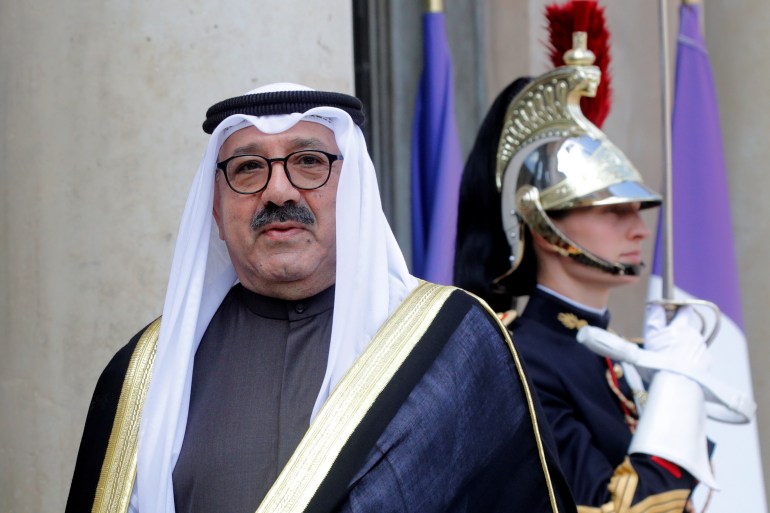 Nasser Al-Mohammed, 79, was prime minister from 2006 to 2011. He notably stepped down in 2011 following “speculation from the opposition about his potential involvement in a corruption scandal,” said Freer, a research fellow at the London School of Economics Middle East Centre.

In addition to his role as prime minister, Nasser Al-Mohammed also served as minister of the royal court from 1991 to 2006, and ambassador to Iran and Afghanistan between 1964 and 1979. 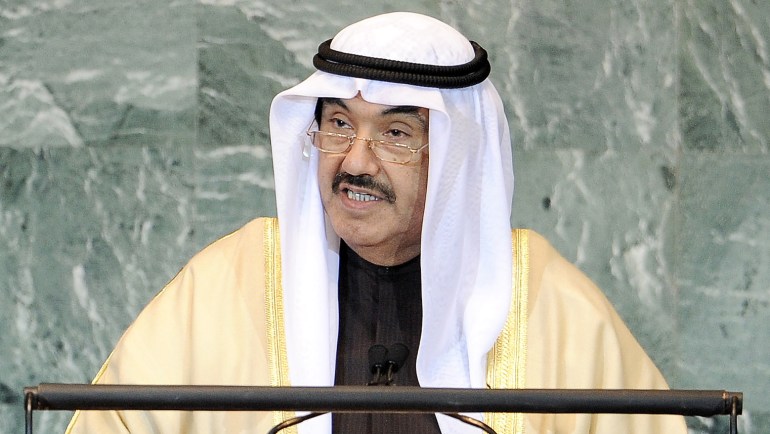 Kuwait’s former prime minister Sheikh Nasser Al-Mohammed Al-Ahmad Al-Sabah, the late emir’s nephew, stepped down from his role last year during protests over government corruption [File: Justin Lane/EPA]But while Thafer agreed that both Nasser Sabah and Nasser Al-Mohammad are viable contenders for the position of crown prince, she believed the late emir’s younger brother and deputy chief of the National Guard, Sheikh Meshaal Al-Ahmad Al-Jaber Al-Sabah, appeared most likely to win the role.

Sheikh Meshaal “does not have any alleged scandals and controversy associated with him; he has a very close relationship with the Emir Sheikh Nawaf Al-Ahmad Al-Sabah, and is viewed to have good relations with neighbours such as Saudi and the UAE,” Thafer said.

“He was also the one that accompanied the late emir to the US for medical treatment,” she added.

Born in 1940, Sheikh Meshaal has been deputy chief of the National Guard since 2004. He previously served as head of security services and in the interior ministry.

Although it remains unclear who will be the next crown prince, a key issue governing the decision will be “how close the prospective nominee is to the Emir Sheikh Nawaf and their relations with other members of the ruling family,” said Thafer.

“The other is how they can manage good relations with domestic constituents and political blocs.

“It will also be necessary to have balanced relations with major regional players such as all parties in the GCC, along with Iran,” she said.

If the nominee fails to win approval of the National Assembly within one year after the monarch ascends the thrown, the emir must come back with three alternative names from among the family.

“A lack of a majority vote returns the matter to the emir who then needs to nominate three names from the descendants of ruler Mubarak Al-Sabah in which the parliament then chooses one,” said al-Saif.

Under the constitution, the nomination of the prime minister, which can only take place following consultations, differs from that of the crown prince, said al-Saif.

He explained that “this comparison highlights the conscious intent of the founding fathers of modern Kuwait to not have anyone interfere in the emir’s right to nominate whom he believes is the fittest for the job [of crown prince]”.

Looking at previous ascensions to the throne, the process of appointing a new crown prince has usually only taken a few weeks.

“The last nomination happened nine days after Emir Sabah assumed power [in 2006] and the nomination was approved by parliament 23 days after the emir came to power,” said Kuwait University’s al-Saif.

While the 2006 succession process was swift, Sheikh Sabah came to power in an unusual manner after parliament deemed then-Crown Prince Sheikh Saad Al-Abdullah Al-Sabah unfit to rule due to health concerns.

This process seemingly ended an alternation of power between the Al-Salem and Al-Jaber branches of the Al-Sabah ruling family. Since 2006, the Al-Jaber branch has held both the position of the emir and the crown prince.

Prior to that in the 1970s, “it took late emir Sheikh Jaber 31 days from his assumption of power to nominate then-Crown Prince Sheikh Saad,” al-Saif added.

Upcoming elections are likely to further speed up the current process, with Kuwait’s constitution requiring a legislative vote be held every four years.

Since the last parliament was elected in November 2016, another vote is scheduled to take place before the end of 2020.