Acting US attorney general and Trump loyalist denies speaking to Trump or associates about the Mueller investigation. 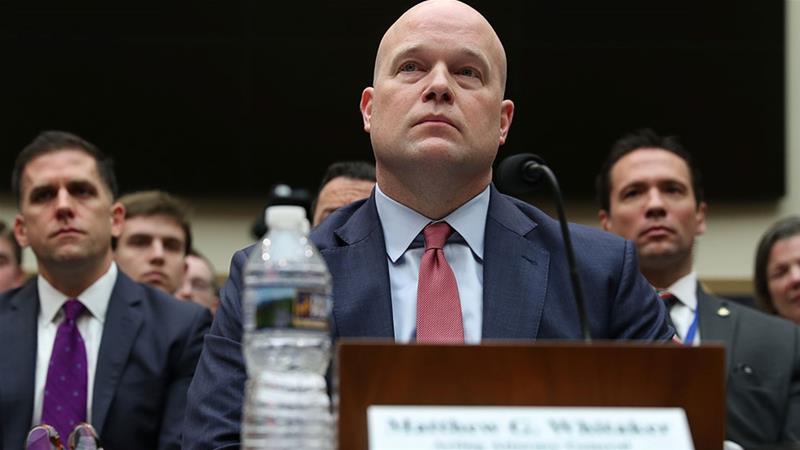 Acting US Attorney General Matthew Whitaker said he has not spoken to President Donald Trump or anyone in his inner circles about the special counsel’s probe into alleged Russian election meddling.

In a combative congressional hearing on Friday, Whitaker, a Trump loyalist and appointee, told the Democratic-led House of Representatives Judiciary Committee that he has not talked to Trump or senior White House officials about the investigation.

“We have followed the special counsel regulations to a T,” he said.

“There has been no event … that has required me to take any action, and I have not interfered in any way” with Mueller’s probe, he added.

In his opening statement, Whitaker said that while he would address the committee’s questions, he would not reveal details of his communications with the Republican president.

He told politicians that since he took over as acting attorney general in November 2018, there has been no change in the “overall management” of Special Counsel’s Robert Mueller investigation. He added that he has not denied any funds to the special counsel’s investigation.

Democrats suspect Whitaker’s appointment as the top judicial official was aimed at suppressing investigations of Trump, who has repeatedly called the Mueller probe a “witch-hunt”. The president has also said there was no collusion between his campaign and Russia.

In August 2017, Whitaker wrote in an op-ed published on CNN that “Mueller has come up to a red line in the Russia 2016 election-meddling investigation that he is dangerously close to crossing.”

“If he were to continue to investigate the financial relationships without a broadened scope in his appointment, then this would raise serious concerns that the special counsel’s investigation was a mere witch-hunt,” he wrote. When pressed on Friday if he considered the investigation a witch-hunt, he said it would be “inappropriate” to comment on an ongoing investigation.

Whitaker said that he has run the Justice Department to the best of his ability, with “fidelity to the law and to the Constitution”.

Whitaker repeatedly declined to answer questions about when and how many times he was briefed on Mueller’s probe, prompting committee Chairman Jerrold Nadler to threaten to call him back for a deposition.

Whitaker had been chief of staff to Sessions, who was forced from the Cabinet last November as Trump seethed over Sessions’s decision to step aside from overseeing the Russia investigation.

Hours before the hearing on Friday, Nadler and Democratic heads of several other House panels renewed a call for Whitaker to produce documents regarding his prior work with the company World Patent Marketing.

In a letter, the heads of the House Oversight and Reform, Energy and Commerce, Judiciary and Intelligence committees said new records showed Whitaker did not return money to consumers who had complained about the company’s practices.

They also sought documents about the department’s recent decision regarding online gambling, citing campaign donations from casino executives to Whitaker’s campaign years after he ended an unsuccessful US Senate bid.

Republicans dismissed the hearing with Whitaker as a political stunt and moved to end it before it began.

On Thursday Whitaker had threatened not to appear at the hearing after Democrats approved a tentative subpoena, that if issued, would have compelled the acting attorney general to answer the panel’s questions.

Later, Nadler agreed to drop the threat, paving the way for Whitaker’s appearance before the panel.

Doug Collins, the top Republican on the House Judiciary Committee, called the hearing a “dog and pony show” and criticised Democrats for disclosing derogatory information about Whitaker’s business dealings hours before the hearing.

The hearing concluded with Nadler calling Whitaker’s testimony inconsistent “at best”. Nadler reminded Whitaker that the committee had submitted questions relating to the special counsel investigation and was waiting on answers.

Trump has nominated William Barr as attorney general. Barr is expected to face a Senate confirmation vote next week.