Sweet potatoes are the humble man’s currency. They don’t need a thing to dazzle, their slightly crumpled skins pull away easily, revealing tender flesh, hot out of the roasting pan.

“Nothing is more nostalgic than the caramelized smell when sweet potatoes are bubbling out,” said April McGreger, the author of the cookbook “Sweet Potatoes,” published in 2014.

For generations of Southerners, white and Black, who grew up in rural towns and then moved to metropolitan areas in the United States, the month of November means securing sweet potatoes, preferably shimmering in dirt, for holiday meals. (The dirt prevents mold and helps prolong the potato’s cellar life.) 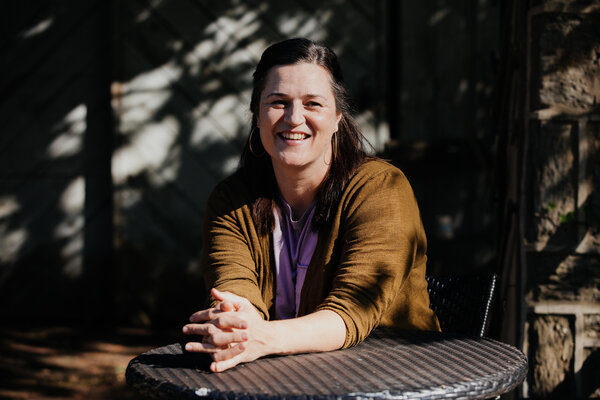 “Getting my sweet potatoes causes me an unbelievable amount of thinking and stress,” said Ms. McGreger, who was raised in Vardaman, Miss., and now lives in Philadelphia’s Mount Airy neighborhood. “If I happen to drive to Mississippi, I get a 40-pound unwashed box grown in Vardaman.”

Orange-fleshed “taters” grow best in warm climates and dry dirt. Plus, after harvesting, providing a calculated dose of direct heat and humidity, a process known as curing, is needed to fully form the potato’s sugar profile; small growers find a dry spot to lay out the sweet potatoes and give them a sun bath. Both soil composition and proper curing are necessary for creamy spuds that don’t beg for butter or sugar. Ms. McGreger said that when a sweet potato isn’t cured well, you can taste the difference.

Although yams and sweet potatoes are interchangeable to many Americans, yams belong to another plant group; most African diaspora yams are large, with fibrous skin and pale white flesh. (During the 1930s, the U.S. Department of Agriculture allowed Louisiana farmers to market the Puerto Rican sweet potato variety as yams, according to Ms. McGreger’s book.)

In 1922, George Washington Carver released “How the Farmer Can Save His Sweet Potatoes and Ways of Preparing It for the Table,” a 23-page booklet that served as a resource for farmers and cooks. Almost a century later, Carver’s dictum that “time is an essential element, it should be kept in the oven for an hour” is still the secret to accentuating the sweet potato’s natural flavor.

Vardaman, about 140 miles south of Memphis, is known as the world’s sweet potato capital. Since 1973, the Mississippi town has held an annual festival (canceled this year because of the Covid-19 pandemic), all in the name of a root vegetable, crowning pageant queens, showcasing antique tractors and operating a sweet potato tasting booth — Ms. McGreger’s favorite part of the festival.

“I was intrigued by the things people would make: sausage balls, bonbons and punch,” said Ms. McGreger, who ran the pickle and preserves brand Farmer’s Daughter in North Carolina for more than a decade.

This year, her holiday sweet potatoes will come from her brother, who just opened a sweet potato packing house.

Transporting regional provisions across invisible borders is a phenomenon that never dies, and the fall season increases the urgency. Southern nuts and fruit that come direct from the grower are difficult to find beyond the South or require a sophisticated scavenger hunt. During the great migrations of the 20th century, Black Americans from Georgia, Alabama and Arkansas settled in New York City, Los Angeles and Detroit. Then, as now, expats from below the Mason-Dixon line sojourned with pecans, wild persimmons, muscadine grapes and the rest of the season’s harvest. There is sweetness in the journey.

If there were a wandering victuals club — transporting loaded suitcases with bubble-wrapped jars, and brown paper sacks brimming with backyard garden goodies — Dr. Howard Conyers would be a member.

Dr. Conyers, an aerospace engineer and self-described whole-animal barbecue geek in New Orleans, brings home sweet potatoes that his father, Harrison Conyers Sr., grows on a one-acre plot in the Coastal Plain region of South Carolina, where he has cultivated the same variety for 40 years. “My father provided for us as a welder and not a farmer,” Dr. Conyers said. “The seeds were given to him as an exchange for giving a church member a new set of car tires.”

On a trip two years ago, airport security opened Dr. Conyers’s suitcase for an inspection. “I had 30 or 40 pounds, dumped in multiple tubs,” he said. “I was sort of embarrassed because I had so many sweet potatoes.”

He has never bought supermarket sweet potato varieties like jewel or garnet. Instead, he waits for a shipment of his father’s crop.

“My father grows sweet potatoes not to make money, but for tradition,” Dr. Conyers said. “He gives most of the yield away to family members or people in the community.”

As a child, Dr. Conyers remembers cooking the potatoes in the flames of the fireplace, and when barbecuing, dropping them in the ashes — snacks while the whole hogs cooked. And just like every Thanksgiving prior, this year he’ll taste the terroir of South Carolina and reminisce on family rituals, but in New Orleans. “I grill my sweet potato in these remembrances,” he said.

This sweet, savory, spicy dip will most likely be among several hors d’oeuvres served simultaneously, so it requires a wine that will be versatile enough to encompass the whole range of flavors. A crisp, dry sparkling wine would be an obvious choice, whether Champagne, cava or the myriad others made around the world. A dry or moderately sweet riesling would also go well, as would perennially flexible wines like sauvignon blanc or grüner veltliner. I would be happy to drink chenin blanc — I almost always am. If you are open to dry rosés in cold weather months, this is a great opportunity to serve one. Beaujolais and pinot noir would be good bets if you are set on a red. ERIC ASIMOV