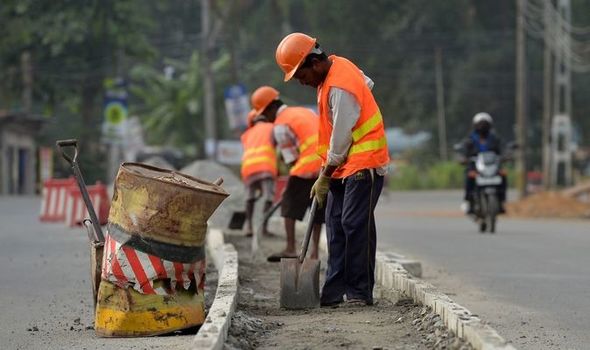 China’s “Belt and Road” scheme has seen Beijing sink billions into new roads, ports, railways and bridges across Asia, the Indo-Pacific, Africa and the EU’s nearer neighbours in theWestern Balkans.

But critics claim Beijing uses the infrastructure projects to hook smaller, poorer countries into “debttrap diplomacy” – meaning they may have to do whatever China says.

Sources said Beijing often trades investments in these countries for votes in global forums such as the United Nations because they will do “whatever they can” to avoid losing assets or further financial blows.

Records at the UN indicate that many countries receiving large sums of Chinese cash will back Beijing in often controversial votes.

China has emerged in the past decade as the world’s largest noncommercial international creditor, with its state-owned banks lending more to developing countries than the International Monetary Fund andWorld Bank.

Julia Pamilih, of the China Research Group, said: “It is clear that China trades investment for some form of strategic influence, whether it is refusal to criticise human rights or supporting Beijing over Taipei [Taiwan’s capital].

“The solution is for the UK and West to work together to provide competitive alternatives for infrastructure financing, which they are currently doing through the G7 Build Back Better World by China’s mobilising private sector financing. But it will be difficult to compete with the Chinese model.”

Figures compiled by Johns Hopkins University in the US show China has lent Angola US$42billion (equivalent to £31.5bn), Ethiopia $13.7bn, Zambia $9.9bn, Kenya $9bn and Nigeria $7.2bn. Separate figures show Chinese investments in Laos, Sierra Leone and Guinea are greater than their Gross Domestic Product. Research by the American president Xi Jinping Enterprise Institute reveals Beijing has invested £28billion in Laos over the past 15 years. Its GDP is estimated at £18billion.

Beijing has ploughed £6billion into Sierra Leone since 2005, while its GDP is said to be £4.1billion.

Isabel Sawkins, research fellow at the Henry Jackson Society, said: “The debt traps they are constructing leave countries under China’s thumb, feeling obliged to support China’s geostrategic interests in return for financial support. Poorer Commonwealth nations, from Sri Lanka to Uganda, are now so hooked on China’s money that they are blindly unaware that if they cannot pay this back they may have to function as puppets for the Chinese state.”

Since 2005 Pakistan has received £60billion in investment from China, more than a fifth of its GDP, and it now buys 70 per cent of its arms from China. If recipient countries cannot afford to repay what are often highinterest loans, China will seize the assets that have been used as security.

Sri Lanka was forced to hand over the Hambantota container port and 15,000 acres of land to Beijing on a 99-yearlease after falling behind on its loans.

China has invested nearly £15billion in Sri Lanka since 2005.

The EU is expected to release details in the next few days of a £255billion investment package to weaken China’s influence.

The head of MI6, Richard Moore, said earlier this week that Beijing is “trying to use influence through its economic policies to try and get people on the hook”.

He also talked of a “data trap”. “If you allow another country to gain access to really critical data about your society, over time that will erode your sovereignty, you no longer have control over that data,” he said.

“That’s something which in the UK we are very alive to and we’ve taken measures to defend against.”

Beijing yesterday reacted angrily to Mr Moore’s comments, saying “something hysterical must have significantly happened in the UK”.

The state-run newspaper Global Times said in an editorial: “As a rising power, China has been as moderate as possible on the global stage.And so far, it has not adopted gunboat diplomacy or forced any country to make particular choices with China’s military power.”