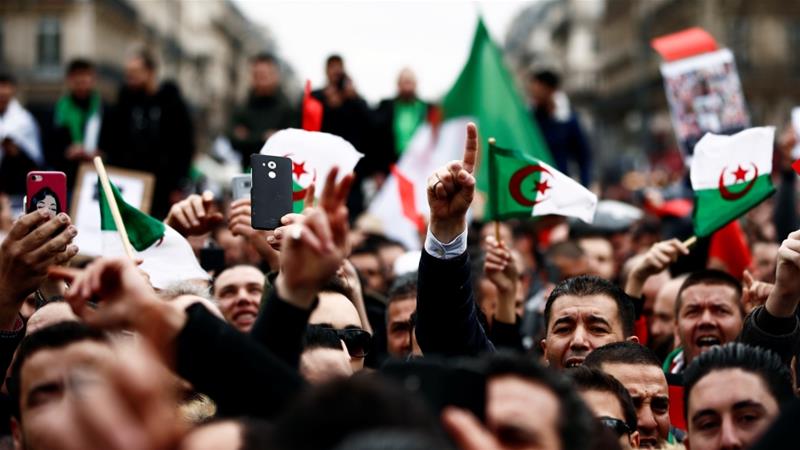 Just as students across Algeria on Sunday began gathering once again to demand their country’s president step down, thousands of kilometres away, on the other side of the Mediterranean, their compatriots were also getting ready to pour into the streets.

In a show of solidarity, thousands of flag-waving protesters rallied in France’s capital, Paris, to add their voices to those back home denouncing Algerian President Abdelaziz Bouteflika’s plan to seek a fifth term in office in next month’s elections.

The 82-year-old, who was first elected president in 1999, has rarely been seen in public since suffering a debilitating stroke in 2013. Still, his campaign team on Sunday formally submitted his candidacy to the Constitutional Court.

“It is very important to mobilise here because we have to echo what is going on in Algeria,” Amina Afaf Chaieb, a protester from the Ibtykar Citizen Movement, said in central Paris.

“It is very important to say ‘no’ to a fifth term but also to a regime that has taken us all hostages for so long.” 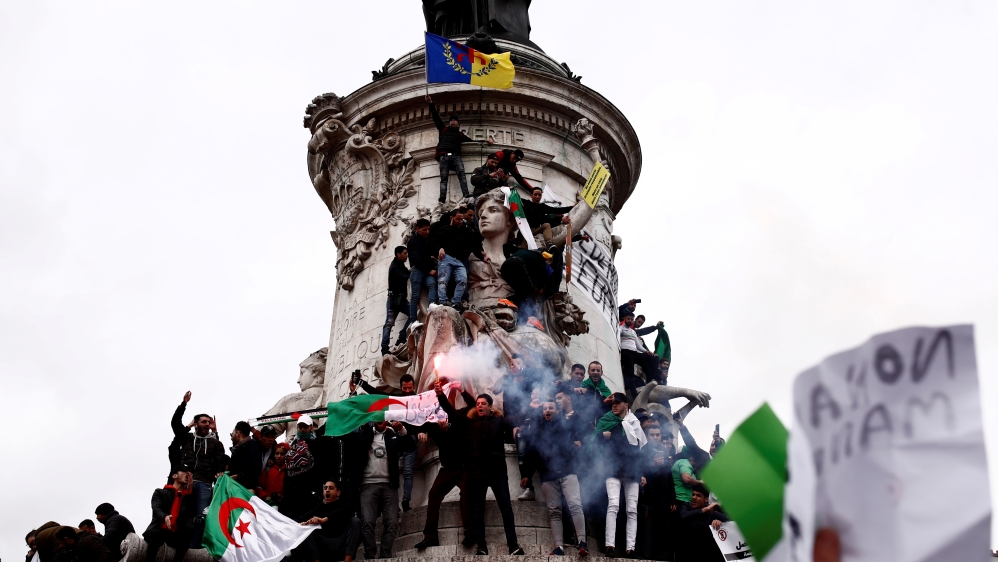 This was the second time in as many weeks that France’s Algerian diaspora heeded in large numbers the call for protests, with rallies also held in Marseille and Toulouse, according to opposition figures.

On Saturday, Bouteflika’s supporters staged a gathering of their own in Paris but videos posted on social media purportedly showed it had managed to draw dozens of participants.

Anti-Bouteflika demonstrations first erupted in Algeria on February 22, about two weeks after the president confirmed his plan to run in the April 18 vote, with many expressing doubts over the ailing leader’s ability to lead the country.

“There’s no fifth [term] for Bouteflika, bring out the riot police and special forces,” demonstrators chanted in Paris, taking their cue from the ongoing protests back home.

Moustafa, a 56-year-old security guard who was born in France, said he joined the Paris rally because he felt a responsibility to ensure the demands of the protesters in his parents’ country would be heard.

“I’m here to support my brothers who are waging a peaceful battle in Algeria,” he said.

Moustafa argued the mass mobilisation was as much about the president’s unfitness for office as it was about the rampant corruption and the inefficiency with which the country was being run.

“The protest is against the political mafia that controls the country … Those in power have become rich at the expense of ordinary people,” he said.

Despite Algeria being one of the world’s biggest oil and gas producers, youth unemployment is estimated at about 29 percent – an alarming statistic in a country where 70 percent of the population is believed to be under the age of 30.

Meanwhile, critics say authorities have failed to institute the reforms needed to diversify an economy that is heavily dependent on hydrocarbon sales and vulnerable to commodity price fluctuations.

The government successfully weathered the wave of protests that toppled leaders elsewhere in the region, notably Zine El Abidine Ben Ali and Muammar Gaddafi in neighbouring Tunisia and Libya, through generous state subsidies, which were feasible at a time of high oil prices.

Memories of a bloody civil war that claimed an estimated 200,000 people in the 1990s, the result of an aborted political liberalisation, also played a role in dissuading people previously from taking their grievances to the street, according to observers. 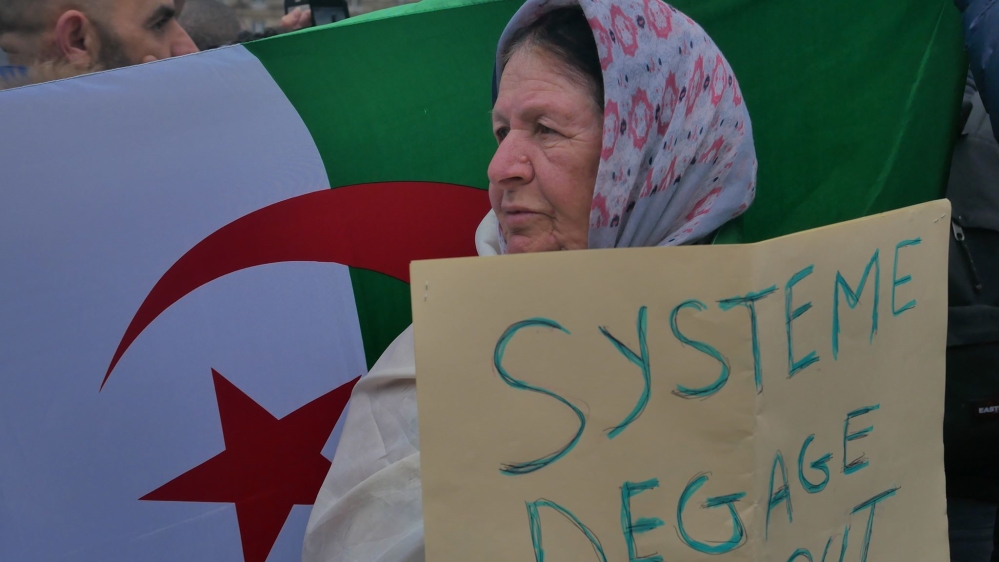 Sarah, a 22-year-old student born in Algeria, said Bouteflika’s candidacy was only the tip of the iceberg for people like her and her friends who have effectively only known one president in their lives.

“The entire system needs to be changed. It’s not a single subject that we want to address,” Sarah said.

“Censorship is all I have seen in Algeria. Those who are close to the regime live the best of lives while others live in extreme poverty,” she added.

“I don’t intend on voting if Bouteflika runs for office … They have to leave. They’ve done nothing but destroy and steal [the country’s wealth]. But their Machiavellian plan is finally being seen for what it is.”

Members of the opposition have also threatened to withdraw from the race if Bouteflika’s candidacy is approved.

Some, including former prime minister Ali Benflis and Abderrazak Makri, leader of the Islamist Movement for Society and Peace, have already quit, alleging the vote’s result was a predetermined affair.

The ongoing movement against Bouteflika’s bid for a fifth term spread to the east and west coast in the United States.

Hundreds gathered at Union Square in New York City on Sunday to express their discontent with Algeria’s political regime.

“I stand here in solidarity with my fellow countrymen and women who, throughout our history, have stood up against injustice and have risked their lives for a better Algeria,” said Sophia Laila Agag in Manhattan.

“We need an improved democracy that guarantees jobs, access to healthcare and education. If Bouteflika gets a fifth term, this will prevent Algerians [from getting] their freedom.”

On the west coast, more than 200 Algerians demonstrated at San Francisco’s Civic Center.

“Algerian Americans, first generation and second like myself, are raised with values that come from a history of revolution and fighting for justice. That was apparent today, even with the thousand miles of distance,” said Vanessa Mehaouchi.

“I was so impressed with the demonstration today. Algerians in America who understand the value of opportunity and democracy want to see it at home.” 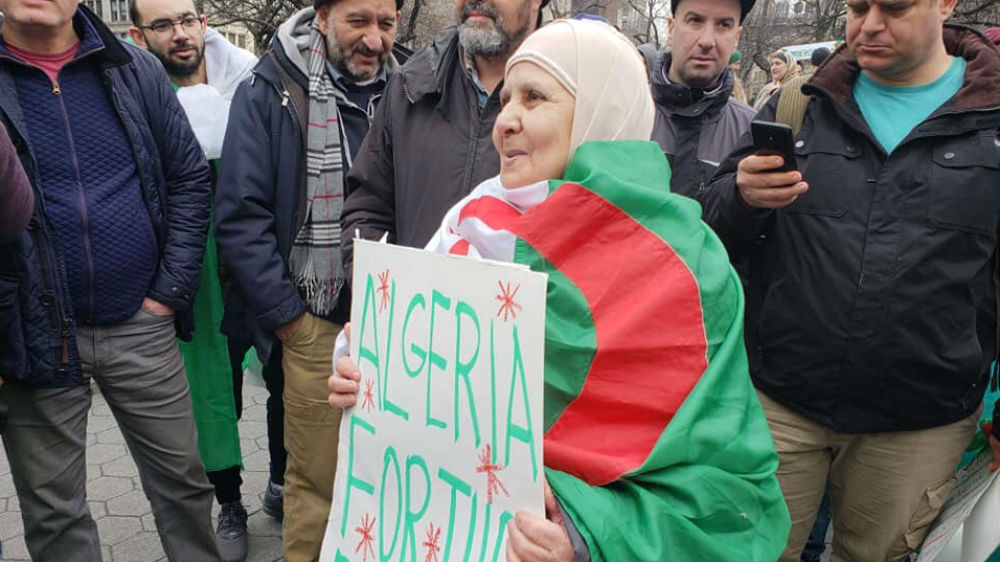