Ursula von der Leyen suffered an embarrassing gaffe as her seat next to Turkey’s President Erdogan was nabbed by Charles Michel as she stood there waiting for him to move with no luck. Ms Von der Leyen voiced her annoyance which was not picked up by Mr Michel as the pair arrived in Turkey to discuss the future of the refugee agreement. But the European Commission president was then confined to a distant sofa as the press took photos of Mr Michel and Mr Erdogan with a visibly disgruntled Ms Von der Leyen looking on.

Ms Von der Leyen was joined by Mr Michel to discuss the future of the refugee agreement with Turkey after arriving in the country on Tuesday.

An agreement was put in place in 2016 to curb the number of illegal immigrants entering Europe via Turkey.

EU member states would resettle a Syrian refugee for every illegal refugee sent back to Turkey from places like Greece.

The move was also seen to slow down the growing far-right support in Europe who were growing disgruntled over the influx of unchecked refugees. 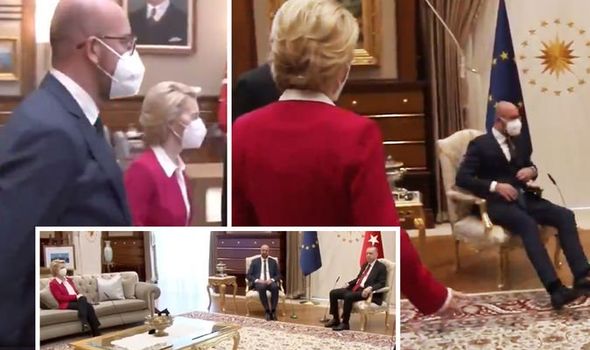 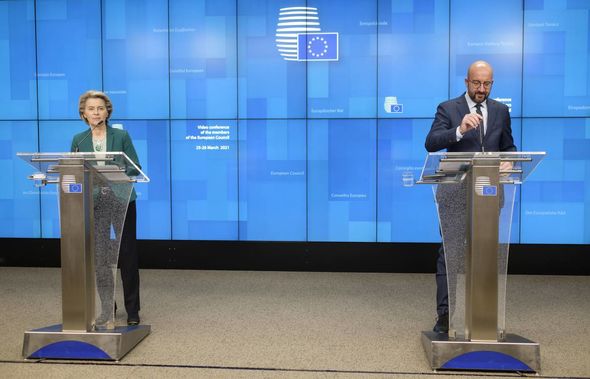 The EU also provided £2.58billion of funding to Turkey to help with the migrant crisis and for the country to act as the “gatekeeper” to Europe.

Ms von der Leyen and Mr Michel will also discuss how to deescalate tensions between Turkey and Greece over territorial disputes and energy resources.

Ahead of the meeting, the European Commission President said that commitments to human rights were key to a working relationship with the EU.

The comments were in response to Turkey’s withdrawal of the Istanbul Convention which focuses on domestic violence against women. 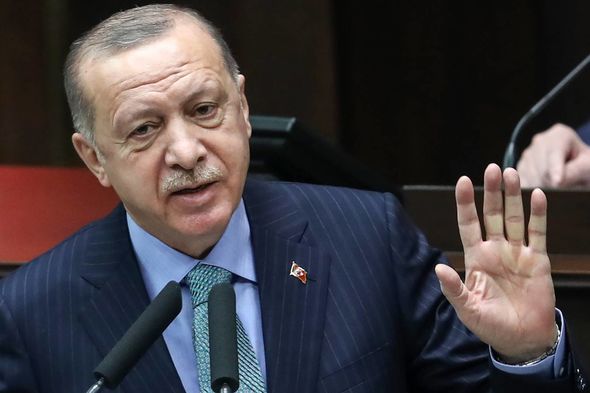 Ms Von der Leyen discussed the refugee agreement made with Turkey and said: “We expect Turkey to stand by its commitments and deliver on them, this includes preventing irregular departures and it also included resuming return operations from the Greek islands to Turkey without any delay.”

Figures suggest there are nearly ten million Syrian refugees in Syria and Turkey who are receiving financial help to rehome them.

The EU is attempting to better its relationship with Turkey after EU Foreign Chief Josep Borrell said relations hit a low point in 2020.

He said: “The situation remains fragile, but the EU welcomes these forthcoming developments and gestures on the part of Turkey and has responded by extending its hand.”