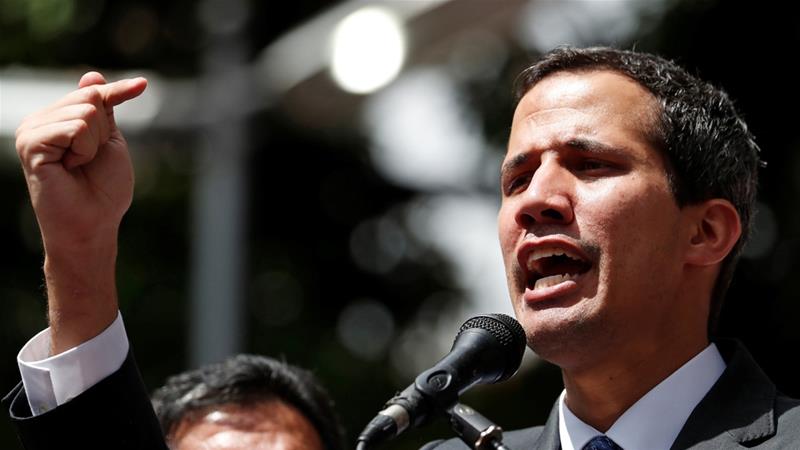 Juan Guaido, Venezuela’s self-declared president, has said he’s working to restore ties with Israel a decade after Venezuela severed relations with it in solidarity with the Palestinians.

Guaido told Israel Hayom newspaper on Tuesday: “I am very happy to report that the process of stabilising relations with Israel is at its height.”

“First we’ll restore the relations, then we’ll announce the appointment of an ambassador to Israel, and we very much hope an envoy will come here from Israel,” he said.

Guaido, who is backed by the United States, also said he was weighing whether to relocate Venezuela’s embassy from Tel Aviv to Jerusalem.

“I will declare the resumption of ties and the site of the embassy at the proper time,” he said.

The status of Jerusalem is one of the biggest obstacles to a peace agreement between Israel and the Palestinians, who want East Jerusalem recognised as the capital of a future Palestinian state.

Israel regards all of Jerusalem as its capital, including the eastern sector that it annexed in 1967 in violation of international law.

‘Mossad are trying to kill me’

Last month, Israel joined the US, the UK and a host of European countries in recognising Guaido as the interim president of Venezuela.

However, President Nicolas Maduro – who won elections in 2018 with 67.7 percent of the vote – retains the support of state institutions including the military and Russia and China.

Guaido’s embassy announcement could mark a sharp shift in Venezuelan foreign policy, which has traditionally backed a two-state solution to the Israeli-Palestinian conflict.

Under Hugo Chavez, Maduro’s predecessor, Venezuela cut ties with Israel over its actions in the 2008-2009 war in Gaza.

At a rally in 2010, Chavez also alleged that Israel was “financing the Venezuelan opposition” against him.

“There are even groups of Israeli terrorists, of the Mossad, who are after me trying to kill me,” he said.

Guaido has vowed that the opposition, which he has regalvanised after several years of infighting, will keep protesting against Maduro until new presidential elections could be held.

The opposition has been holding regular protests and on Tuesday held a vigil demanding that aid being blocked by Maduro be let in.

Maduro’s government insists aid is not needed and that the US is using it as an excuse to get its hands on Venezuela’s abundant oil reserves, replicating the US’s military interventions in Iraq and Libya.

In a separate development on Tuesday, Russia said it was ready to help resolve Venezuela’s crisis but warned the US against intervening in Caracas’s internal affairs.