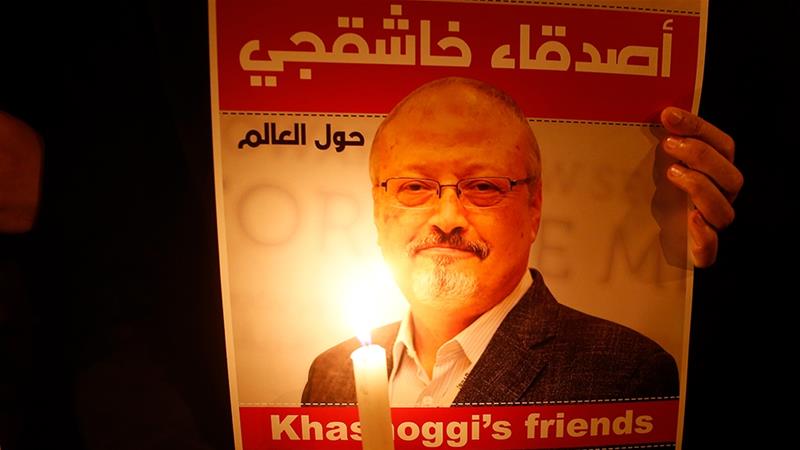 Washington, DC – In a new bid to force the government in the United States to release information about the killing of US-based Saudi journalist Jamal Khashoggi, a group of US senators introduced legislation on Tuesday that would require the Director of National Intelligence to submit a public report on the assassination.

Khashoggi, who was a columnist for the Washington Post and known for his critical writings on Saudi Arabia, was killed shortly after entering the Saudi Arabian consulate in Turkey on October 2, 2018.

After an initial denial, the Saudi kingdom confirmed that Khashoggi was killed by 15 Saudi agents, but attempted to distance its leadership from the murder.

The CIA has reportedly concluded that MBS ordered the murder, an allegation the kingdom denies.

US President Donald Trump has been accused of helping the Saudi government cover up Khashoggi’s killing, first by calling it a “rogue” operation – a word echoed by Saudi officials, including most recently by Adel al-Jubeir, the Saudi minister of state for foreign affairs. US Secretary of State Mike Pompeo denied the allegation, telling reporters earlier this month, “America is not covering up for a murder”.

Pompeo’s comments came after a group of bipartisan senators invoked the Magnitsky Act on October 10 giving the Trump administration 120 days to report back their findings on whether they believed the government had a helping hand in committing human rights violations.

Trump did not meet his legally mandated deadline on February 9. Pompeo reportedly sent a letter to Congress on that day, but several senators have said the letter did not satisfy the requirements of the Magnitsky Act.

‘The American people have a right to know’

“I and other believe that the American people have a right to know what this administration knows about this horrendous and gruesome killing,” Senator Ron Wyden, lead sponsor of the bill and senior member of the Senate Intelligence Committee, told Al Jazeera.

“Among the intelligence committees, I am not going to get into anything classified, but you are talking about open source materials, a prominent journalist murdered in a gruesome way,” Wyden said.

“As you know, the Senate voted in a way that suggest that” MBS was involved, Wyden added.

In December, the US Senate voted unanimously on a nonbinding resolution that blamed to the Saudi crown prince.

“For all practical purposes, the Senate is already on record saying what we thought happened,” Wyden said.

The proposed resolution would require the Director of National Intelligence to submit to Congress a report on the death of Khashoggi within 30 days after the bill is enacted.

“Such report shall include identification of those who carried out, participated in, ordered, or were otherwise complicit in or responsible for the death of Jamal Khashoggi,” the bill states.

Ahmed Bedier, president of United Voices of America and founder of the Justice for Jamal campaign, welcomed the bill.

“[The bill] sends a message to the White House that the Senate is not going to let this matter go,” he told Al Jazeera. “And they’re not going to tolerate some kind of cover-up,” he added.

“They are using the tools they have to demand oversight and bypass the White House and go to the director of intelligence to demand a report.”

Bedier said the move would allow senators to get a comprehensive report, which would include CIA, FBI, NSA and other intelligence findings.

While the majority of senators who pushed for the legislation are Democrats, the Senate has previously shown bipartisan support in the Khashoggi case in demanding answers from the US government over his killing.

“The timing is significant, [Jared] Kushner is preparing to meet Mohammed bin Salman in the Middle East,” Bedier said. “They are bringing the issue back to the fore, this will continue to [place] a dark cloud over Mohammed bin Salman that this issue is not going away,” he added. “I think the senators also have this in mind.”

Last year, the Khashoggi killing proved to be a tipping point for several politicians, who had long voiced frustration over US support for the Saudi-UAE war in Yemen.

Earlier this month, the House of Representative passed a resolution to end US support for the Saudi-led war in Yemen. The measure was seen as a strong rebuke to Trump.