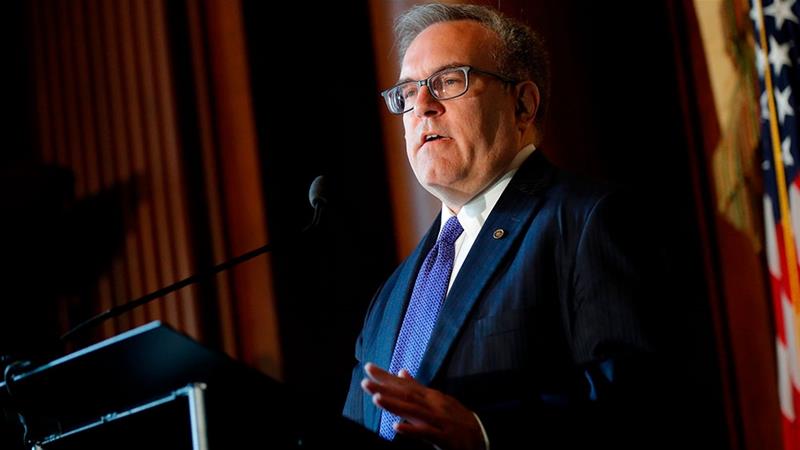 The Senate on Thursday confirmed US President Donald Trump’s candidate, a former coal lobbyist, to lead the nation’s top environmental regulator over the objections of conservation groups and Democrats.

Environmental Protection Agency (EPA) Acting Administrator Andrew Wheeler, a 54-year-old Washington insider with years of experience working as a congressional staffer, was nominated by Trump in January to permanently replace Scott Pruitt, who resigned in July after widespread criticism over his spending and conduct in office.

Wheeler worked at the EPA early in his career and was a top aide at the Senate Environment Committee before becoming a lobbyist a decade ago.

Only one Republican in the Republican-controlled Senate opposed Wheeler as the Senate voted 52-47 to confirm him on Thursday.

Susan Collins argued Wheeler’s efforts to roll back standards on emissions blamed for climate change takes the country in the wrong direction.

Meanwhile, Republican Senator John Barrasso, chairman of the Senate environment committee, called Wheeler “uniquely qualified” to lead the EPA and said that under Wheeler the agency was putting forward proposals that “both protect our environment and allow the country’s economy to flourish”.

Wheeler’s nomination has been welcomed by businesses eager to see reduced regulation, but upset Democrats and conservation groups worried that environmental rollbacks under the Trump administration were going too far.

Environmental groups said that although Wheeler’s behaviour was “less cartoonish” than Pruitt, he supported the same policies.

While running the EPA on an interim basis, Wheeler oversaw the weakening of Obama-era rules limiting carbon and mercury emissions from power plants and standards on carbon dioxide emissions from cars and trucks.

He has also advanced an initiative to lift a summertime ban on higher ethanol blends of gasoline that was enacted to curb smog.

During his confirmation hearing in January, he said he did not believe climate change was a major crisis – a stance that resonates with Trump’s scepticism, but which clashes with the scientific consensus that global warming will have devastating consequences if not addressed urgently.

“Throughout his career, Andrew Wheeler has shown a clear disregard for the EPA’s mission to protect the public and environment,” Democratic Senator Dianne Feinstein said after voting against him.

Wheeler was not making “meaningful progress” on clean water standards either, Democrat Joe Manchin said, citing the agency’s failure to limit the amount of highly toxic chemicals contaminating drinking water in West Virginia and around the country.

The EPA has announced plans to place legal limits on the chemicals but has not done so yet. The perfluoroalkyl and polyfluoroalkyl substances, known collectively as PFAS, have been linked to health threats ranging from cancer to decreased fertility.

Manchin also said he was concerned at EPA’s attempt to undo rules designed to limit emissions of mercury, which can damage the brains of infants and young children.