The US president’s comments come as secretary of state told allies that Washington will continue the fight against ISIL. 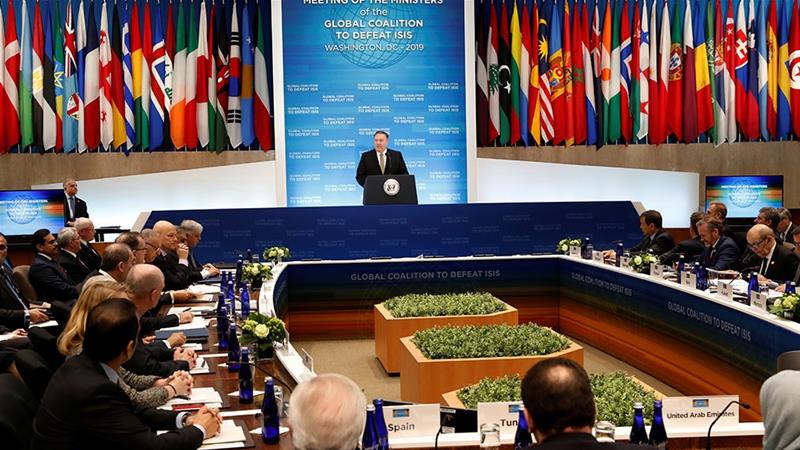 US Secretary of State Mike Pompeo on Wednesday reassured coalition partners that the withdrawal of US troops from Syria was not “the end of America’s fight” and called on them to help permanently defeat the Islamic State of Iraq and the Levant (ISIL) in Syria and Iraq.

“The US troops withdrawing from Syria is not the end of America’s fight. The fight is one we will continue to wage alongside you,” Pompeo said, addressing foreign ministers and other senior officials from 79 countries that have worked alongside the United States in fighting the armed group in Syria and Iraq.

Despite US President Donald Trump declaring “mission accomplished” in December, Pompeo said the troop withdrawal was “essentially a tactical change … not a change in the mission”.

“It simply represents a new stage in an old fight,” Pompeo said, adding that although progress has been made in defeating ISIL, the group remained a dangerous threat.

‘Difficult to keep up the pressure’

The conference started hours after Trump, in his State of the Union address, lauded what he said was the near-complete victory over ISIL. He also reaffirmed his determination to pull out roughly 2,000 US troops from Syria. He had said in December that the pullout would proceed quickly.

Addressing Wednesday’s gathering of foreign ministers, the US president said he expected a formal announcement as early as next week that the coalition fighting ISIL, also known as ISIS, had reclaimed all of the territory previously held by the armed group in Syria and Iraq.

“It should be formally announced sometime, probably next week, that we will have 100 percent of the caliphate,” Trump said in his speech.

Trump’s surprise end-of-the-year announcement about the troop withdrawal prompted the resignation of Defense Secretary James Mattis and the early departure of the top US envoy in the anti-ISIL fight, Brett McGurk.

The president also received pushback from US military leaders who argue that ISIL remains a threat and could regroup after the US leaves.

Even as Pompeo spoke on Wednesday, a senior military official acknowledged to politicians that with the pullout, “it is going to be difficult to keep up the pressure”.

Major General James Hecker, the vice director of operations for the Joint Chiefs of Staff, told the House Armed Services Committee that “there will be a decrease in the amount of pressure that we will be able to apply”. Hecker said others would have to carry the burden once the US left.

Pompeo called on the coalition to increase intelligence-sharing, repatriate and prosecute captured foreign fighters and accelerate stabilisation efforts so that ISIL remnants could reconstitute in Iraq, Syria or elsewhere.

He said that the US “mission is unwavering, but we need your help to accomplish it, just as we’ve had over the past months and years”.

Pompeo said, “To that end, we ask that our coalition partners seriously and rapidly consider requests that will enable our efforts to continue. Those requests are likely to come very soon.” He did not elaborate. 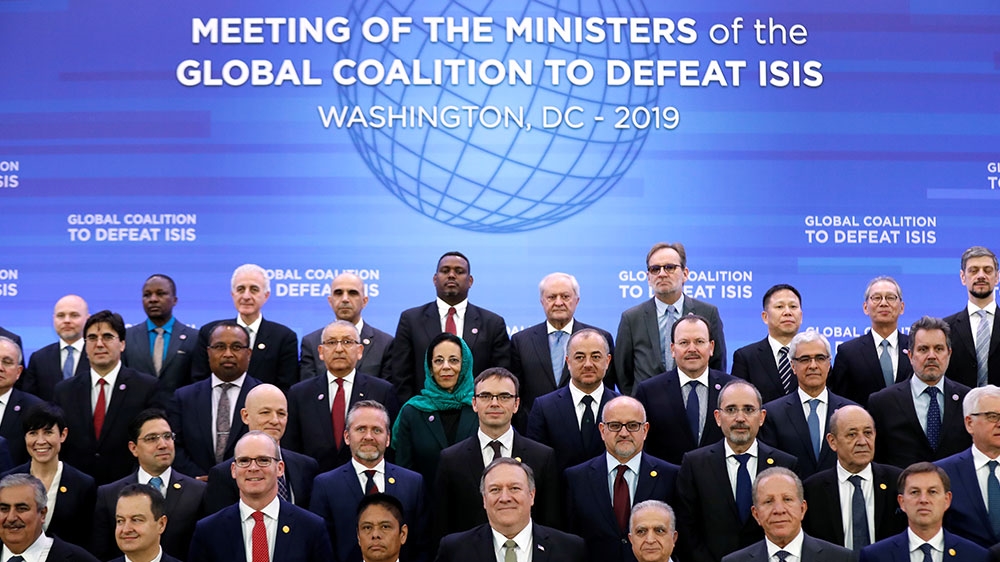 Earlier this week, Trump said it was important to keep a US military presence in Iraq so that Washington could keep a close eye on Iran, according to a CBS interview aired on Sunday.

However, Iraqi President Barham Salih said on Monday that Trump did not ask Iraq’s permission for US troops stationed there to “watch Iran”. The US and Iran are Iraq’s two biggest allies.

On Wednesday, Hakim, apparently responding to Trump’s comment, called on countries to show full “respect for the territorial integrity of Iraq and for all operations to take place with the knowledge of Iraq, and in consultations with Iraqi security forces”.

The 79-member Global Coalition to Defeat ISIS was formed in 2014 and works to reduce the threat the armed group poses to international security and US homelands.

Trump is scheduled to address the coalition at 20:00GMT.