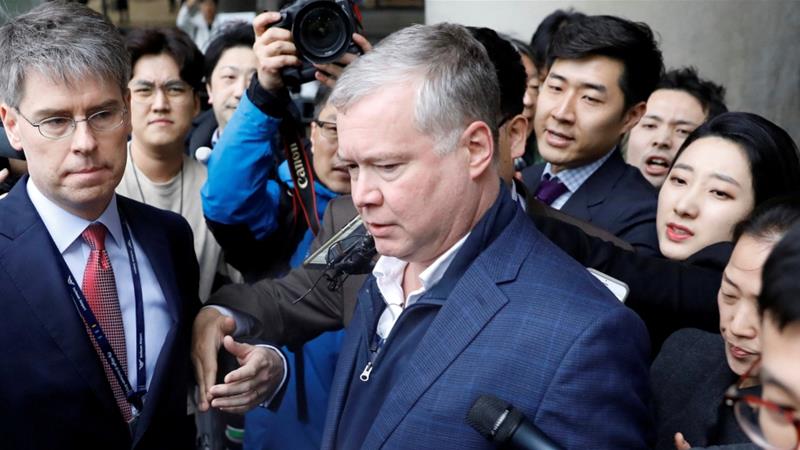 The US State Department has said Washington’s special envoy for North Korea would head to Pyongyang on Wednesday to hold preparatory talks for a second summit between President Donald Trump and North Korean leader Kim Jong Un.

The statement on Monday came days after US envoy Stephen Biegun said he aimed in working-level negotiations with his new North Korean counterpart, Kim Hyok Chol, to map out “a set of concrete deliverables” for the much-anticipated meeting, which is expected to take place at the end of February, most likely in Vietnam.

In an interview with CBS’ Face the Nation programme on Sunday, Trump said the upcoming summit with Kim “is set”, adding that he saw a “good chance” of the two sides reaching a deal on denuclearisation.

“I think he’s also tired of going through what he’s going through,” said Trump, referring to the international sanctions pressing on Kim’s government.

“He has a chance to have North Korea be a tremendous economic behemoth,” Trump added. “He can’t do that with nuclear weapons and he can’t do that on the path they’re on now.”

In his annual New Year’s address last month, Kim renewed his commitment to denuclearisation but warned that he might have no option but to seek an alternative course if the United States did not take corresponding measures and maintained sanctions.

“I am ready to sit with the US president again at any time in the future and will make efforts by all means to produce a result that will be welcomed by the international community,” Kim said.

The first meeting between Kim and Trump last June in Singapore produced a vaguely worded document in which the North Korean leader pledged to work towards “the denuclearisation of the Korean Peninsula”.

But progress has since stalled with the two sides disagreeing over the interpretation of their agreement.