Donald Trump and Joe Biden now have fewer than two weeks until Americans cast their ballot in the US election, which will serve as a vital referendum on the current President’s leadership. Mr Trump has made his country one of the most dangerous places at the moment, with a sky-high fatality rate from COVID-19 having claimed more than 210,000 people. The magnitude of the epidemic has forced millions of people into early voting, which now informs pollsters analysing the race as it continues to gather momentum.

The first sparks of the 2020 election surfaced at the end of 2019, when Democrats competed in their COVID-free primary race.

At the time, experts had concluded high election chances for Mr Trump regardless of his competitor, on the basis of a steady economy and consistent job levels.

But COVID-19 has brought his imperfect leadership into harsh focus, thoroughly destabilising the Republican position.

Although Democrat competitors have faced an uphill battle in several states, many of which host a deeply entrenched GOP, they have started to turn the tide in their favour.

According to the polls, their challengers have started to chip away at some seemingly impenetrable Republican presence.

The latest data from analysts with Betfair shows Democrats have brought the fight to some of the most historically red states. Express.co.uk and Betfair have exclusively analysed the data to find out how each candidate will fare in every state in America.

You can see the map projections below but read on to find out how the voting intentions have changed as the race to the White House hots up. 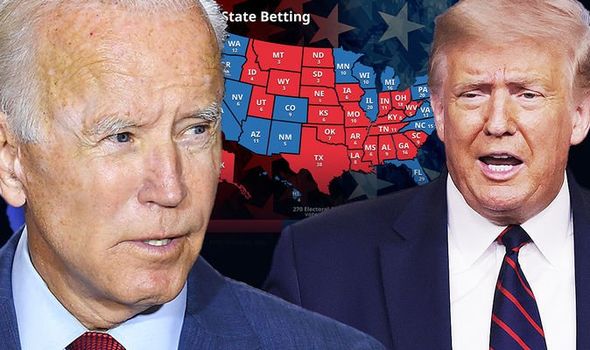 One of the most surprising findings from their latest statistics show a growing blue presence in Texas, where the GOP has historically held odds of 1/100.

Now, the party is trading between 2/5 and 3/10, and while the Democrats are still unlikely to flip the state, they have attained chances of 11/4.

They have failed to make similar gains in Ohio to the north west, which has traditionally oscillated between red and blue.

As a swing state with 18 Electoral College votes, Ohio is a high-value target where the GOP now brandishes a 1/2 lead over the Democrats on 15/8.

Mr Biden has shored up support on the other side of the country in Nevada, however, where President Trump held a minimal two point lead over Hillary Clinton in 2016.

The odds Democrats will win the state have held fast at 2/5, while the GOP lags on 5/2.

They have found similar success so far across the border in Arizona, where their odds of winning sit at 4/6 to the GOP’s 11/8.

Arizona is one of several swing states either party could contest, but Democrats have edged ahead here. 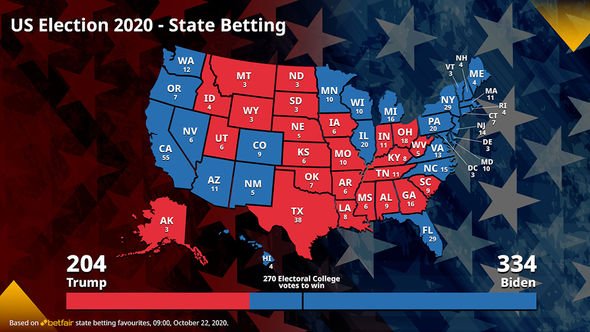 Odds in centre states remain more of a tossup affair, but still have a blue advantage such as in Wisconsin, where Mr Biden has curated odds of 2/5 to Mr Trump’s 9/4. The numbers have slimmed considerably since May when the Democrats had 10/11 and GOP 11/10.

One of the most coveted prizes in the election, Florida, is the toughest state to call. The state has 29 available Electoral College votes, rivalling just Texas, and saw Mr Trump win on another slim margin in 2016.

Democrats and Republicans have locked horns and emerged with near-identical odds of 20/21 and 21/20 respectively. Despite a slim blue lead, the one point could go either way as the election approaches.

The Democrats hold the greatest advantage in Pennsylvania and North Carolina with a consistent lead over the Republicans. Although their odds flip-flopped slightly in the latter state, they have an advantage of 2/5 and 4/5 respectively over the GOP’s 9/4 and 6/5.

But Iowa and Georgia will likely remain red, as they have elapsed on to a solid lead throughout the race.

DON’T MISS
Donald Trump vs Joe Biden odds – swingometer predicts who will win – ANALYSIS
When is the next Presidential debate for the 2020 election? – EXPLAINER
US election POLL: Would a Trump or Biden victory be better for Brexit? – POLL 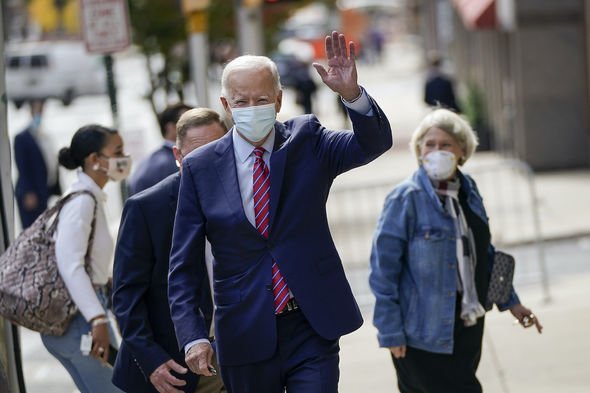 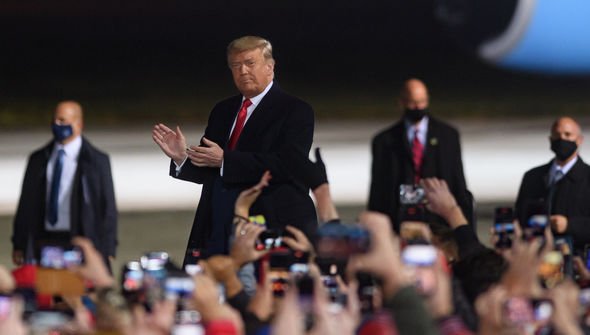 That’s that for the key states in this election battle, but what about the other 40 states left to call in this two-horse race? Well, we’ve got the data on those too.

You’ll find the latest odds plus interesting insight from Betfair below. 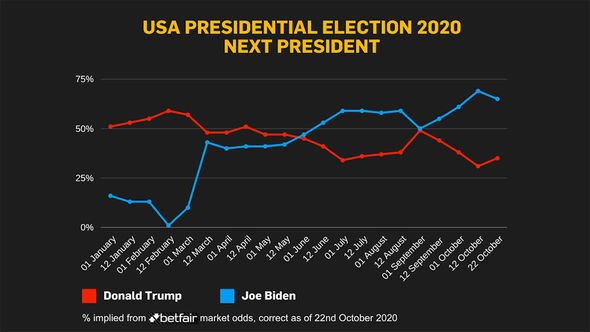 New Hampshire- GOP 4/1, Dems 2/9. Dems 1/2 until mid-summer, tightened up consistently since then.

Utah- GOP 1/25, Dems 20/1. GOP as big as 1/5 in June, but historically strong red state and have shortened accordingly since.

Related posts:
Hot News
Hiring of 200 staff for Grab-Singtel bank under way
Tesla says Black people hold just 4% of its U.S. leadership roles
Brexit fury: Boris savaged over EU trade deal – ‘UK has got this wrong all along!’
Brexit POLL: Should MPs vote to block Boris Johnson’s deal if he sells out fishing? VOTE
The Crown urged to show who really killed Princess Diana in tragic car crash
Recent Posts
This website uses cookies to improve your user experience and to provide you with advertisements that are relevant to your interests. By continuing to browse the site you are agreeing to our use of cookies.Ok