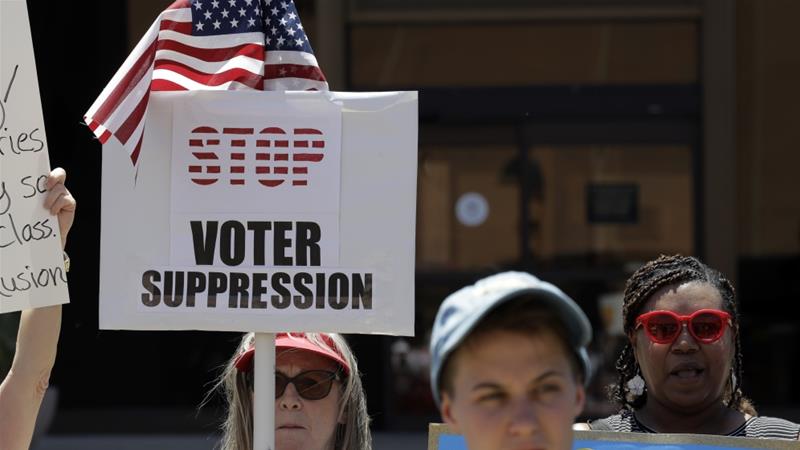 “When Americans are not able to cast their ballot, their voices are left behind,” tweeted Alabama Representative Terri Sewell, who is the main sponsor of the Voting Rights Advancement Act in the House of Representatives.

“A strong democracy removes barriers and improves access, so EVERY citizen can vote. We MUST restore the [Voters’ Rights Act] and #RestoreTheVote,” she added. “We have inherited their legacy, and the fight to ensure that all Americans can participate in our political process continues today.”

The bill is meant to address what Sewell and rights advocates call a hole in that current law, which was stripped of certain protections in a 2013 Supreme Court ruling.

That decision removed an enforcement mechanism that prevented states with a history of voting discrimination from changing their voting laws without federal approval.

Rights organisations and politicians have said voter fraud and violations have been on the rise ever since.

“Voter suppression efforts are unacceptable and un-American. But because of a disastrous Supreme Court decision, they are almost impossible to stop,” said Democratic Senator Patrick Leahy, the bill’s main sponsor in the Senate.

According to Human Rights Campaign, a civil rights organisation, states have “brazenly” pushed forward discriminatory changes to voting rules and practices, including instituting greater voter identification laws and changing district boundaries without prior notice, leaving voters at a disadvantage.

In the last eight years, the Brennan Center for Justice found that 13 states introduced or tightened restrictive voter ID laws, 11 have laws making it harder for citizens to register, seven cut back on early voting opportunities, and three moved to make it more difficult to return voting rights to people with criminal convictions.

The 2018 midterm elections saw voter suppression accusations in a number of states, including Georgia, North Dakota and Alabama.

The proposed bill would develop a process to determine which states would need to clear election changes with the Department of Justice.

“It would also require a nationwide, practice-based pre-clearance of known discriminatory practices, including the creation of at-large districts, inadequate multilingual voting materials and cuts to polling places,” Sewell’s office said in a statement.