With no civilians emerging from Baghouz in days, US-backed militia says final battle is now under way. 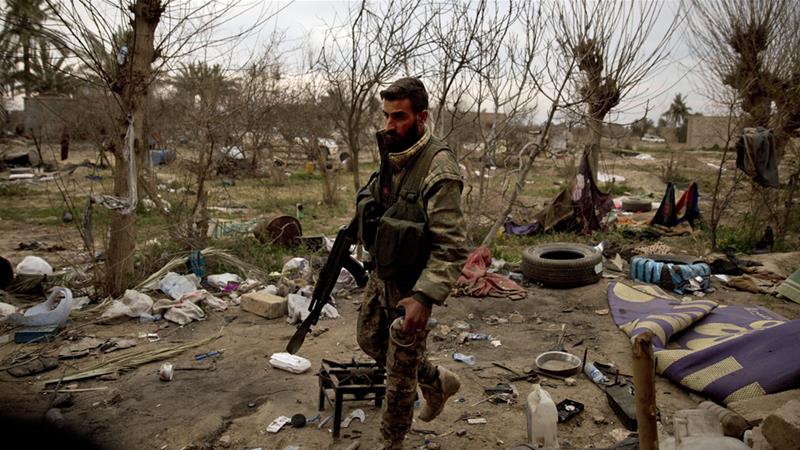 The US-backed Syrian Democratic Forces (SDF) resumed their assault against the last ISIL enclave in eastern Syria, aiming to wipe out the last vestige of its self-declared “caliphate” that once spanned one-third of Iraq and Syria.

Explosions and fires illuminated columns of smoke over Baghouz village after the Kurdish-led SDF launched the offensive around 6pm (16:00 GMT) on Sunday. The fighting began anew after a deadline for the group’s armed men to surrender expired.

“We have been able to liberate a number of positions from them. We are currently advancing with the support of the international coalition from the air and on the ground as well,” he said.

While Baghouz represents the last shred of populated land held by the Islamic State of Iraq and the Levant’s (ISIL or ISIS) fighters, the armed group is still widely seen as a big security threat with remote territory elsewhere and the continued capacity to launch attacks.

The SDF have been poised to advance into the enclave for weeks, but have repeatedly held back to allow for the evacuation of civilians, many of them wives and children of ISIL fighters.

Mustafa Bali, the head of the SDF media office, said on Sunday no further civilians had emerged from the enclave at the Iraqi border since Saturday and the SDF had not observed any more civilians in the area, prompting the decision to attack.

“The military operations have started. Our forces are now clashing with the terrorists and the attack started,” he said.

Bali said the SDF had given the ISIL fighters time to surrender, and that time was over.

Tens of thousands of people have streamed out of the shrinking territory held by the ISIL in recent months. Aid agencies in the area are struggling to cope with the influx, according to NGOs, including Save the Children.

Bali said more than 4,000 fighters had surrendered to the SDF in the past month.

Earlier on Sunday, a correspondent of the Reuters news agency saw the SDF advance into a tented area of Baghouz after the ISIL fighters withdrew from it. The SDF fighters gathered some ammunition and rifles left behind by the armed group.

The SDF announced the military operation to capture Baghouz in September, but has held off a full-blown assault after it became apparent that a huge number of civilians were still inside.

Syrian military air raids against the ISIL fighters further west in the country’s central desert were a reminder of the constant warnings by both Arab and Western officials that the group will continue to pose a serious security threat.

After its sudden advance across swaths of Syria and Iraq in 2014, the group held about one-third of both countries, but its wholesale slaughter or sexual enslavement of minorities and its grotesque public killings roused global anger.

Separate offensives by different forces in both countries steadily drove it back, inflicting major ISIL defeats in 2017, and eventually forcing it back on Baghouz, a little cluster of hamlets and farmland on the Euphrates.