Low pressure from the Atlantic has brought snow and rain sleet from northern regions down as far as London today. The Met Office has issued a yellow warning for snow for much of the midlands today that will remain in place until midnight. Drivers are also being warned the sleet and snow is expected to cause travel chaos.

Snow charts show the wintry weather will continue until next week.

Up to eight inches of snow is forecast to fall near Inverness, northern Scotland on Sunday, with temperatures expected to fall as low as -4C.

This level of snow will stay until next Thursday, March 5, with snow settling on the ground until then too in Cumbria and Liverpool.

Northern Ireland will also see a couple of inches of snow over the weekend.

On Sunday, there will be lows of -2C in Scotland, and 0C in Southampton and Cardiff. 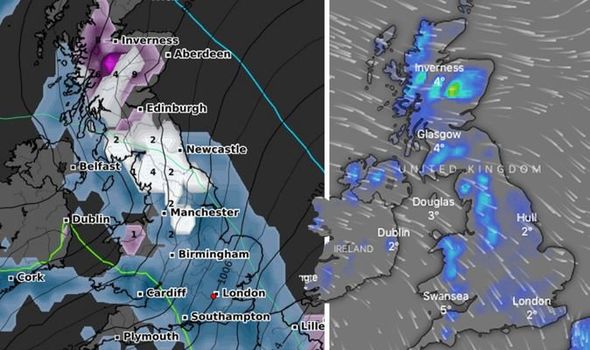 A fierce wind chill on Saturday will cause temperatures to plummet to -8C in both Scotland and Liverpool.

This subzero chill will stay in place early next week as winds will average -4C around the UK on Monday.

Meteorologist Alex Burkill said: “It’s not just the snow, there’s going to be a fair bit of rainfall mixed in with it.

“It’s not going to be large amounts, between 10-15mm of rain in some places, but it could be falling on heavily saturated areas.” 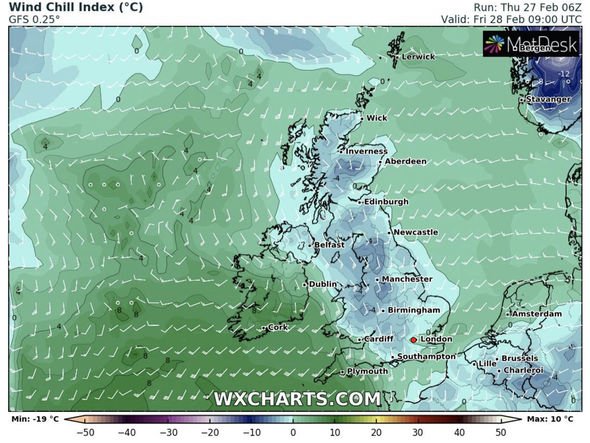 He said: “It’s been a wintry start to the day, with parts of the Northwest of England and Scotland waking up to a fresh covering of snow, even at lower levels.

“Further south, low pressure has brought a mix of rain sleet and snow, which will slowly clear southeast this morning.

“Any settling snow here has been reserved for higher ground, lower down any wintriness is mostly comprised of wet snow or sleet.” 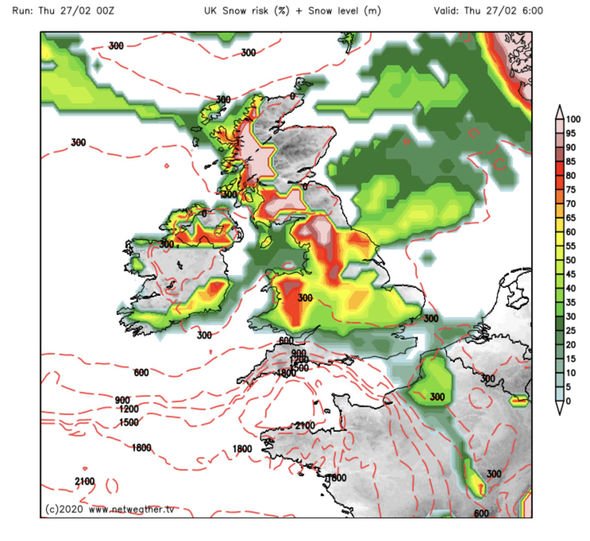 Mr Michaelwaite added the wintry weather will keep sweeping over the nation on Friday as well.

He said: “The wintry showers in western Scotland will continue though, and thickening cloud from the west will slowly raise temperatures here.

“Rain with some sleet and snow over the hills will start to move up from the southwest into Ireland by midnight, getting into southwest England and Wales during the early hours.

“That’ll then spread its way northeast during Friday – bringing some heavy rain at times – particularly across Wales and Northwest England, and also the potential for some accumulating snow up over the high ground of northern England and Scotland.” 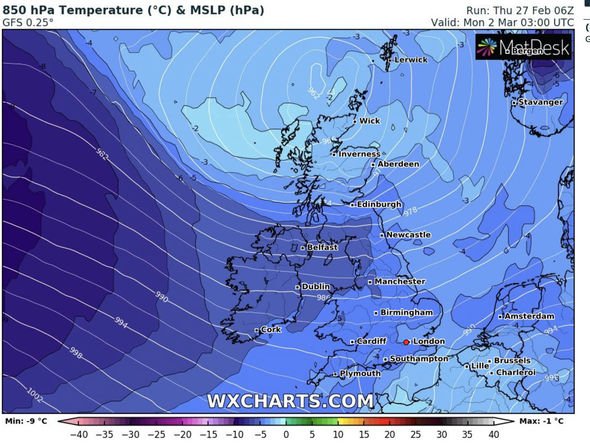 And powerful winds will bring more snow to northern England and Scotland over the weekend.

Mr Michaelwaite said: “As the low pressure bringing the rain moves in, winds will strengthen more widely as we move into the weekend.

“The wet weather will spread northeast during the latter part of Friday and overnight, bringing more heavy rain to those areas which need it least.

“It should all move through relatively quickly though, clearing the east and north of the country during Saturday morning. 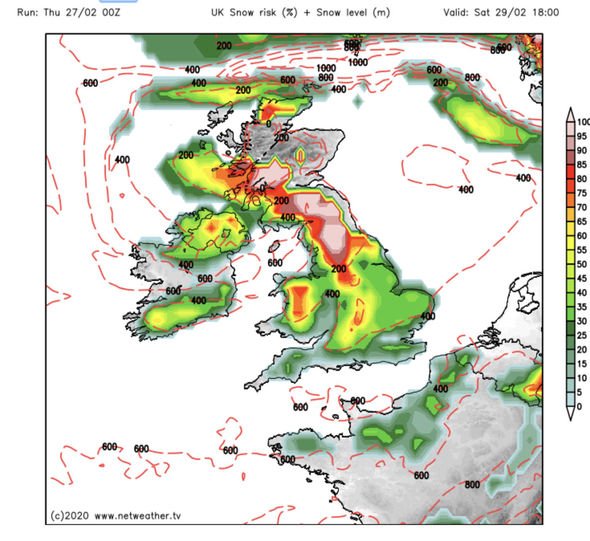 “We’ll not be out of the woods behind the rain band though, as the low will be moving in afterwards – crossing Ireland and then Northern England or Southern Scotland during the day.

“With it will be a good number of showers – some of which may merge.

“And with the air now colder again, these will fall as sleet or snow over the hills in particular.

“It’ll be windy too, with gales, perhaps even severe gales likely in exposed places, and the winds will stay blustery right through into Sunday.”