Severe gales will batter northern parts of the UK today with wind speeds reaching a staggering 75mph in some parts. Some snow is expected in parts of the Highlands in Scotland, while the rest of the UK will see a band of rain travel southwards, according to the latest weather maps.

The Met Ofice has a yellow weather warning for wind in place for the northern isles of Scotland from 5am this morning until 1pm this afternoon.

The warning reads: “Southwesterly gales will increase further through Saturday morning with gusts of 60-65 mph expected across the Northern Isles.

“Blustery showers will bring some temporarily stronger gusts as well with 75 mph possible for brief periods. The strongest winds are expected during Saturday morning before easing a little through Saturday afternoon, although gusts to around 60-65 mph will continue.”

Express.co.uk has all the latest weather forecast updates and news below. All times in GMT. 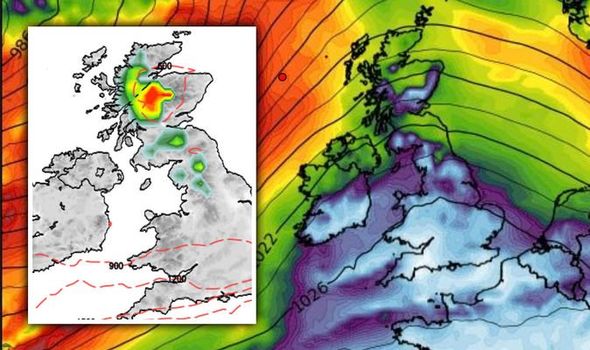 7.25am update: BBC Weather’s snapshot of the weather today

The forecaster tweeted we’d see rain pushing into northern England and Wales today as the day progresses, with plenty of cloud in the skies.

Temperatures will stay mild but will turn cooled “with heavy showers and strong winds mind”.

Brighter in Scotland and Northern Ireland but windy as those gales with up speeds of up to 75mph.

7.00am update: Todays’ forecast from the Met Office

The Met Office forecast for today reads: “Blustery showers across Scotland with coastal gales in far north. Band of rain moving south, reaching Wales and southwest England by evening while many south-eastern areas stay dry with some brighter skies at times.”

Into tonight we’ll see “further blustery showers in north” but it will become “dry across many central areas with clear periods developing, as rain band continues south to become slow moving along the south coast by dawn.”