Storm Ciara, Storm Dennis and Storm Jorge impacted the UK in February, bringing record-breaking levels of rain and devastating winds. So much rain fell last month that the Met Office has recorded it the wettest February on record for UK, England, Wales and Northern Ireland.

Across the UK, 8.23 inches fell in February an anomaly of 237 percent based on previous years.

The heavy rainfall across the month resulted in some severe impacts with many areas flooded, including parts of Yorkshire, Wales and the Midlands.

John Curtin, Executive Director for Flood Risk Management at the Environment Agency said: “Record February rainfall and river levels have tested the nation’s flood defences; however we have been able to protect over 80,000 homes thanks to the action we have taken.

“Every flooded home is a personal tragedy, and with a changing climate, we will need to become more resilient to flooding. 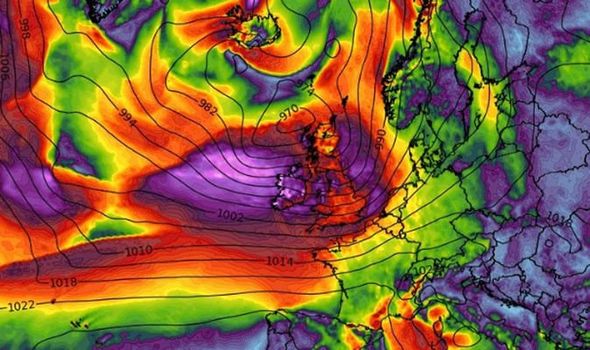 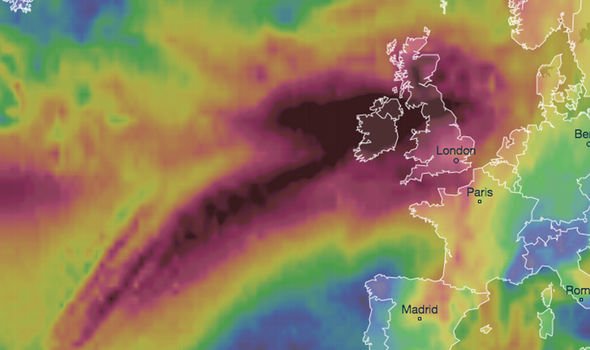 “I’d urge the public to be aware of their flood risk, sign up to flood warnings, and make a flood plan if they are at risk.”

Now, weather maps for this weekend show another bout of strong winds and heavy rain to hit the UK.

Maps from WXCharts show strong winds reaching the UK on Sunday stretching into Monday, with a mass of purple winds covering the entire country.

Some snow is also forecast, with the potential for heavy snow cover in the north of England and Scotland. 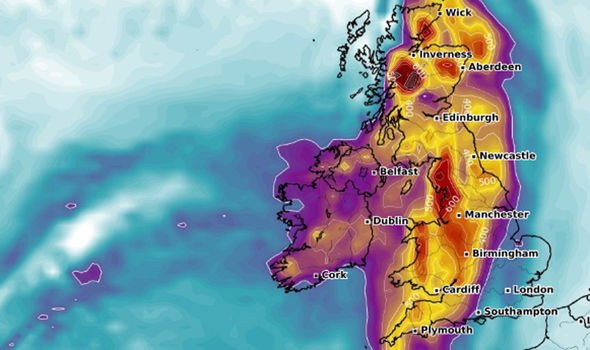 Met Office forecaster Marco Petagna said: “It’s going from bad to worse, with more rain topping up rivers. The weather is in no hurry to leap into spring.

“Jorge really wound itself up, with explosive cyclogenesis and a pounding for the UK.

“Cold air coming straight down from Greenland means temperatures close to the coldest of winter from Sunday night to Tuesday night, with down to -9C in Scotland overlying snow, -6C in northern England and -4C in the South.

“Snow in the week is likely in northern England and Scotland, with a chance to lower levels. Central and southern areas may have occasional hill snow, including on the North and South Downs.

“There are ice risks in places and Wednesday into Thursday is forecast more rain and gusts up to 50-60mph in the South. It stays wet, windy and chilly into next weekend.”

Met Office weather maps show rain across much of the UK this weekend, with Sunday seeing the heaviest of the rain.

Looking further into March, forecasters warn yet more rain and wind is on the cards.

The Met Office forecasts predominantly cold weather with overnight frosts likely during any calmer interludes and only occasional milder days, these being more likely later in the period. 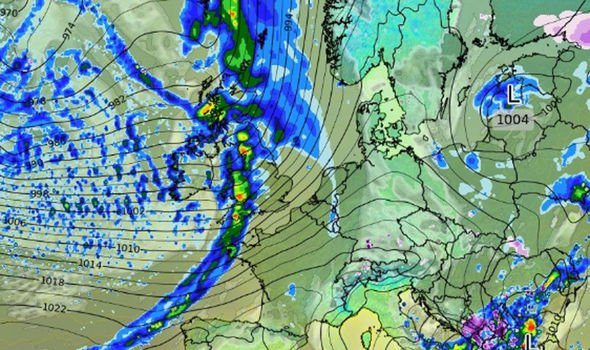 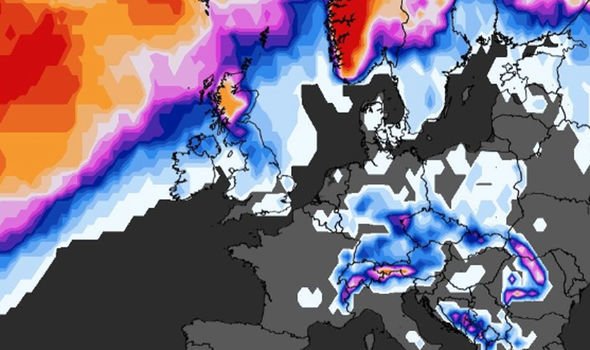 Cloudy with outbreaks of rain moving east across Wales and southern England. Cold for some here but milder in the far southwest.

Further north light winds and some sunshine but also some showers.

Showers in far northwest otherwise another chilly night for northern parts with frost and some fog.

Outlook for Friday to Sunday

Sunny spells on Friday with showers mainly in the west, an early frost for many.

Turning windy over the weekend with rain, heaviest in the west, followed by blustery showers.