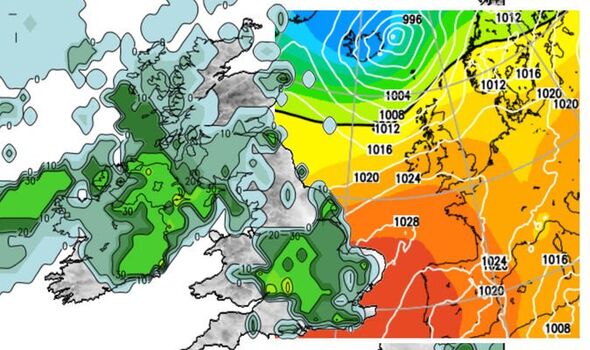 Thermometers will bubble up to fever pitch through the next 24 hours as the nation is engulfed by a plume of tropical Atlantic air. While it will stay mostly dry, sporadic showers will sweep across the country before erupting into furious thunderstorms. Swathes of the UK are braced for some ‘quite lively’ outbursts today, according to the Met Office.

Meteorologist Aidan McGivern said: “Outbreaks of rain will slowly spill across the country on Wednesday working their way from west to east.

“Showers will develop initially across central and western areas making their way further east and into the south through the afternoon.

“Where they occur, there will be hail and thunder, and they will be quite lively things.

“Where we get sunny spells, it will feel quite warm and there will be a noticeable difference in the east.”

Tomorrow is shaping up to be even warmer with the chance of hitting 21C across southern regions, he added.

He said: “It is turning even warmer on Thursday as warmth from the south-west makes its way towards the UK.

“Weather fronts will be coming along into the northwest and that means there will be some persistent rain.

“We could get 21C towards the south and the southeast.

“On Friday it turns a little wetter as a band of rain makes its way from the northwest to the southeast and for much of the day it will be raining for a few hours at least.

“By the weekend, high pressure is going to build back in from the northwest and behind a weather front slightly cooler air arrives, but we keep some warmth in the south on Saturday.”

As temperatures rise, odds on record breaking heat are tumbling with Coral now offering 3-1 from 5-1 on the warmest May ever and Ladbrokes at 6-4 from 2-1.

Spokesman Harry Aitkenhead said: “There is every chance that this month now will enter the record books as the warmest May we have ever had, with temperatures to soar above 20 degrees towards next weekend and the UK to be warmer than Ibiza.”

Ladbrokes’ Alex Apati said: “Temperatures are set to soar in the coming days, and the latest odds suggest this could go down as a record-breaking hot May as a result.”

After an unusually dry April, while gardeners and growers can expect some rainfall this week the outlook remains parched.

Jim Dale, meteorologist for British Weather Services, said: “In the longer term, there is still a fair amount of dry weather around.

“It will be pretty stop-start through the first half of May, although lack of rain is likely to remain a problem across the east.”A plume of warm air will be pulled into Britain this week on a huge region of high pressure stretching from the Atlantic Azores islands.

Mr Dale said: “It will be pleasantly warm in the south especially with temperatures reaching 20C or 21C at times.

“This is the result of an Azores high which will sit on top of the UK keeping rain-bearing systems at bay.

“The outlook for next week is more unsettled.”

Britons can look for another sun-filled weekend with temperatures by then touching the low-20Cs.

Weathertrending’s John Hammond said: “We keep the same trend of a lot of dry weather through the first week of May courtesy of relatively high pressure.

“As we go towards the latter part of the week and the weekend, there is a greater chance of more prolonged sunshine, and temperatures are on the rise.

“There is every chance that we will see the mercury getting up into the low-20Cs.”