Snow forecasts from weather forecasters reveal parts of Britain could see up to six inches in the coming weeks. The Met Office today put two weather warnings into force as wintry showers across Northern Ireland, western Scotland and parts of England look likely to prove hazardous and bring travel chaos.

Maps from weather forecaster WX Charts shows up to six inches of snow could fall across parts of the UK in the next 10 days.

The weather forecaster’s snow depth map reveals on Thursday, March 5, parts of Wales could experience up to six inches (14cm) worth of snowfall.

Ahead of this time, the worst of the snowfall is expected to arrive on Thursday, February 27, where up to (7cm) is forecast.

However, the snowfall forecast map indicates that much of Northern Ireland, Wales, northern and central England will instead see between 0.4 to 1.2 inches (1 to 3cm) of snow. 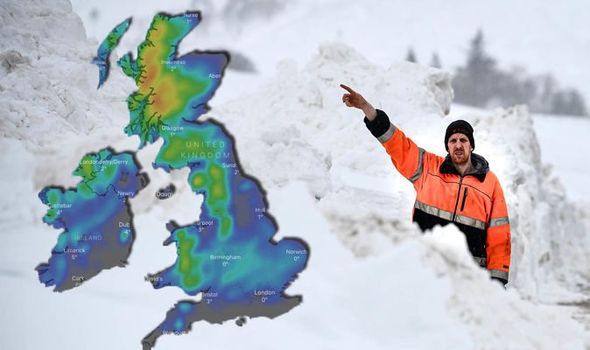 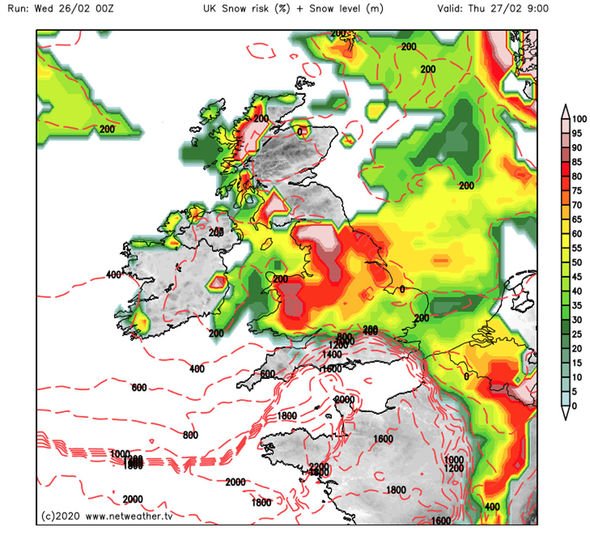 British Weather Services’ Jim Dale said northern Britain could suffer “as a polar front comes down across the country”.

He said: “Through the course of the next 10 days we are going to see a switch to something more wintry.

“Over northern Britain, we are looking at temperatures down to -12C (10.4F) or even lower as a Polar front comes down across the country.

“Where this cold air meets incursions from the Atlantic could be interesting, we are keeping our eyes on snow through this period.

“Snowfall over the coming days will largely be over high ground in Scotland but we may see something elsewhere.

“We are looking at potentially the coldest spell of winter so far, and after the mild weather so far, we are about to get the winter we haven’t had.” 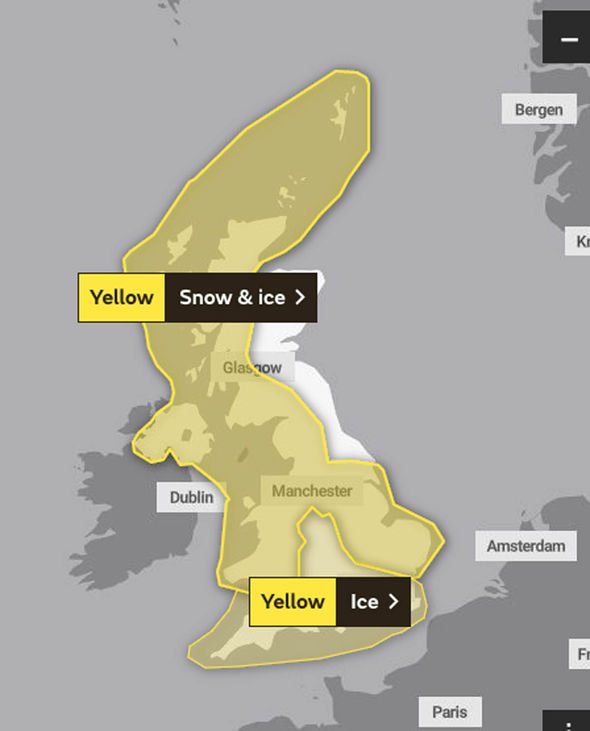 WX Charts has predicted the worst of the snow to hit Scotland today.

The weather forecaster’s snow depth map predicts up to 22 inches (57cm) to hit the Scottish Highlands.

After Thursday, the amount of snow is generally expected to lessen according to WX Charts, with just 18 inches (45cm) expected on March 5, when the heaviest of the snow is expected in Wales.

On Wednesday, the Met Office extended its weather warning across Britain for snow and ice.

The yellow weather warning which is in effect from 10pm on Wednesday to 10am on Thursday warns of wintry showers and icy stretches which will likely to bring some travel disruption.

Predominantly Northern Ireland and western Scotland will be impacted, with northern England, the north Midlands and north Wales later in the night. 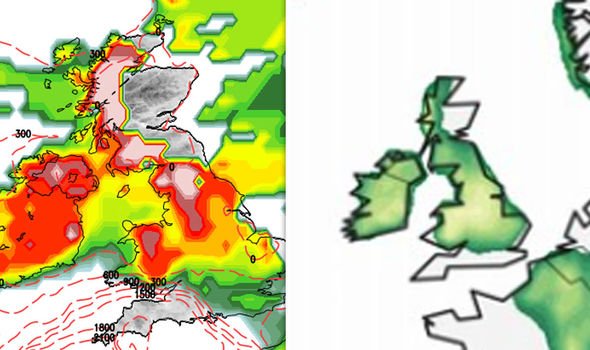 The second yellow weather warning from the Met Office is for snow and is in effect from midnight to 12pm on Thursday.

The warning advises of sleet and snow which could cause some travel disruption.

“Accumulations at these low-levels will be mostly small, especially on roads, but a centimetre or so is possible in one or two places. Rain, sleet and snow will quickly clear southeastwards by late morning and any snow at lower levels will soon thaw.”

The final weather warning in effect is for Friday and Saturday warning of heavy rain which could lead to flooding.

Spells of torrential downpours are likely to affect parts of Wales and northern England during the second half of Friday through to Saturday morning.

Widely up to 1.2 inches (30mm) of rainfall is expected to hit during this time, with up to 2.4 inches forecast for higher ground.

The heaviest rain is most likely on Friday night before clearing eastwards on Saturday morning.