Much of the UK is still reeling from the havoc caused by Storm Dennis, with flood alerts, rain warnings and wind damage. More than a months worth of rain fell in some areas and now according to snow forecast maps, heavy snow is on the way for parts of the country.

Weather maps from WINDY and Netweather show heavy snow blanketing the UK, particularly in Scotland and the North of England.

Met Office spokesperson, Nicola Maxey, told The Sun Online: “There are certainly some heavy showers around and there’s a chance that some of that can fall as snow on high ground. 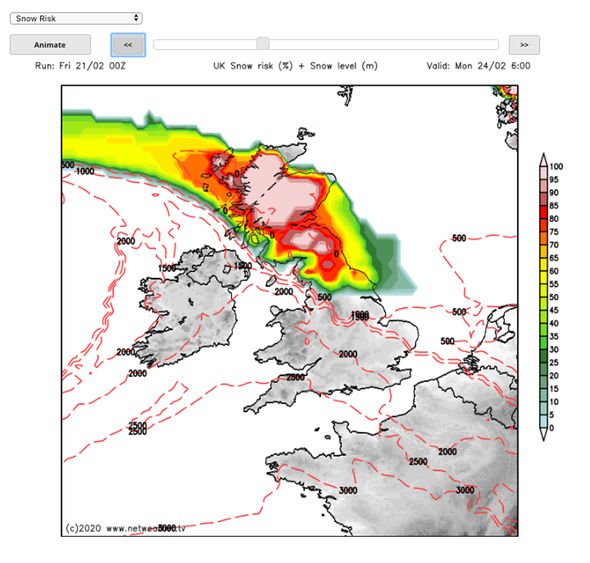 Earlier on Tuesday, a Met Office snow and ice warning was in place for parts of the country.

The Met Office warned snow showers and icy surfaces may lead to some travel disruption during Tuesday morning.

Some roads and railways around the area were likely to be affected with longer journey times by road, bus and train services expected.

Some icy patches were expected on some untreated roads, pavements and cycle paths. 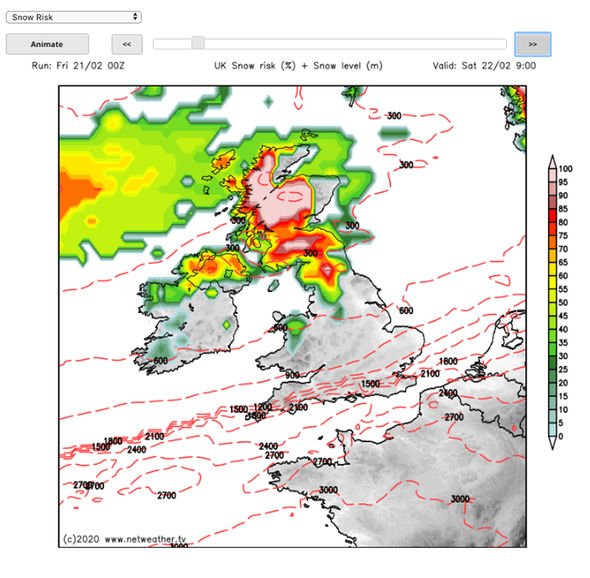 The Met Office forecast for Tuesday is:

Another windy day with a mixture of sunny spells and blustery showers.

Showers will be heavy at times, occasionally with hail and thunder and over hills showers will also be wintry. Feeling chilly.

Early evening showers will gradually become confined to the far north of Scotland.

Colder than Monday night with a touch of frost. Rain then into Cornwall by dawn.

Conditions are expected to remain unsettled this week, with the arrival of an Atlantic weather system bringing heavy rain,

The warning reads: “An Atlantic weather system arriving on Wednesday is expected to bring a further spell of rainfall which is likely to become particularly prolonged over areas of high ground.

“Whilst there is more uncertainty over the rainfall totals for south Wales, there is a small chance that 1.9 to 2.3 inches (50 to 60mm) could fall here in 24 hours.

“There is higher confidence in the rainfall for north-west Wales, with between 2.7 and 3.9 inches (70 and 100mm) of rain most likely. 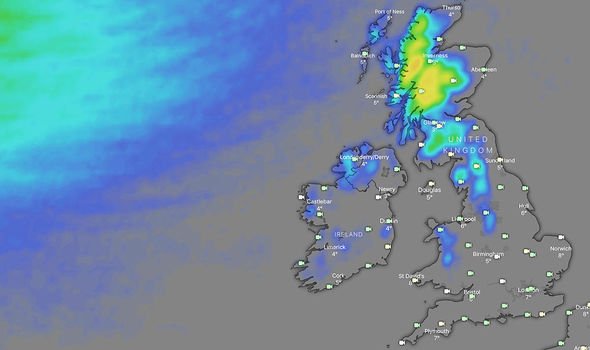 “Given already saturated ground, in south Wales, in particular, there is a small chance of further flooding during this event.”

Areas of the UK are picking up the pieces following devastating floods caused by Storm Dennis.

Storm Dennis hit the UK on Saturday and unleashed torrential rain and severe winds across the country for 48 hours.

Some areas received more than a months worth of rain in just 48 hours.

The Met Office recorded a total of 6.14 inches (156.2mm) of rain at Cray Reservoir in Powys in the 48 hours from Friday to Sunday morning.

According to the Met Office, the average monthly rainfall for February in Wales is 4.37 inches (111.1mm).