Freezing temperatures and wintry conditions are set to strike, with the latest weather charts showing much of the UK can expect a sprinkling of snow by the weekend. The weather front will coincide with plunging temperatures, with lows of -5C forecast across Scotland on Saturday March 27. The rest of the country will see temperatures dip just above freezing.

Netweather’s snow risk charts show wintry conditions are expected to hit Scotland and western parts of the UK from the early hours of Friday morning, before sweeping down the rest of the country.

The chart shows up to an 85 percent risk of snow across Scotland and Northern Ireland, while parts of Wales and north west England have a risk of between 40-80 percent.

By 3pm the snow risk has increased further, with parts of Wales and northern England covered by a 100 percent chance of snow.

As evening approaches, the snow risk has moved further south with the whole of Scotland, northern England and Wales seen to turn red. 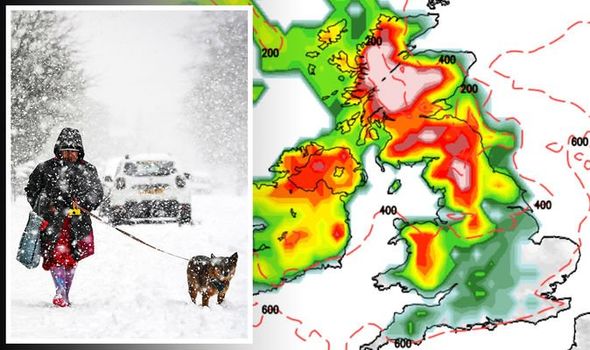 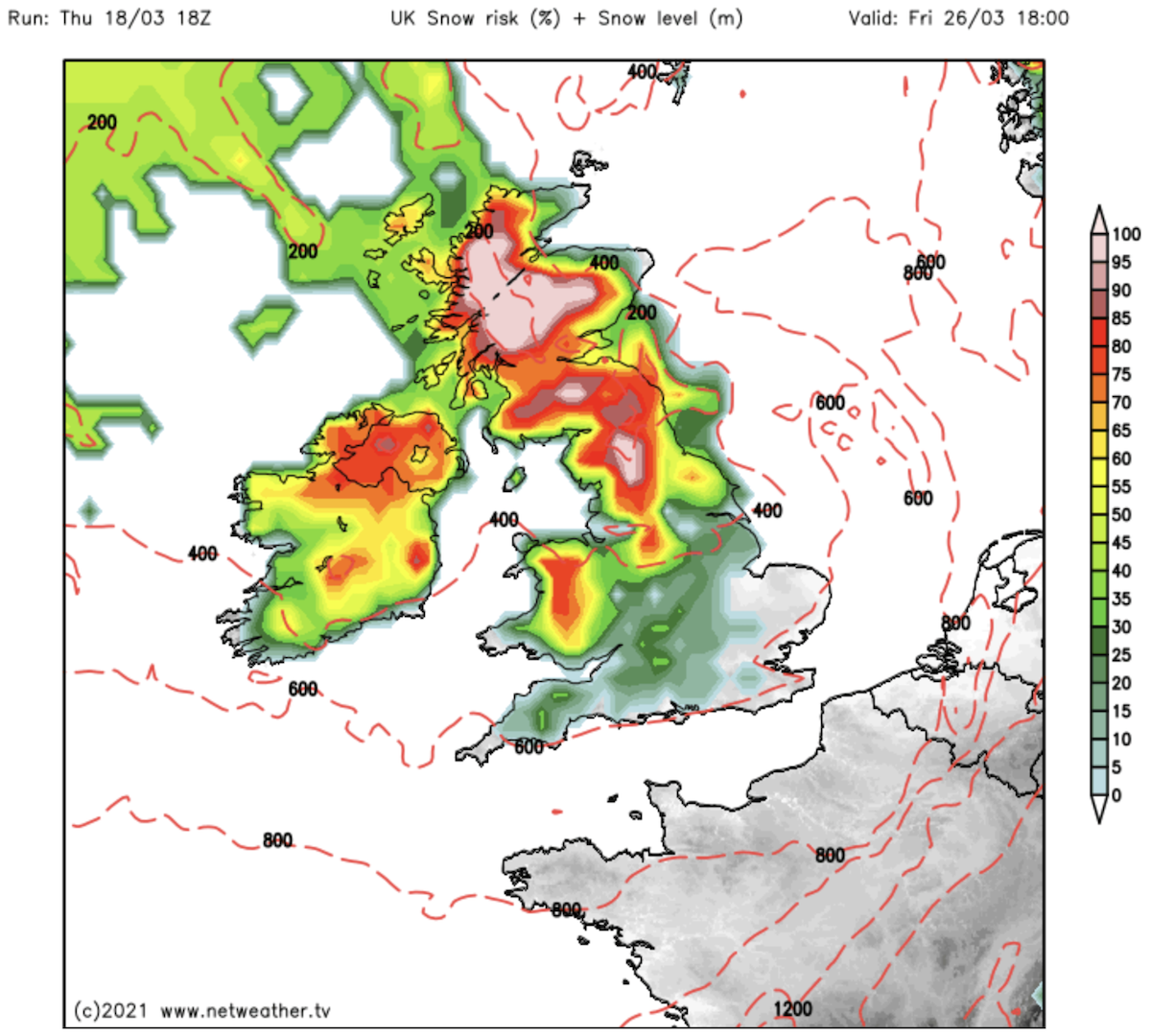 The red and white colourings on the weather map, valid for 6pm, show a high snow risk of between 75-100 percent.

Parts of the Midlands and western England are covered by a low snow risk of up to 35 percent.

The risk of snow eases slightly through Saturday before ramping up again on Sunday night.

The snow risk chart shows much of the UK turn red again at 6am on Sunday morning.

The chart shows most of Scotland covered by a 100 percent risk of snowfall, while northern England, Wales and Northern Ireland are covered by a risk of up to 85 percent.

JUST IN: Britain to bake in ‘early summer’ weather as temperatures sky rocket 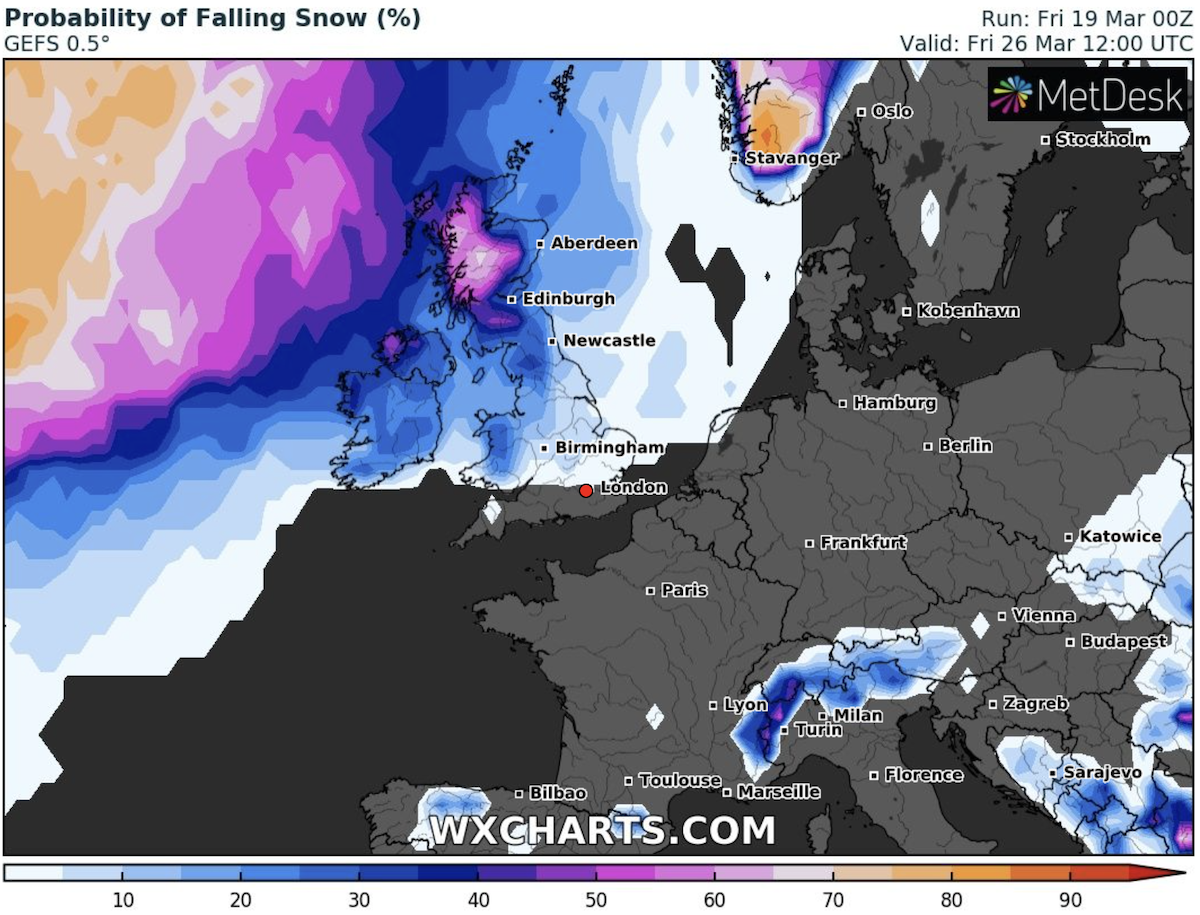 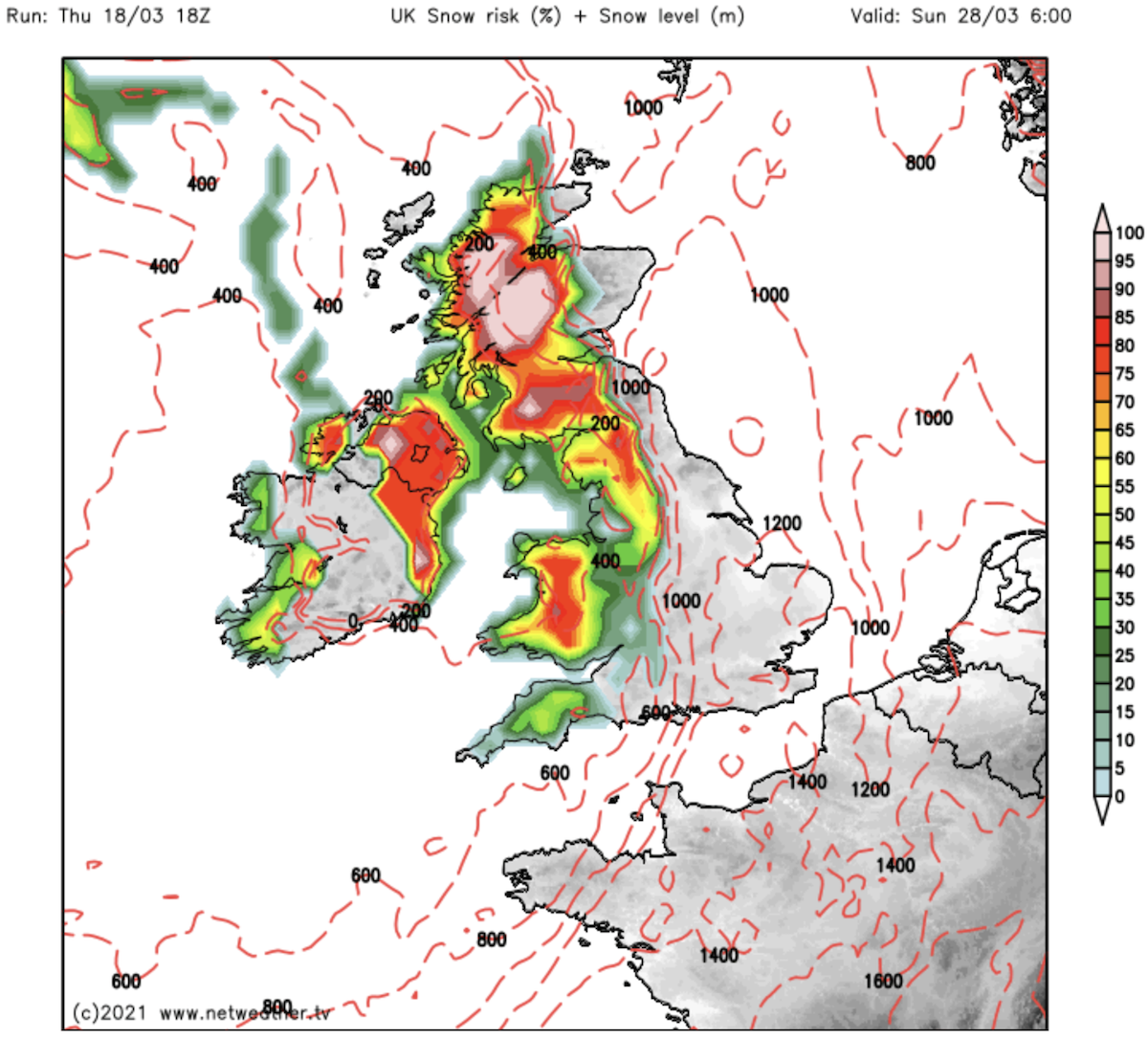 West England has turned green, indicating a risk of up to 40 percent.

Separate snow probability maps by WXCharts show a high risk of snow in Scotland at 12pm on Friday March 26, as shown by the purple colourings.

The west of England and Northern Ireland also carries a moderate risk of up to 40 percent.

At 6am on Saturday much of the UK is covered by some probability of snow, with the south east seeing a 10 percent chance of snow.

The risk of snow coincides with plunging temperatures, with weather charts showing the mercury is expected to dip from Friday morning.

The charts also show Saturday morning is expected to be particularly chilly. 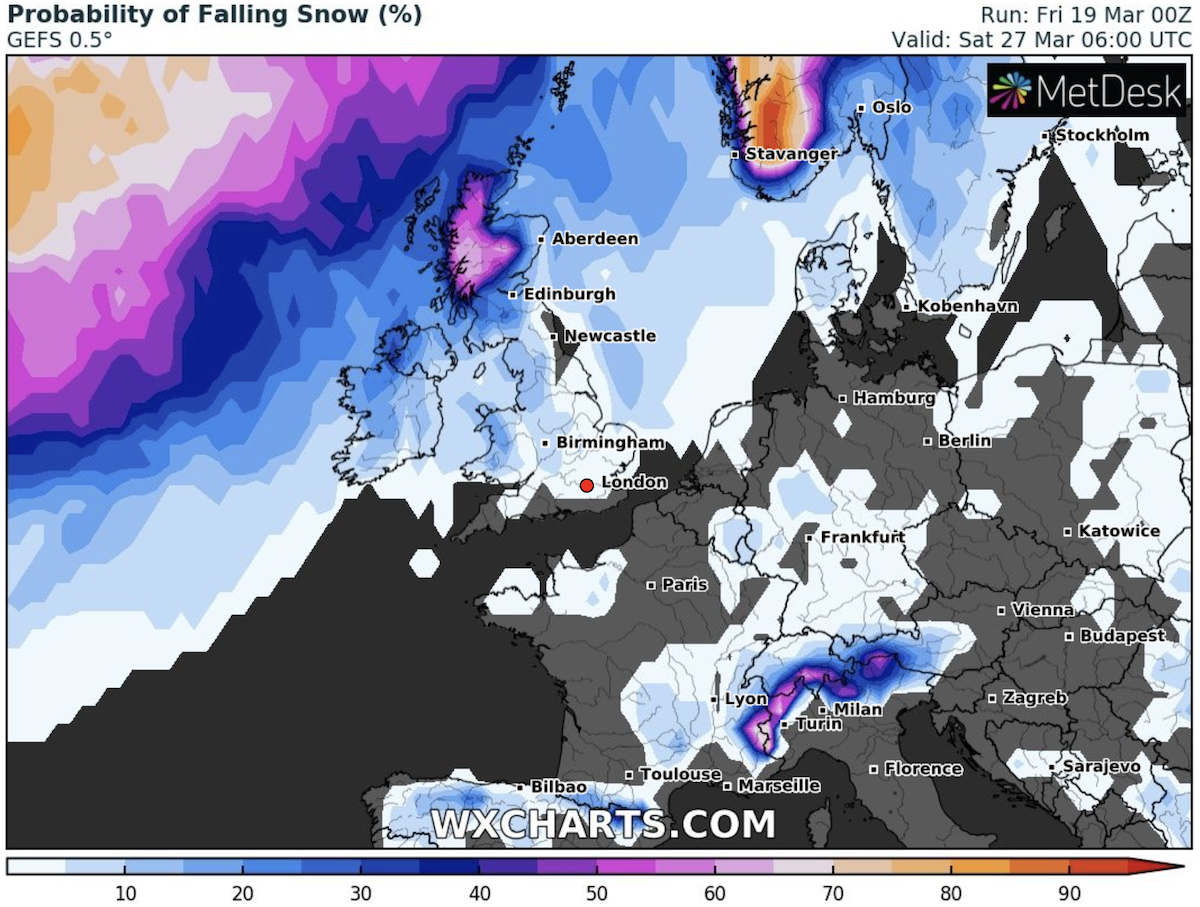 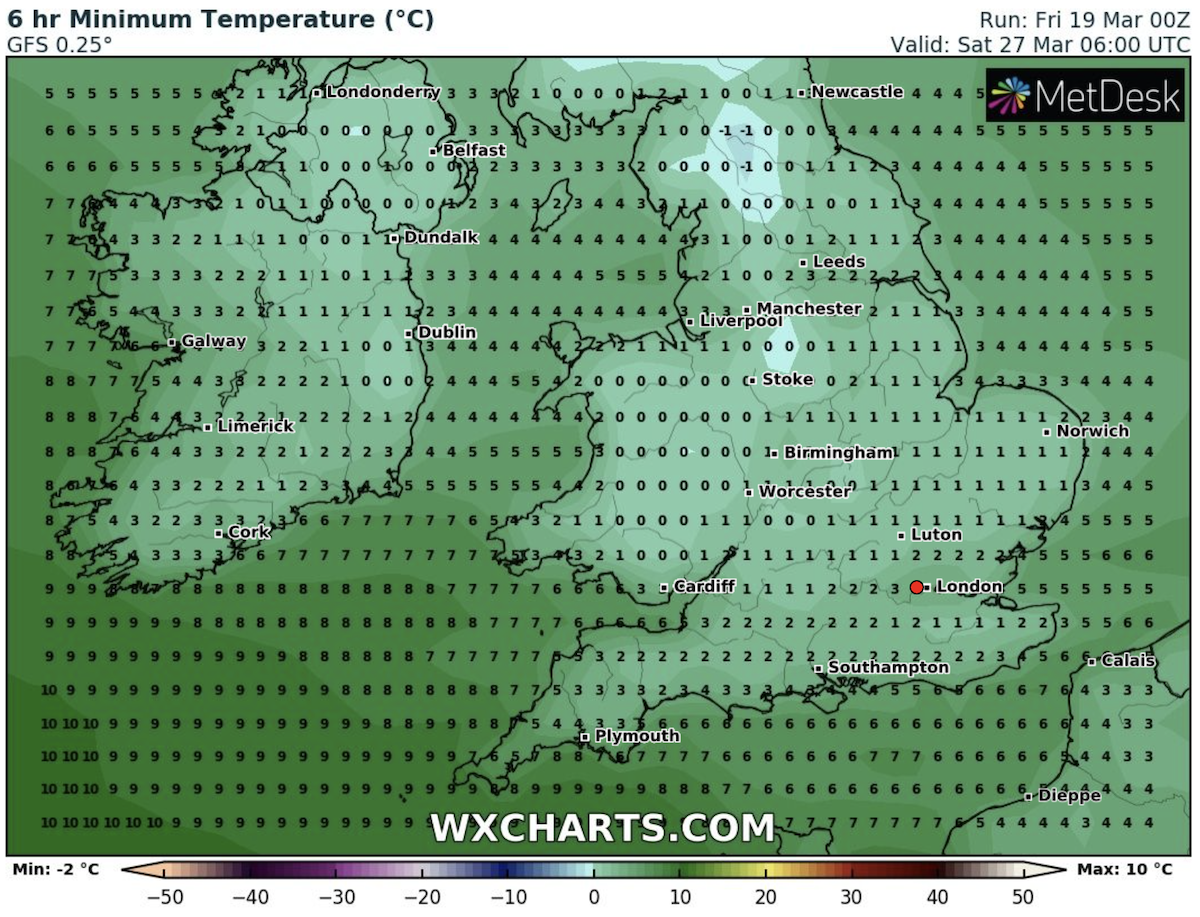 Netweather’s chart shows Scotland can expect lows of -5C at 6am, with northern England battling to rise about freezing.

Temperature maps by WXCharts show England, Wales and Northern Ireland turn an icy white at the same time on Saturday morning, with states of the country set for highs of 1C.

Sunday is expected to be slightly warmer, with the mercury set to reach highs of 8C in the south east.

Met Office forecasters said the UK is set for a change in conditions late next week.

They said: “Unsettled conditions will gradually move in from the northwest through this period. 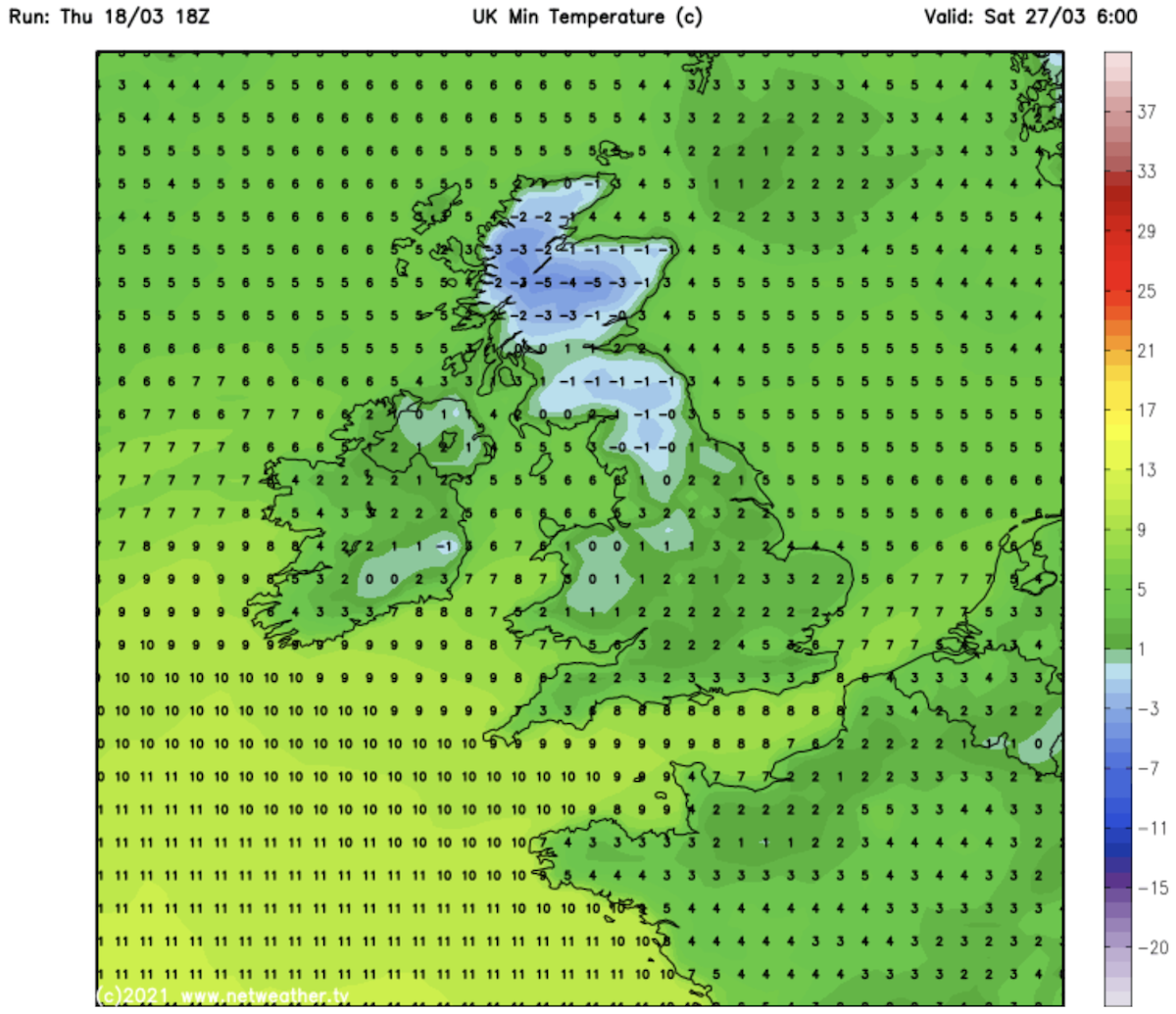 “Temperatures are expected to be near to or milder than average, though short-lived cooler interludes could occur in the showery conditions following weather fronts.”

Netweather forecasters also expect “sleet or snow” in the north and east over the last weekend of March.