Low pressure will sweep over the UK next week as a powerful jet stream over the North Atlantic will blast cold air from Canada and the US. This will cause temperatures to plunge as low as 0C in central Scotland during the last week of this month, according to WXCHARTS’ latest maps. The latest snow depth models also show a layer of snow settling in central and western Scotland at the end of October.

The sprinkling of snow is forecast to deepen to 2-3cm on November 3, as the cold air brings icy conditions.

Met Office forecaster Nicola Maxey warned snow may fall on higher ground in Scotland over the next couple of weeks.

She told Express.co.uk: “If we see any snow at all it will be confined to Scottish hills.

“We are expecting rain or showers for most areas on Wednesday, possible heavy in the South East with a low risk of strong winds. 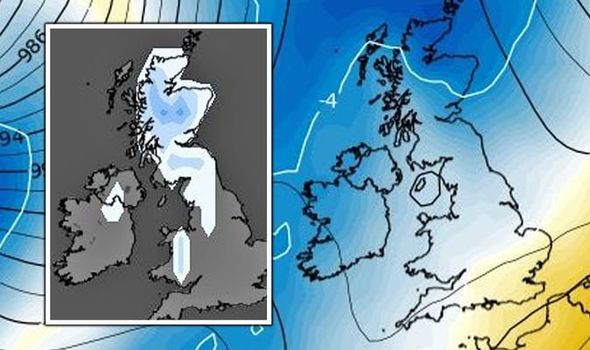 “It will be quieter on Thursday but more changeable from Friday, with spells of wet and windy weather moving in from the west. The best of the weather will be in South East.

“Temperatures for the rest of the month are expected to be around normal for the time of year, although perhaps a little below towards the north west and a little above towards the South East.”

The Met Office warned of wintry weather in its long-range forecast between Tuesday, October 27 and Tuesday, November 10.

The forecast said: “Confidence becomes low towards the end of the month. However, the early part of the forecast period will likely see a gradual transition to a generally more unsettled pattern across the whole of the UK. 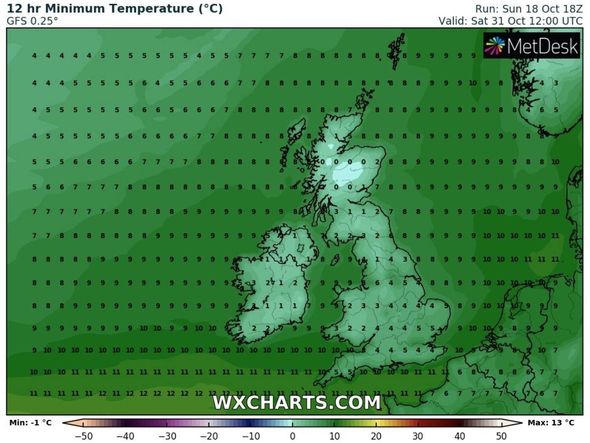 “Spells of rain and showers are likely, with these turning wintry over high ground in the north and northwest.

“There may also be the odd settled spell at times during this period, but they are likely to be short-lived.

“Temperatures likely to stay at or just below average throughout.”

The BBC’s long-range forecast between Monday, October 26 and Sunday, November 8 explained a freezing ‘La Nina’ pattern over the tropical Pacific would form due to the sea surface cooling. 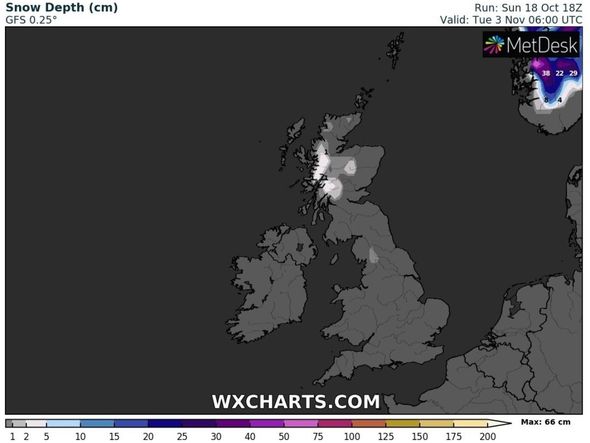 The forecast said: “We can have more confidence than usual that we’ll see some cold northerly plunges in late October and especially in November, due to a ‘La Nina’ pattern over the Tropical Pacific.

“This means colder than normal sea surface temperatures to the west of Peru, out across the Tropical Pacific.

“When La Nina develops in autumn, this favours a higher chance of northerly winds over the UK during November, as high pressure develops to our west more often.”

The BBC’s long-range forecast also predicted low pressure to sweep over from the Atlantic next week.

The forecast said: “Cold plunges of air across Canada and USA appear partly the reason for why the jet stream will be so strong and why low pressure areas could be vigorous as they track towards us over the Atlantic. 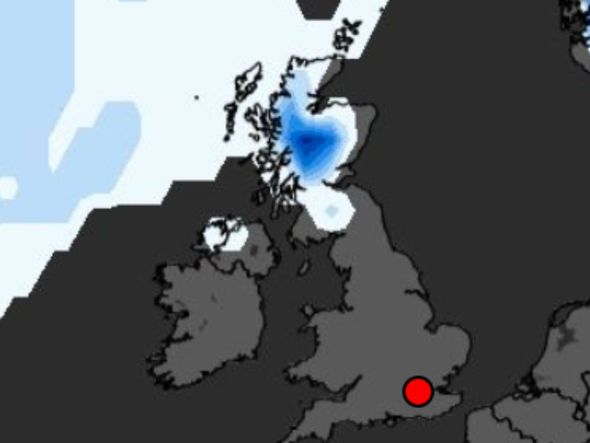 “The cold air over Canada will contrast with the much warmer than average sea surface temperatures off the east coast of Canada and over the north-west Atlantic.

“Strong horizontal contrasts in temperature here give the jet stream above some added strength.

“With low pressure dominating the week, then most of us should prepare for extensive cloud, spells of rain and some strong winds at times.

“But with the fronts and low pressure areas displaced a bit further south, then western Scotland will end up with easterly winds and reduced rainfall, compared with a normal October unsettled spell.”

Related posts:
Hot News
Daughter blasts care home where ‘skin and bone’ step dad died weighing just 8st
Boris Johnson may ‘take coronavirus vaccine on live TV to show Brits it’s safe’
Colorado officials shutdown businesses in defiance of public health orders in Weld County
Singapore: Lab-grown meat to go on sale for first time after landmark approval
Judge throws out Trump rules limiting skilled-workers on H1-B visas
Recent Posts
This website uses cookies to improve your user experience and to provide you with advertisements that are relevant to your interests. By continuing to browse the site you are agreeing to our use of cookies.Ok