The UK was rocked by strong winds last night, with gusts of over 80mph recorded in Wales. The gales are set to continue into the weekend and the latest weather charts show some parts of the country can also expect to see snowfall from 6pm tonight.

The chart, valid for 6pm tonight, shows a 100 percent risk across western Scotland, while northern parts are covered by a more moderate 40-85 percent risk.

Wales and Northern Ireland have up to a 40 percent snow risk.

By 9pm, the risk of snow in northern England increases to 65-85 percent. 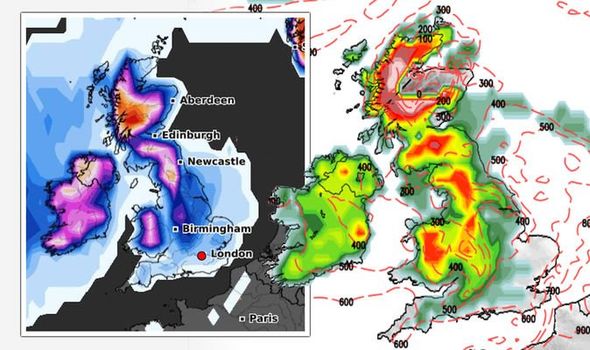 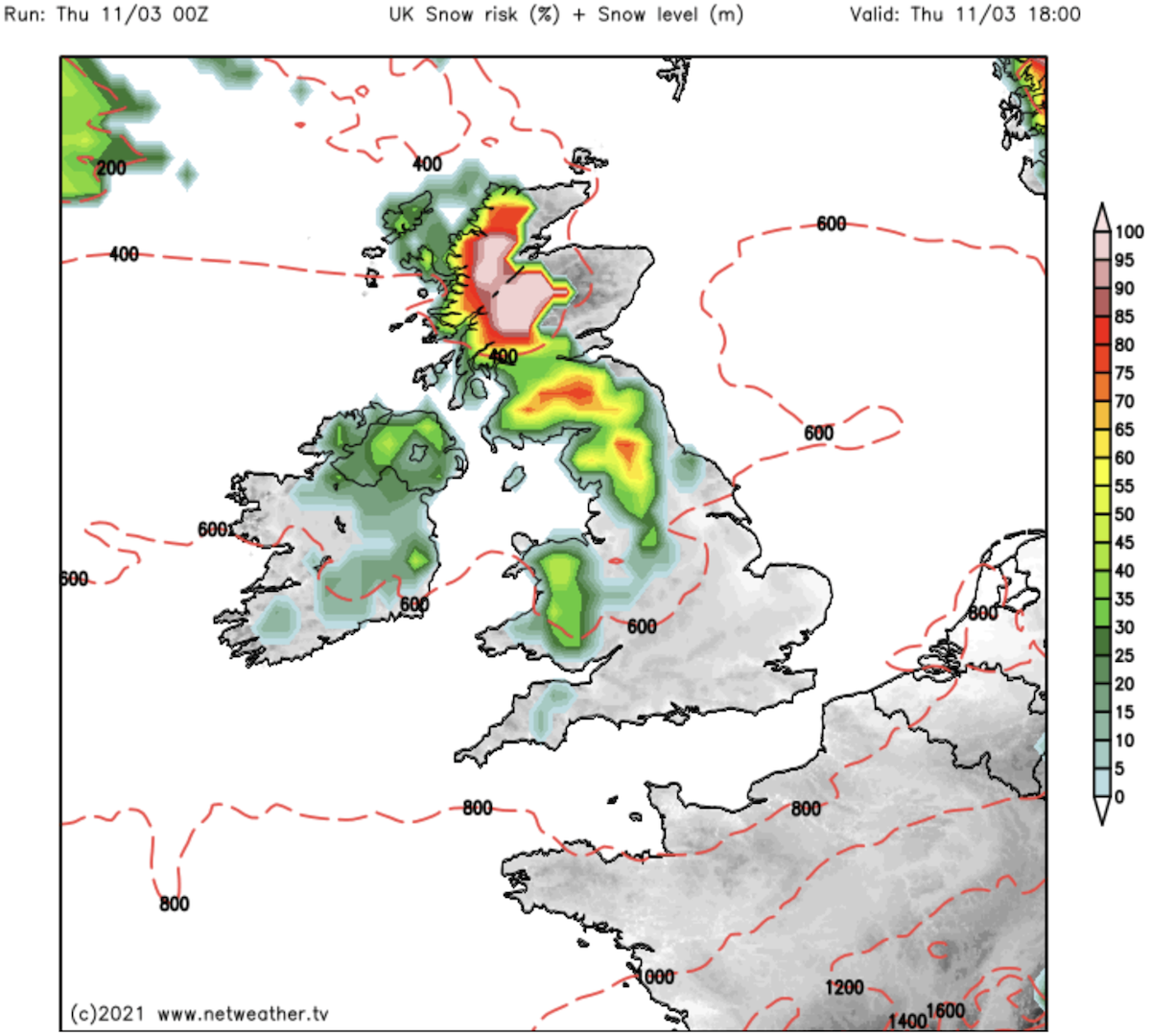 On Friday morning at 9am the snow risk remains very similar, with red patches, indicating a high risk of snow, covering parts of Scotland and northern England.

By 6pm the whole of Scotland is covered by a 100 percent snow risk, while northern England continues to be covered by up to an 85 percent risk.

As the weekend approaches the snow risk covers huge swathes of the UK.

At 6am on Saturday morning much of the country turns red as it is covered by a moderate-to-high snow risk.

JUST IN: BBC Weather: UK to be battered by strongest winds since February 2020 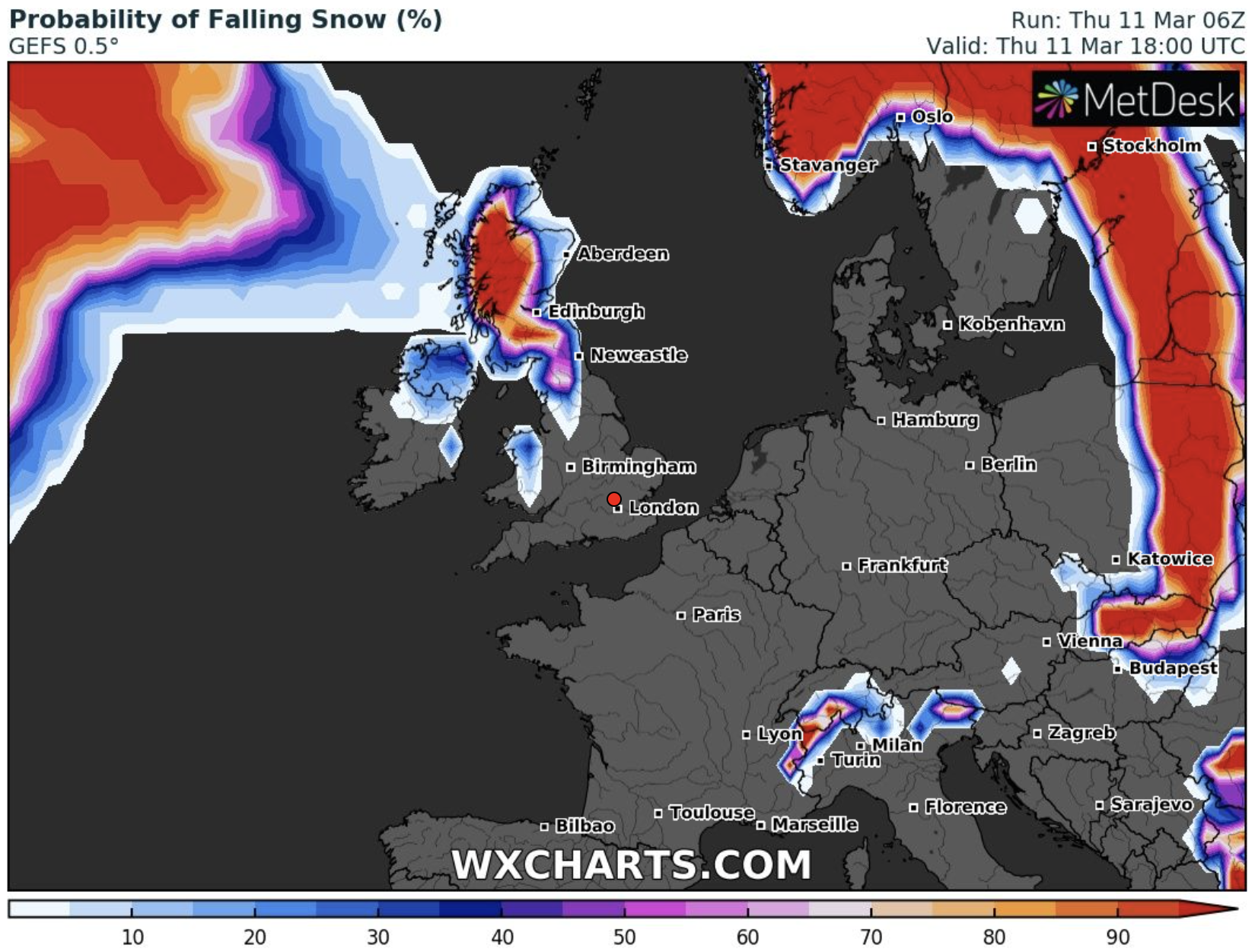 The chart shows Scotland turn dark red and white, indicating a 100 percent risk of snow, while the rest of the country is covered in red, yellow and green colourings – indicating between a 35-85 percent snow risk.

By 9am parts of northern England, the Midlands and Wales turn red as they are covered by a high snow risk.

WXCharts snow probability map also shows the whole of the UK has some probability of snowfall on Saturday morning.

The chart, valid for 6am, shows Scotland, northern England and Wales have the highest snow risk, of up to 90 percent.

The risk of snow remains confined to Scotland by the evening. 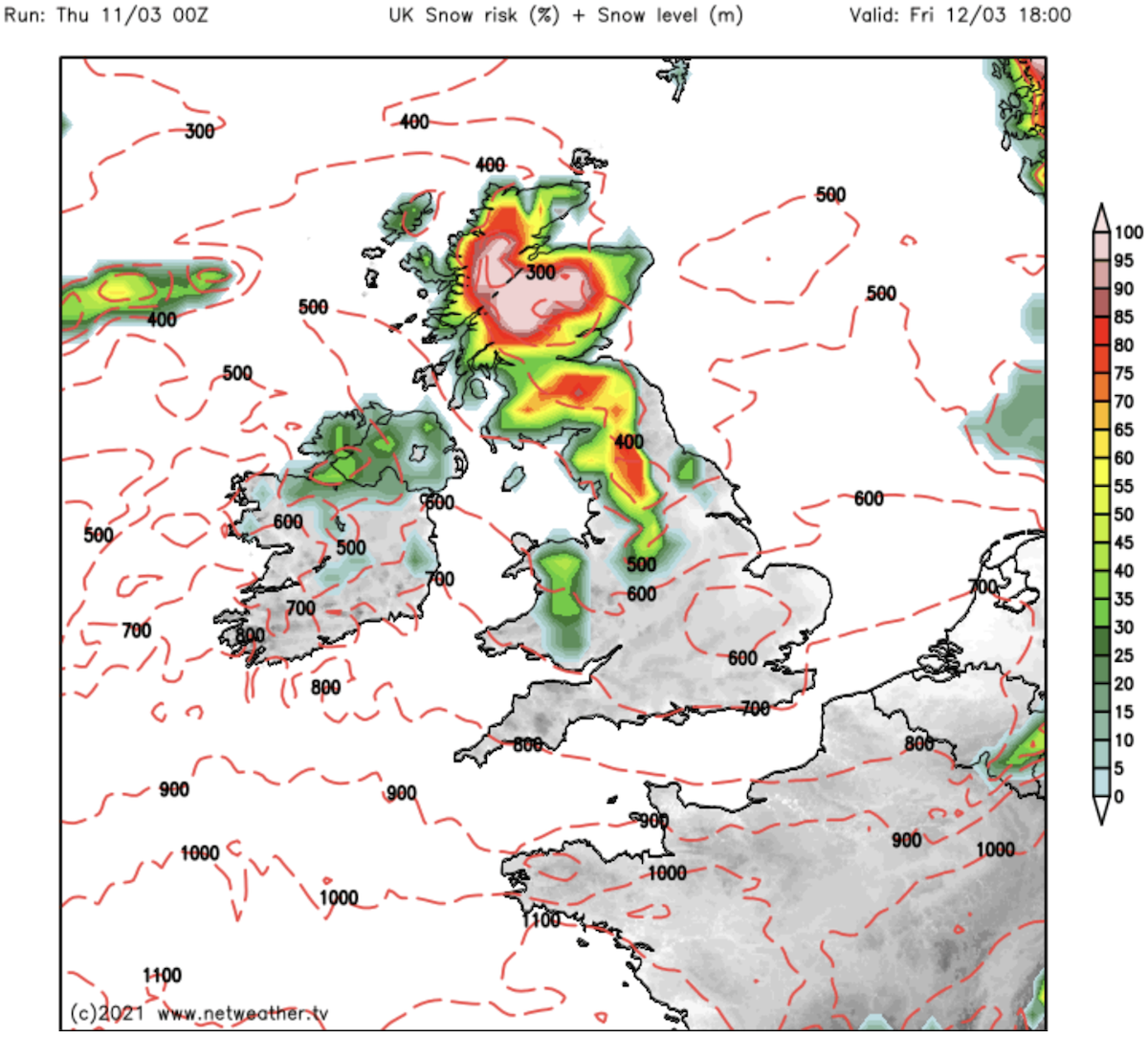 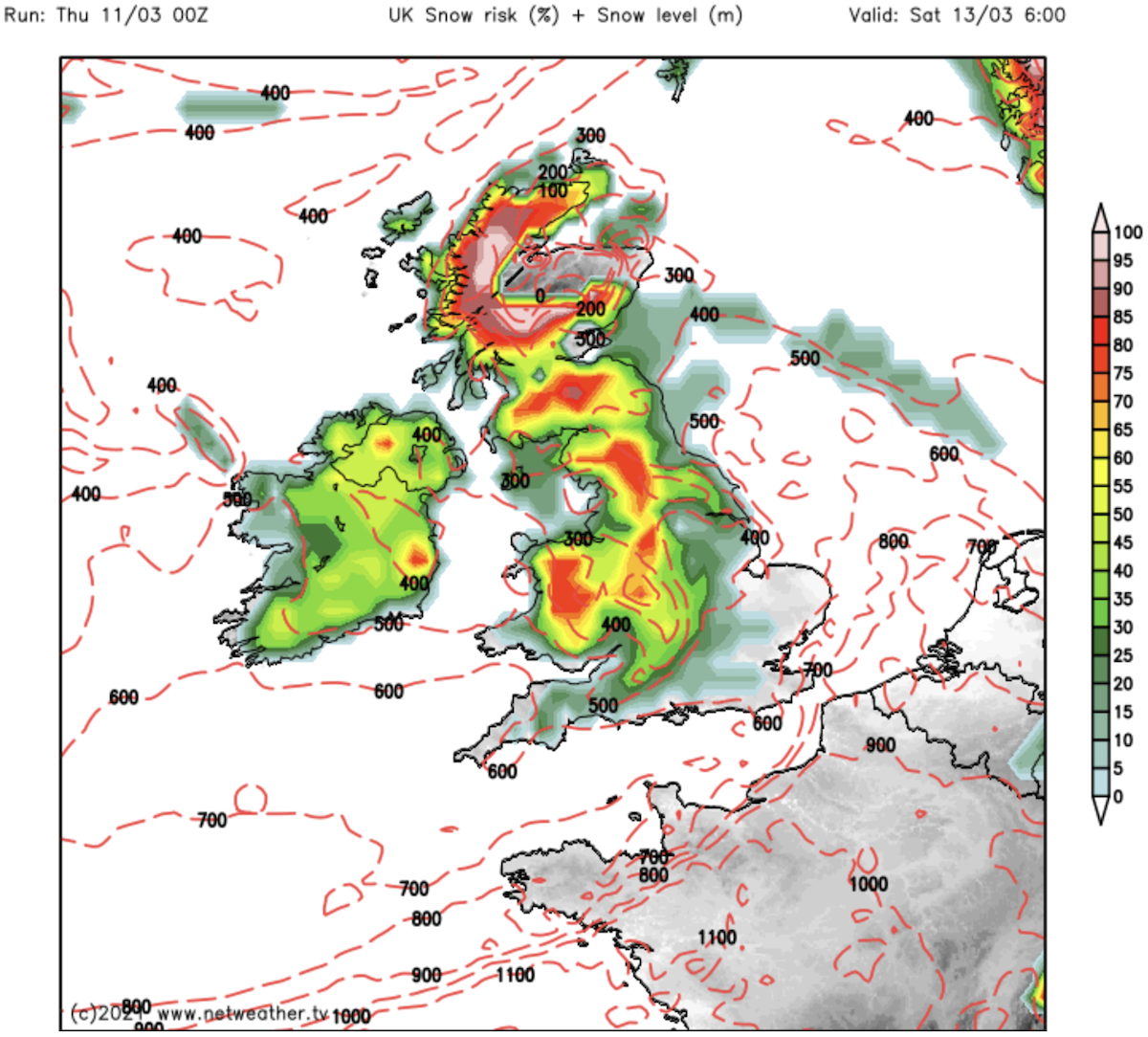 They said: “Remaining windy with clear spells and showers most frequent in the west, heavy at times with hail and risk of thunder.

By Friday, the forecasters said: “A breezy day with sunny spells and scattered showers, wintry over hills in the north, with more prolonged showers arriving into the west towards evening.” 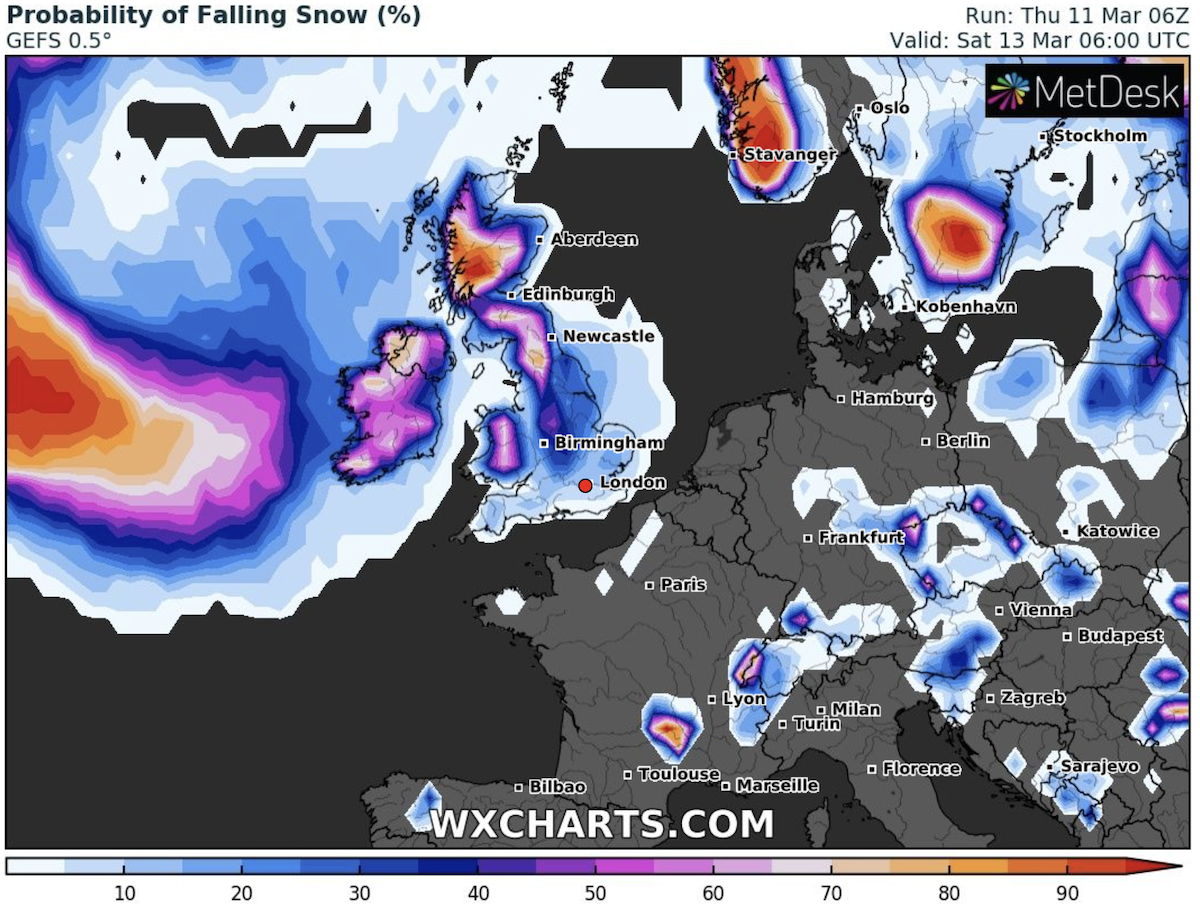 They said: “The ongoing showers over Northern Ireland and Scotland turn wintry with snow over the hills and sleet or hail to lower levels by dawn.”

They added: “A grim short spell of wet and windy weather for Greater London, Essex, Kent and East Sussex tomorrow.

“For Wales, northern England, Northern Ireland and Scotland there will be bands and clusters of heavy showers with a mix of rain, sleet or hail and snow over the hills. It will feel cold.”