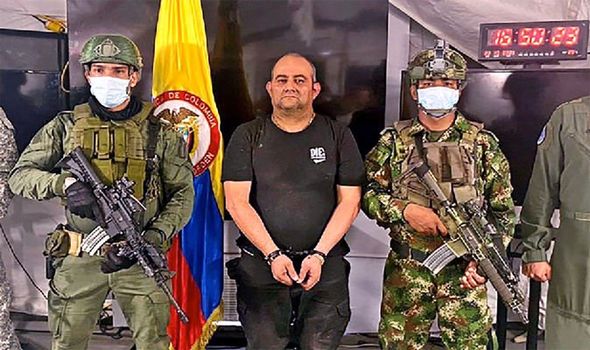 British and US specialists located drug lord Dairo Antonio Usuga, known as Otoniel, prior to a military operation involving 500 soldiers and 22 helicopters that led to his arrest.

Satellite technology found Otoniel hiding in a jungle in Necocli, near Colombia’s border with Panama.

Otoniel was the head of the notorious Clan del Golfo, or Gulf Clan, a drug cartel that controls many routes used to smuggle drugs from Colombia. Otoniel, 50, is accused of sending dozens of shipments of cocaine to the US, killing police officers, illegal mining, recruiting minors and sexually abusing children.

Colombia’s President Ivan Duque Marquez called the operation, in which one police officer died, “the hardest strike to drug trafficking in our country this century”.

Police chief Jorge Vargas proudly spoke during a press conference of how Colombian authorities carried out “an important satellite operation with agencies of the US and the UK”.

Otoniel used a network of rural safe houses to move around and evade the authorities, while using couriers for communication rather than a phone.

He had become the head of the Gulf Clan, formerly the Usuga Clan, almost 10 years ago after its last leader, his brother, was killed in a raid.

Dozens of Otoniel’s lieutenants were captured and killed in an operation in 2016, and his sister, Nini Johana Usuga, was arrested in March.

She was extradited to the US to face charges connected to drug trafficking and money laundering.

Much of the cocaine arriving in the UK is from Colombia – and Europe has eclipsed the US as the Gulf Clan’s favoured market.