Forecasters warn more severe cold snaps are on the way later this month, as cold air outbreaks move in from Scandinavia. The weather front looks set to spark unsettled conditions, including plummeting temperatures and heavy snow across the whole country, according to the latest weather charts.

The wintry conditions are expected to hit the UK by Tuesday January 19, with a weather chart by Netweather showing snow is forecast for much of Britain.

The map, valid for 6pm, shows much of Scotland and the north of England covered in patches of white and red, indicating between an 80-100 percent risk of snow.

Parts of Wales, Northern Ireland and the Midlands are also covered by the bright colours.

The east of England has a moderate snow risk, as indicated by the yellow and green colourings. 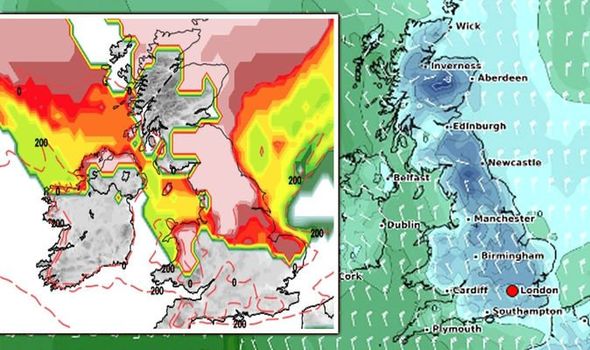 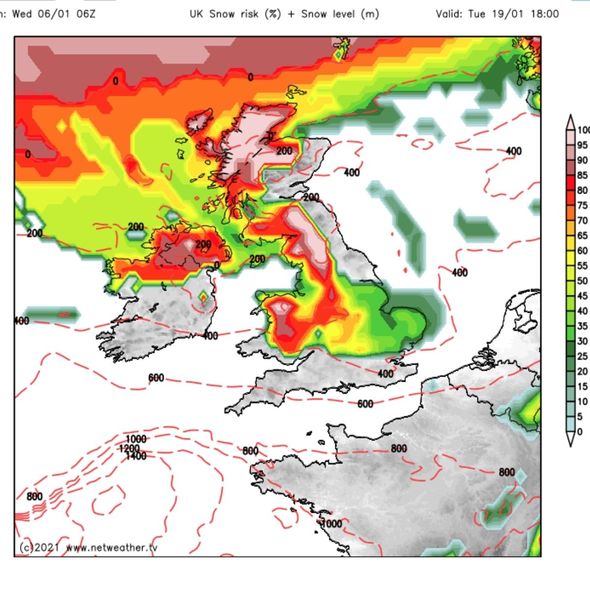 By 6am the next morning the snow risk has increased significantly, with almost the entirety of Scotland, northern England and Wales showing a 100 percent risk of snow.

The Midlands and east of England also have a high chance of snow, as shown by the dark red areas.

As Thursday morning approaches, the snow risk moves southwest with the West country and the south of England expected to be blanketed in snow at 6am.

By 6pm the weather front moves further east, as the snow risk chart shows the whole of the south of England, including the capital, turn white indicating a 100 percent chance of snowfall. 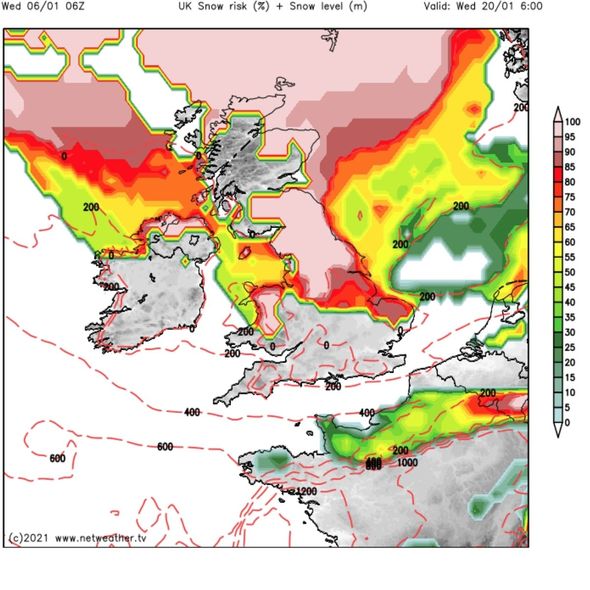 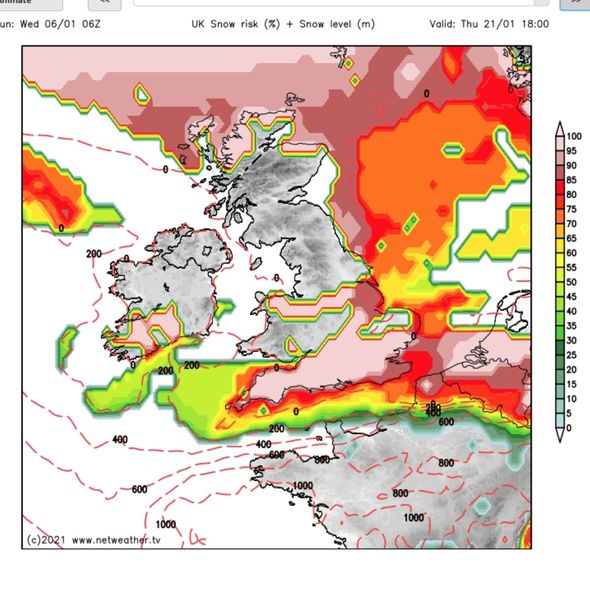 Weather charts also show Friday, January 22 is set to bear the brunt of the wintry conditions.

Snow depth charts by WXCharts show parts of Scotland can expect 7.5inches (19cm) of snow by 6am, while the north of England is forecast to see up to 4.3inches (11cm).

Wales is expected to receive up to 3.5inches (9cm), with the south of England forecast to receive similar amounts of snow, according to the chart.

Alongside the snowfall, temperatures are also forecast to plummet well below freezing. 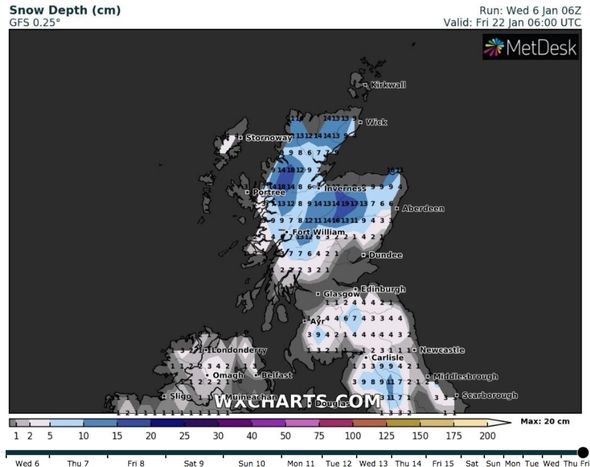 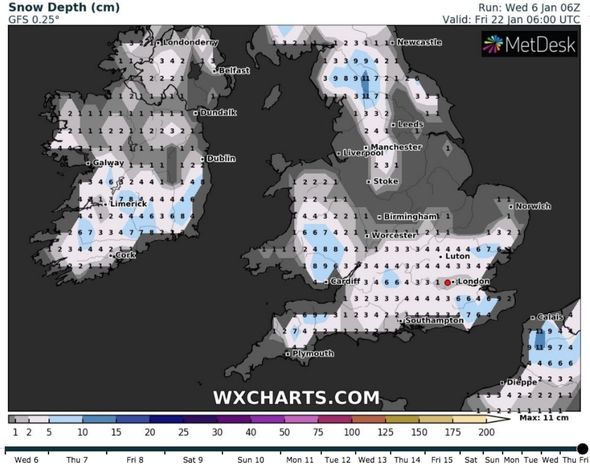 A second weather map focusing on the minimum temperature by WXCharts forecasts the mercury could fall to as low as -12C in parts of Scotland at 6am on Friday January 22.

The Met Office has said the period between Wednesday, January 20 and Wednesday, February 3 is set to be characterised by unsettled conditions, as the north sees cold air outbreaks move in from Scandinavia while the south is expected to have milder conditions.

They said: “This boundary between the cold and milder conditions could also allow for some significant snowfall where the two air masses meet.” 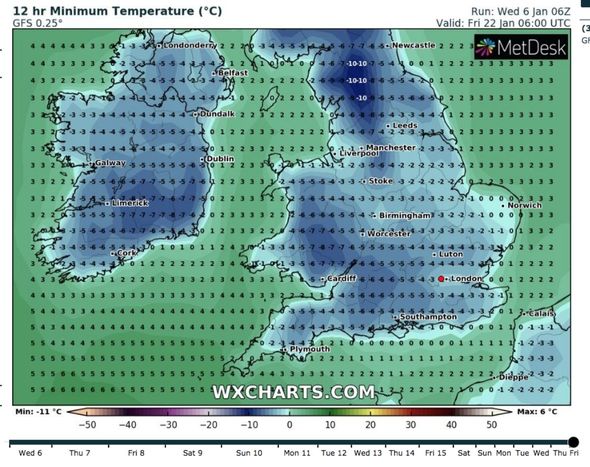 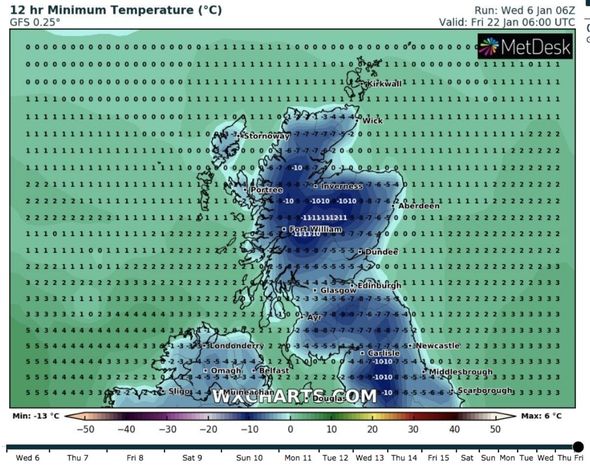 BBC forecasters also expect the end of January to be hit by unsettled, wintry conditions.

They said: “Heading later into January there is a growing risk of some of these cold snaps become more widespread and longed-lived.

“They are still expected to be the exception rather than the norm like we saw over the holiday break, but by late-January there is potential for some sharp cold snaps between fronts.”

Brian Gaze at the Weather Outlook also expects colder conditions to return at the end of the month.