The UK is experiencing a scorching heatwave with highs of 37C possible in the south east over the next few days. But the hot weather is expected to be interspersed with thunder and lightning, as the Met Office has issued yellow thunderstorm warnings from Monday until Thursday. On some days the entirety of the UK is under a warning.

Along with scorching heat above 30C today (Monday, August 10), much of the UK is expected to see thunderstorms today and over the coming days.

Over the next four days, the Met Office has issued widespread thunderstorm warnings.

The Met Office has warned thunderstorms could be possible anywhere, and they could be quite severe.

According to LightningMaps.org, on Monday morning most of the UK’s lightning was appearing in south-west England and Wales. 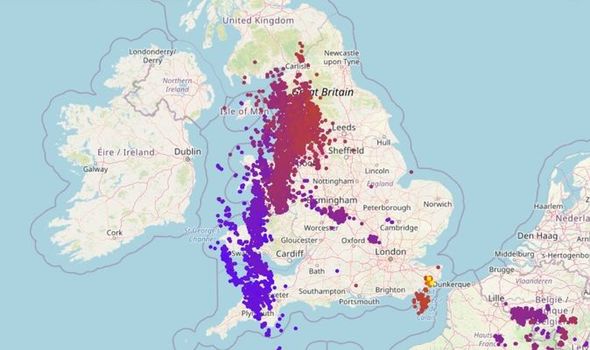 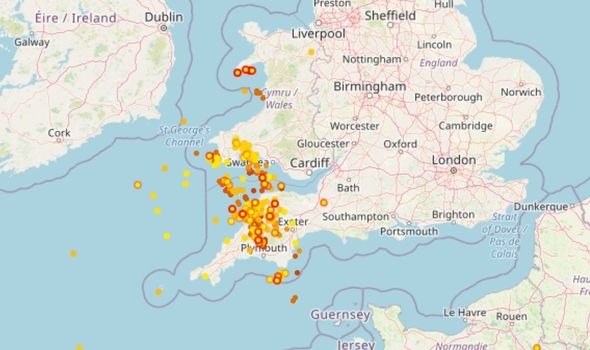 Over the last 24 hours, maps show lightning has been widespread across Europe as well.

On Monday Met Office forecaster Craig Snell told Express.co.uk it is difficult to plot exactly when the thunderstorms will occur and where.

Mr Snell said: “We’ve got some thunderstorms already developing across the south-west and these will transfer their way across Wales and into northwestern England, Northern Ireland and eventually into Scotland later this afternoon.

“We could potentially see some torrential rain, large hail and frequent lightning during these thunderstorms, so you certainly will know about them when they do come across you. 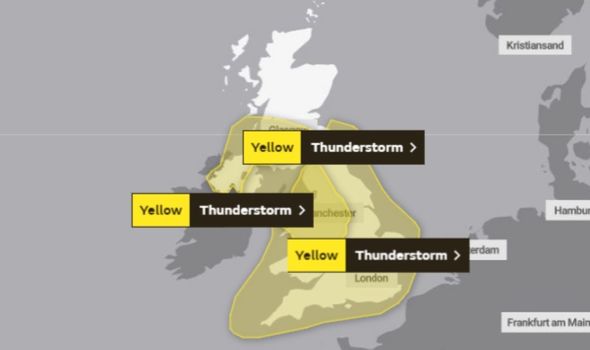 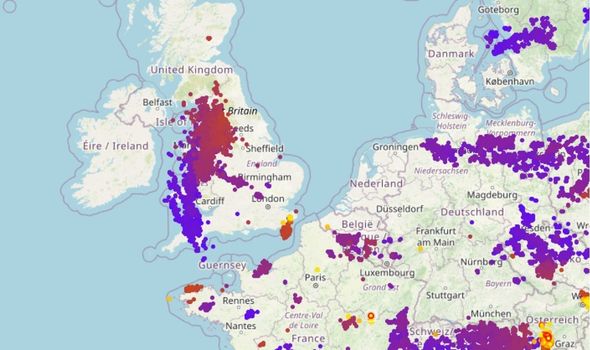 “Further east there will be a few thunderstorms around.”

On Monday a warning across England, Wales and part of Northern Ireland is in place until midnight.

The rest of Northern Ireland and parts of Scotland are under another yellow warning from 3pm until midnight.

Much of the West Midlands and Wales has also been put under a separate thunderstorm warning from 4pm until 3am on Tuesday morning.

DON’T MISS:
Up to 6INCHES of rain to fall in 4 hours as thunderstorms hit [FORECAST]
UK storm track: Thunderstorms to strike today- will your area be hit? [WARNING]
BBC Weather: Carol Kirkwood warns of imminent thunderstorms to hit UK [VIDEO]

On Tuesday and Wednesday, the Met Office has issued a yellow thunderstorm warning for the entirety of the UK.

Thursday sees most of England and Wales under a thunderstorm warning as well.

The Met Office is warning of heavy rainfall, with up to three inches (80mm) of rain potentially falling in a three hour period on Tuesday.

There is a small chance six inches (150mm) could fall in the West Midlands and Wales on Monday in three to four hours. 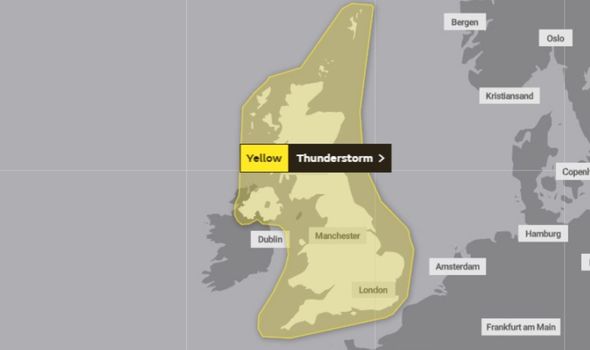 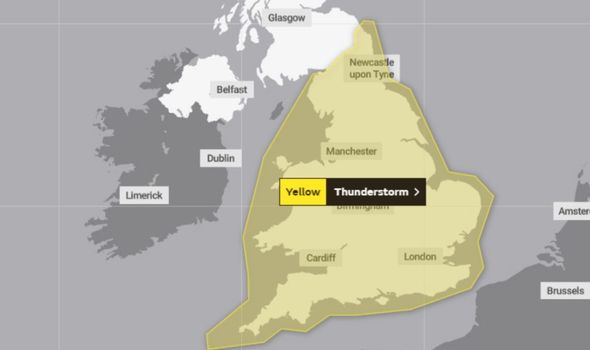 Tuesday’s weather warning for the whole of the UK reads: “Areas of thunderstorms are increasingly likely to develop over the south of the UK or nearby continent late in the weekend or early next week, and will generally track north or north-westwards, potentially affecting all parts of the UK at some points during this period.

“Whilst the most intense thunderstorms, in some instances associated with large hail, will most probably be those triggered by the high temperatures of the day over England and Wales, other areas of storms producing heavy rainfall and frequent lightning could reach further north at times over Scotland and Northern Ireland.

“These could occur at any time of the day.

“Of the area highlighted, at present the west of Northern Ireland and west of Scotland seem less likely to be affected than other areas, but still could not be ruled out.

“Where the storms occur, rainfall totals of 30 to 40mm could fall in an hour, with some locations potentially receiving 60 to 80mm in three hours, although these will be fairly isolated.”