Flood-hit regions of Britain are facing more problems as weather forecasters issue warnings for more heavy rain following two weekends of persistent rainfall. Several weather warnings for snow, wind and rain have been issued for this week. Express.co.uk has compiled a guide to all the latest flood alerts and warnings in effect across the country.

The flood-hit regions of the UK are facing more significant flooding as heavy rain warnings have been issued by the Met Office.

The Met Office has put three weather warnings into force for Monday.

The first is for rain and snow across Northern Ireland and is in effect from midnight to 12pm on Monday.

The weather forecaster advises that there will likely be sleet and snow which could cause some travel disruption for a time. 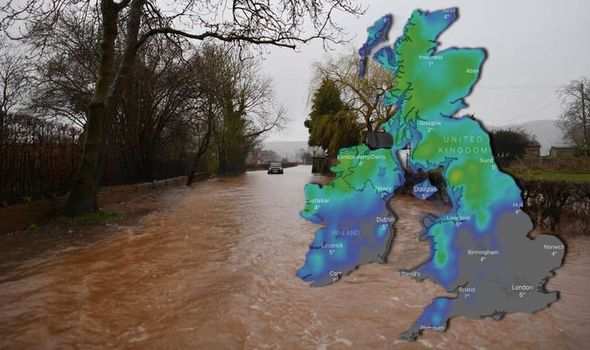 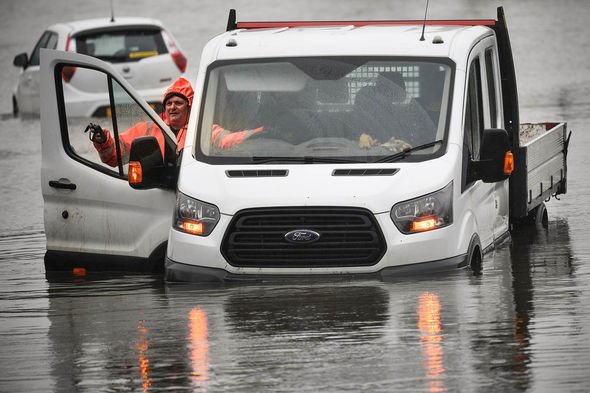 The Met Office’s second weather warning is for rain and snow and is in effect across northern parts of England.

The forecast reads: “A band of rain reaching southern parts of northern England during Sunday night quickly turns to snow before spreading northeastwards across the rest of the warning area.

“Across northern England, snow will then turn to rain from the south and west through the course of the morning before slowly turning to rain at lower levels over the part of the warning area in Scotland.

“The bulk of accumulations will be above 200 metres where two to five cm is likely in many areas whilst above 300 to 400 metres five to 10cm is expected.

“At lower levels, accumulations will be smaller, patchier and shorter-lived and it may be that little if any, snowfalls in some eastern coastal areas.

“A brief spell of freezing rain is possible as snow begins to turn to rain, leading to icy stretches.

“Meanwhile, given saturated ground and recent flooding, the combination of snow melt and rain may also bring about some disruption, mainly over parts of northern England.”

The warning is in effect from 2am to 3pm on Monday and warns of snow and flooding leading to some travel disruption. 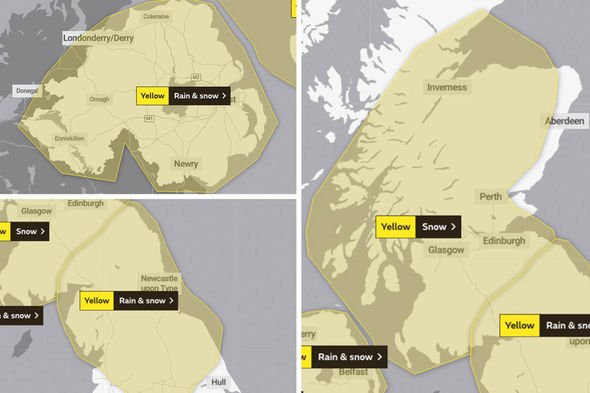 The Met Office has also issued a yellow weather warning for snow across most parts of Scotland.

The weather forecaster advises that snow may bring some disruption to the affected regions, particularly on higher ground.

The warning is in effect from 3am to 10pm on Monday with snow buildup up to eight inches (20cm) hitting high ground in Scotland.

He said: “I’m afraid we hold onto unsettled weather conditions across the UK over the next few days.

“We will see spells of wet and windy weather at times and there’ll be some snow in the north at times too.

“Monday looks unsettled across all areas. We’ll see wet and windy weather sweeping from the southwest – gales or severe gale-force winds in place, and some snow towards the north of the UK.” 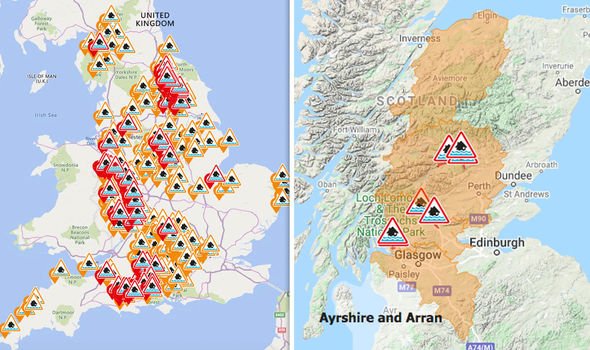 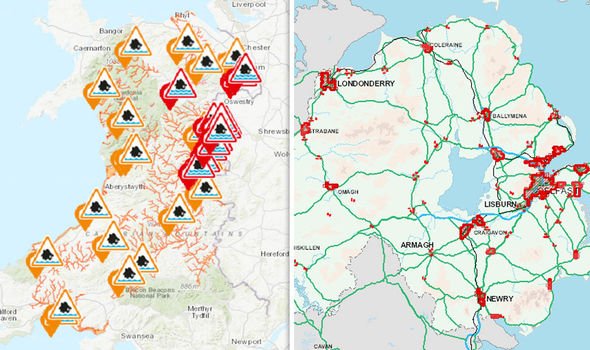 A series of flood warnings are currently in effect across the country.

The Environment Agency has issued one severe flood warning, 88 flood warnings and 182 flood alerts across England.

In Wales, Natural Resources Wales has 13 flood warnings and 19 flood alerts in force across the country.

Over the next five days, the Environment Agency has said that heavy rain could cause flooding across parts of northern England and Wales.

The Environment Agency’s five-day flood risk reads: “Local flooding from rivers is probable across parts of the north of England on Saturday and Sunday due to heavy rain.

“Local flooding from rivers will also continue along slower responding rivers such as the Severn and parts of the Trent.

“Local flooding from surface water is also probable across parts of the south of Wales today (Saturday) and into Sunday.

“Flooding impacts may continue along slow responding river catchments such as the Severn, Wye, Trent and parts of Yorkshire until Wednesday.

“Groundwater flooding is expected to be ongoing over parts of the south of England for at least the next five days.

“Land, roads and some properties will flood and there will be travel disruption.”