The number of children admitted to the hospital in the United States with Covid-19 has risen to the highest levels reported to date. Nearly 30,000 of them entered hospitals in August.

Children remain markedly less likely than adults to be hospitalized or die from Covid-19. But the United States recorded more than 250,000 child virus cases in the past week, the highest number to date, according to the most recent American Academy of Pediatrics survey of state data.

“It should concern us all that hospitalizations — indicators of severe illness — are rising in the pediatric population, when there are a lot of steps we could take to prevent many of these hospitalizations,” said Jason L. Salemi, an epidemiologist at the University of South Florida, who tracks Covid-19 hospitalization data.

According to Dr. Christopher Carroll, a pediatric intensivist at Connecticut Children’s Medical Center, the average U.S. pediatric I.C.U. in the U.S. has 12 beds. “In a system that small, even a few patients can quickly overrun the capacity, ” he said. “And there are fewer specialty trained pediatric clinicians to pick up the slack.” 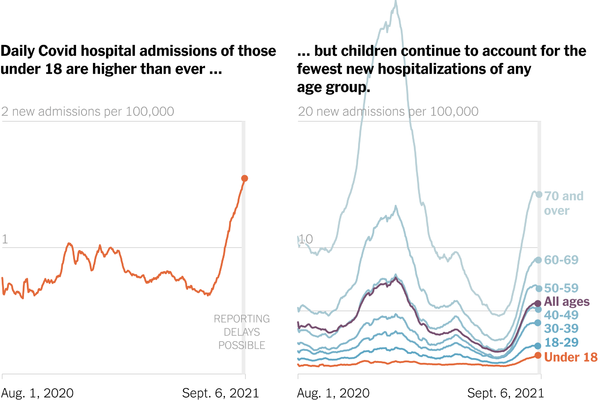 Though serious illness in young people remains uncommon, more children are now being hospitalized for Covid-19 than ever before — especially in states where fewer residents have been vaccinated.