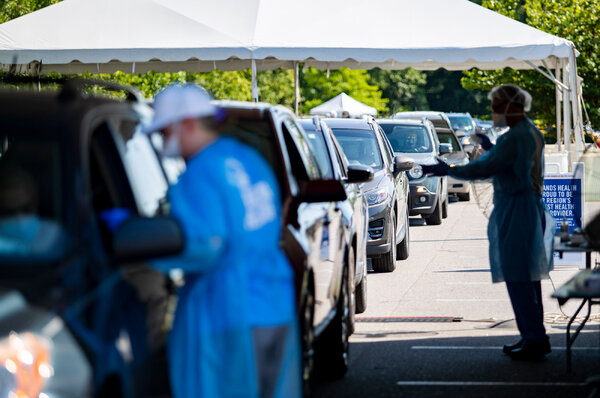 The director of the Centers for Disease Control and Prevention issued a grave warning on Friday that a recent sharp drop in coronavirus cases across the United States “may be stalling” and “leveling off at a very high number” — a worrisome development that comes as more cases of concerning new variants have been found, and could suggest that a return to normalcy is not yet quite as near as many Americans had hoped.

Even as the vaccination campaign continues, the director, Dr. Rochelle Walensky, also warned governors not to roll back mask mandates or other efforts to contain the virus: “Things are tenuous. Now is not the time to relax restrictions.”

According to a New York Times database, virus cases across the United States appear to be leveling off from the steep decline that began in January, with figures comparable to those reported in late October. Cases have slightly increased week over week in recent days, though severe weather limited testing and reporting in Texas and other states the previous week, and not all states reported complete data on the Presidents Day holiday. The seven-day average of new cases was 77,800 as of Thursday.

While deaths tend to fluctuate more than cases and hospital admissions, Dr. Walensky told reporters during a White House briefing on the pandemic, the most recent seven-day average is slightly higher than the average earlier in the week. The seven-day average of newly reported deaths was 2,165, as of Thursday.

“We at C.D.C. consider this a very concerning shift in the trajectory,” she said, adding, “I want to be clear: cases, hospital admissions and deaths — all remain very high and the recent shift in the pandemic must be taken extremely seriously.”

Dr. Walensky said some of the rise may be attributable to new variants of the coronavirus that spread more efficiently and quickly. The so-called B.1.1.7 variant, which first emerged in Britain, now accounts for approximately 10 percent of all cases in the United States, up from one to four percent a few weeks ago, she said. The U.S. ability to track variants is much less robust than Britain’s.