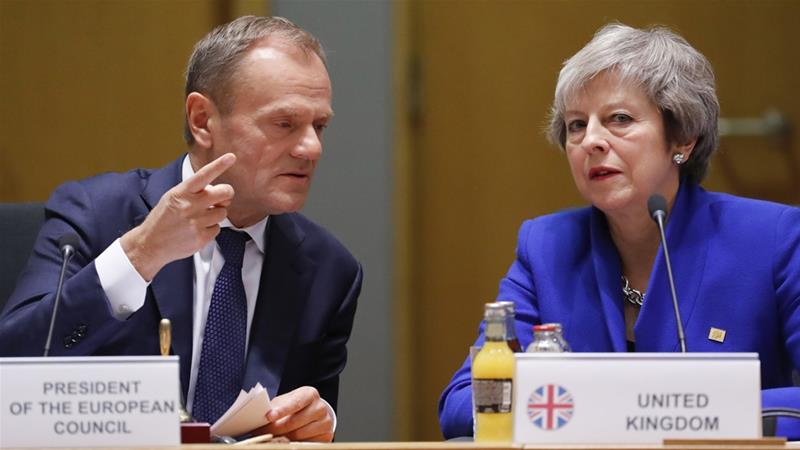 European Council President Donald Tusk has said he had been “wondering what that special place in hell looks like for those who promoted Brexit without even a sketch of a plan how to carry it out safely”.

The remark came as Tusk spoke to journalists on Wednesday after meeting Irish Prime Minister Leo Varadkar in Brussels, where the European Union is headquartered.

In advance of a meeting between British Prime Minister Theresa May and European Commission President Jean-Claude Juncker on Thursday, Tusk reiterated that the EU had no intention of renegotiating the backstop.

“The EU is first and foremost a peace project. We will not gamble with peace or put a sell-by date on reconciliation,” Tusk said.

“This is why we insist on the backstop. Give us a believable guarantee for peace in Northern Ireland and the UK will leave the EU as a trusted friend,” he added.

In a vote at the House of Commons last week, MPs asked May to go back to Brussels and renegotiate the safety net to maintain an open border in the island of Ireland, known as the backstop.

It is part of the withdrawal agreement the prime minister had negotiated with the EU, and is seen as the main reason Parliament voted it down on January 15.

Reactions to Tusk’s “place in hell” comments, which he also tweeted, were not long to follow.

Former UKIP leader Nigel Farage, now an independent MEP and considered one of the architects of Brexit, tweeted back: “After Brexit we will be free of unelected, arrogant bullies like you and run our own country. Sounds more like heaven to me.”

Andrea Leadsom, leader of the House of Commons, said in an interview that Tusk should apologise for his “completely unacceptable” and “spiteful” comments.

Theresa May’s spokesman said such language was unhelpful seeing as Brexit is the result of a referendum that he called “the largest democratic exercise in our history”.

Sammy Wilson, the Democratic Unionist Party’s (DUP) Brexit spokesman, said, “It is Tusk and his arrogant EU negotiators who have fanned the flames of fear in an attempt to try and overturn the result of the referendum.”

The DUP, an ally of May, is in favour of renegotiating the backstop.

But Mary Lou McDonald, president of another party active in Northern Ireland, Sinn Fein, seconded Tusk, saying it is the Brexit promoters’ language that is intemperate.

Tusk also targeted Labour leader Jeremy Corbyn. “I know that still a very great number of people in the UK, and on the continent, as well as in Ireland, wish for a reversal of this decision,” he said.

“But the facts are unmistakable. At the moment, the pro-Brexit stance of the UK prime minister, and the leader of the opposition, rules out this question.”