Seoul reportedly offered to pay about a $1bn to host American troops but US president previously demanded $5bn. 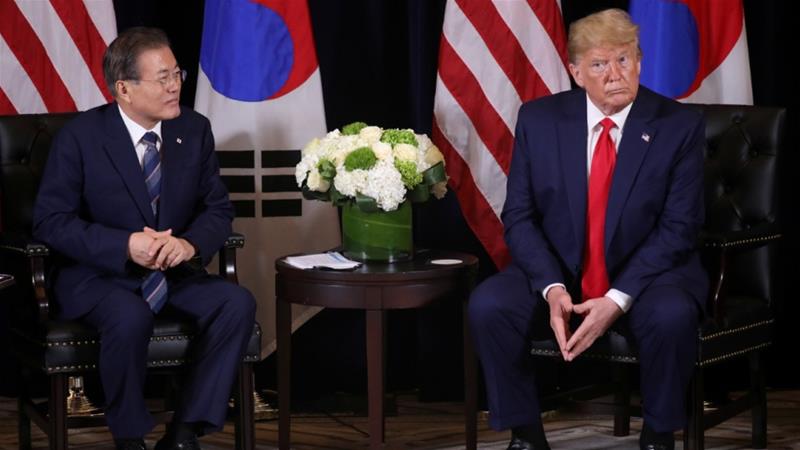 US President Donald Trump has rejected a sum offered by South Korea in response to his demand that the country’s government contribute more to the cost of US military forces deployed there.

“Now they’ve offered us a certain amount of money and I’ve rejected it,” Trump said at a White House news conference on Monday, adding that Seoul was paying about a billion dollars a year towards the cost of stationing between 28,000 and 32,000 US troops there.

“We’re defending a wonderful nation. We’re asking them to pay for a big percentage of what we’re doing. It’s not fair. … It’s a question of will they contribute toward the defence of their own nation,” Trump added.

US officials told Reuters news agency earlier this month that Trump had rejected a South Korean offer made in the run-up to last week’s parliamentary election of an increase of at least 13 percent from the previous cost-sharing accord.

“We’re doing a tremendous service. We have a wonderful feeling and a wonderful relationship with each other, but we have to be treated equitably and fairly,” Trump said.

When asked about reports that he was negotiating a reduction of US troop numbers with South Korean President Moon Jae-in, Trump appeared to reject this, replying:

Trump said: “We’ll find out fairly soon” about how the negotiation was going.

The White House said at the weekend that Trump spoke to Moon on Saturday and expressed appreciation for South Korea‘s help in procuring COVID-19 tests for the United States. It said they also discussed ways to strengthen the security relationship.

Late last year, talks between the US and South Korea over the cost of hosting American troops collapsed after the two parties failed to agree on the amount that Seoul should pay.

South Korean legislators said US officials had demanded up to $5bn a year, about five times the 1.04 trillion won ($896m) Seoul agreed to pay in 2019 for hosting the 28,500 American troops.

US officials have not publicly confirmed the number, but Trump has previously said the US military presence in and around South Korea was “$5bn worth of protection”.

Under South Korean law, the military cost-sharing deal must be approved by parliament.

Governing party legislators have said this week they will “refuse to ratify any excessive outcome of the current negotiations” that deviate from the established principle and structure of the agreements for about 30 years.

Related posts:
Hot News
Gloating Varadkar praises Barnier as ‘honorary Irishman’ for fighting against UK in Brexit
Colorado new auto registrations struggle to gain traction
Airport uses cute sniffer dogs to detect coronavirus with ‘almost 100% accuracy’
4 wounded in Paris knife attack near former Charlie Hebdo offices
Opinion | A Supreme Court Fight Might Be Exactly What America Needs
Recent Posts
This website uses cookies to improve your user experience and to provide you with advertisements that are relevant to your interests. By continuing to browse the site you are agreeing to our use of cookies.Ok