WASHINGTON — The Trump administration gutted protections for migratory birds on Tuesday, delivering a parting gift to the oil and gas industry, which has long sought to be shielded from liability for killing birds unintentionally in oil spills, toxic waste ponds and other environmental disasters.

The final rule comes less than a month before President-elect Joseph R. Biden Jr. takes office. While Mr. Biden has not explicitly pledged to repeal the measure, his choice for interior secretary, Representative Deb Haaland of New Mexico, is widely expected to do so.

Repealing the measure won’t be a simple or quick process, however. Conservationists and oil industry executives alike said that was what the Trump administration intended when issuing the new regulation over the objections of many scientists, who have asserted in public comments on the regulation that it would lead to many more bird deaths.

“This rule simply reaffirms the original meaning and intent of the Migratory Bird Treaty Act by making it clear that the U.S. Fish and Wildlife Service will not prosecute landowners, industry and other individuals for accidentally killing a migratory bird,” David Bernhardt, the Interior secretary, said in a statement.

Under the measure, which changes the way the 1918 Migratory Bird Treaty Act is implemented, the federal government will no longer fine or prosecute companies whose actions cause the death of birds, as long as killing birds was not the underlying intent of the action. That holds true for accidents like oil spills and electrocutions on power lines — and also intentional or even illegal acts, like the spraying of a banned pesticide — as long as birds are not the intended target of the poison.

Industry leaders and administration officials said they expected businesses to continue to voluntarily protect bird habitats. Describing the policy as merely a clarification of the law, they argued that removing the threat of punishment would eliminate legal disputes about the law’s intent and bring regulatory certainty to companies worried that bird deaths would make them criminally liable for millions of dollars.

“It’s horrendous,” said Eric Glitzenstein, director of litigation at the Center for Biological Diversity, an environmental group. “It will just have a really overwhelming negative effect on our already dwindling bird populations.” 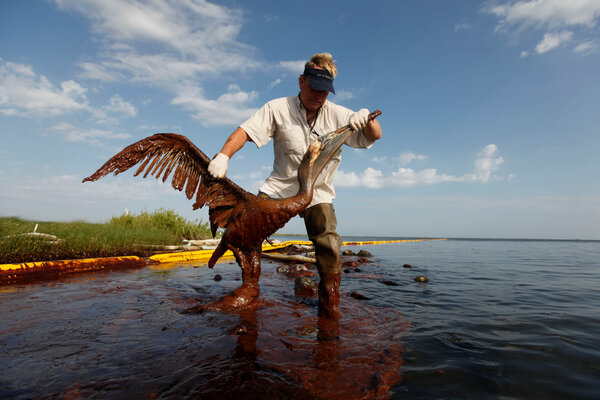 The Migratory Bird Treaty Act was originally enacted to protect birds from poaching and over-hunting. It makes it illegal “by any means or in any manner” to hunt, take, capture or kill birds, nests or eggs from listed species without a permit.

Accidentally killing birds is rarely prosecuted under the law, but there have been notable exceptions, like when the Obama administration prosecuted seven oil companies in North Dakota for the deaths of 28 birds.

The Migratory Bird Treaty Act was also part of the basis for a $100 million settlement with BP for the deaths of more than one million birds in the 2010 Deepwater Horizon spill. And, in 2009, Exxon Mobil paid $600,000 after pleading guilty in the deaths of protected owls, raptors and waterfowl that died in uncovered natural gas pits, oil tanks and wastewater facilities.

Activists said that just the possibility of penalties has helped push industry to take precautions to prevent bird deaths. By announcing that protected birds can be legally killed as long as killing birds isn’t the goal, some said, they worried that the federal government would effectively be removing incentives for companies to take measures to protect birds.

In fact, the Trump administration recently acknowledged as much. An environmental-impact statement issued in late November by the United States Fish and Wildlife Service said that without the inducement of law, industry could be expected to scale back on voluntary bird protections.

Sarah Greenberger, vice president of conservation at the Audubon Society, noted that the Trump administration’s move came just as the organization’s 121st annual bird census, known as the Audubon Christmas Bird Count, was underway. In 2019, she said, despite record participation, 6 million fewer birds were counted.

“While we don’t yet know exactly what caused this decrease, it comes amid new science showing alarming trends in bird declines, like the loss of 3 billion birds in North America since 1970,” she said.

Mr. Glitzenstein said his group and others were planning to challenge the rule in court even as they push the incoming Biden administration to reverse course. A federal judge in August rejected the Trump administration’s legal rationale for the regulation.