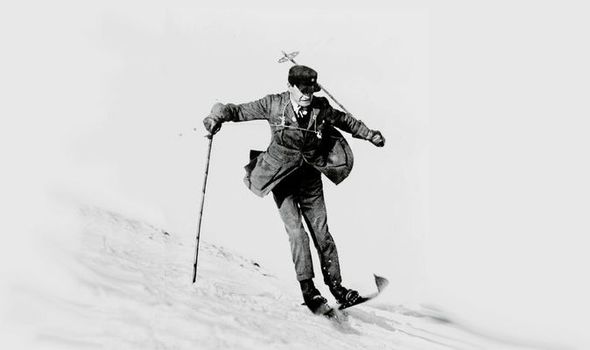 Lunn, a tweedy, bespectacled Oxford graduate, thereby gave birth to the slalom, shaped the future of skiing and took global interest in the sport to a new peak. He wrote later that his venture “risked the mockery of the skiing world” but won rare prestige for Britain after the Swiss and the Germans adopted the format.

Dubbed the “patron saint of British skiing”, his services to the sport earned him a knighthood, and he juggled building the pioneering Lunn Poly travel empire with a successful writing career.

Hurtle forward 100 years and the Daily Express is in the beautiful Swiss village of Murren, more than 5,000 metres above sea level, to mark the centenary of that historic first slalom. In glorious sunshine, Arnold’s descendants – grandson Bernard, 67, greatgrandson Will and his son, Oscar, seven – are skiing the same course in tribute to their illustrious forebear. Former World Cup and Olympic skiers, and other VIPs, help recreate the event as a thank you for putting the Anglophile mountain resort on the map.

The organisers even allow me to test my own rather mediocre skiing abilities on the glinting swathe of snow, snaking out of a pine forest in the shadow of the Eiger Mountain.After picking my way through the planted wooden poles, I asked Bernard, a successful entrepreneur, about his family’s 120-year connection to Murren.

He reveals a fascinating tale of brushes with European royalty and the Nazis, MI6 and the Cold War, and James Bond and Sherlock Holmes. It all began when his great grandfather Henry Lunn arrived in 1902, launching a travel agency to bring wealthy Britons to see not only the Eiger but the awesome Jungfrau, Monch and Schilthorn peaks.

Bernard says: “Lunn’s tours were bringing middle-class English people to the Alps and dressing it up like a club. If you sold it as package tours it might not have appealed.”

Henry’s son, was smitten by the jagged, snowy terrain and became a bold, talented skier, until a debilitating accident left him with one leg shorter than the other. “His climbing days were over,” Bernard says. “So he got into ski race organising instead.

“He was always pictured on skis. He loved ski touring and breaking new routes in the Alps.” The Harrow and Oxford-educated eccentric was so gung-ho he would join moonlight expeditions up the slopes, where he and friends would drink bottles of fizzy Austrian wine.

During the First World War, he helped rehabilitate injured British prisoners of war being held at an internment camp in Murren teaching them to ski.

His slalom breakthrough came at a time when Norway dominated winter sports and the convention was for skijumping or cross-country skiing on the flat.

Arnold, then 35, wanted a race which would assess a skier’s ability to twist and turn downhill at break-neck speed.

“My grandfather said, ‘It’s not just about speed going straight downhill – you’ve got to have turns’. The natural things on the slopes were trees and all he was doing was planting some poles in the ground which were like trees,” recalls Bernard. Two officials at the line kept time with watches, an orange was put on top of each pole, and penalty points were docked if a skier knocked one off.

Bernard says: “I’m only going from ancient photographs but I think my grandfather would be somewhere on the course watching people.”

There were no brightly coloured waterproofs or breathable anoraks and salopettes, or blades, poles and helmets made of high-tech synthetic materials. Arnold’s generation took to the slopes in smart tweed suits, starchy shirts and ties, woolly jumpers and soft fabric caps.

“The skis were made of wood and the bindings were very primitive but I think they worked,” says Bernard. “The most fun thing to look at is the tie.Who would think of putting on a tie when you go skiing?”

Murren attracted the cream of society and Arnold would find himself pictured in Tatler alongside, say, the King and Queen of Belgium, or Sir Roger Keys, admiral of the British fleet.

So gay was the scene, he advised in one of his ski guides: “People return from Switzerland looking old and wizened, collapsing utterly when they reach sea level.”

The Murren glitterati included Sir Arthur Conan Doyle, who became a friend of the Lunn family. Henry would later describe how he helped kill off Sherlock Holmes by taking Conan Doyle to the Reichenbach falls, just 20 miles away.

Inspired by the trip, the author mapped out Holmes’ dramatic showdown with archenemy Moriarty, followed by their plunge into the foaming waters below.

Lunn junior, who was actually born in Madras, India, but moved back to Britain as a baby, would later join the paranormalobsessed writer in probing seances.

Arnold won and Monty was ousted. In 1936, his tireless promotion of the slalom paid off when it was included in the winter Olympics at Garmisch-Partenkirchen.

He refereed the race himself, having pointedly avoided the games’ opening procession to avoid endorsing the Nazi organisers, and – behind the scenes – used his clout to free a detained Jewish friend.

Bernard says: “He saw it as his duty to do something to be anti-Hitler. The Nazis really wanted theWinter Olympics and he basically said ‘Unless you let him out of jail, I will use my influence to make sure they don’t happen in Garmisch-Partenkirchen’.”

Arnold was knighted in 1952 for developing sport and Anglo-Swiss relations. He also wrote more than 70 books on travel, religion and world affairs. He had three children by his first wife Mable, an Earl’s daughter, including Bernard’s father Peter, and passed away in 1974.

Bernard says: “He had a good sense of humour and was very quick on his feet. He loved the mountains and the more people who were able to enjoy that, the more pleasure he got from helping it happen.”

Peter became one of Britain’s top skiers, captaining the British team, aged just 22, at Hitler’s Olympics, and winning Britain’s highest placing in the only men’s event.

In 1941, MI6 recruited him and he spent 30 years as a spymaster, gathering intelligence on the Nazis, then the Soviets in espionage hotspots like London and Berlin.

He was an expert phone-tapper and his successes included Operation Conflict, an audacious Cold War caper in which he had a tunnel dug out under Vienna so his agents could intercept Russian cables.

In the 1960s, fictional spies came to Murren when it was chosen as the location for Bond villain Blofeld’s lair in the blockbuster movie On Her Majesty’s Secret Service. George Lazenby enjoyed his sole outing as 007, Diana Rigg played his love interest and Telly Savalas as Blofeld plotted world domination from the Schilthorn peak.

Bernard recalls: “My brother and I earned a hundred francs as extras. We played Blofeld’s men. We later went to see the movie and looked forward to seeing nice pictures of ourselves skiing down the hill.

“If you look very, very hard, you will see some point where a couple of the bad guys are in their white uniforms lying dead in the snow.That’s us!”

The movie gifted tourist bosses a new marketing focus and the spectacular, disc-shaped building used as Blofeld’s base was turned into a Bond visitor centre and restaurant atop of the Schilthorn.

After our slalom celebration, Will Lunn unveiled a memorial to his great grandfather and gave a speech to a crowd of about 150.

“I never met Arnold,” he says.

“But he was obviously a very passionate and determined man. My father used to say one of Arnold’s biggest fears was that his efforts would die out after he was gone. He couldn’t have been more wrong.”