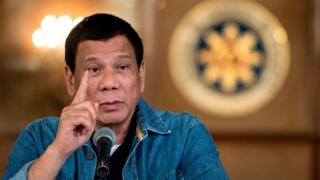 Capital punishment opponents expect a steep battle to prevent President Rodrigo Duterte from reimposing the death penalty, as he renews calls for the law as part of a “drug war” that has already killed thousands of Filipinos.

Few were surprised when Mr Duterte last month pushed, once again, to reintroduce the death penalty for drug offenders.

Since coming to power in 2016 he has waged a brutal crackdown on suspected drug users and dealers, issuing police with shoot-to-kill orders while encouraging citizens to kill drug users too.

Officially the police say they shoot only in self-defence and data shows more than 8,000 people have been killed in anti-drug operations. The nation’s human rights commission estimates a toll as high as 27,000.

The piling bodies have been documented by photojournalists whose images of dead suspects face-down in pools of blood after a police raid, or strewn on streets in suspected vigilante murders, have shocked the world.

“The death penalty would give the state another weapon in its ongoing war against drugs,” said Carlos Conde, Philippines researcher for Human Rights Watch.

Mr Duterte was restrained, at first, by the upper house of parliament. But last year’s mid-term elections saw his allies win control of the senate and many fear the law could now be passed.

Twenty-three bills have been filed across both houses to reinstate the death penalty for drug crimes, including possession and sales. Committee deliberations began last week.

Mr Conde says he would like to be proved wrong but senses the law “is as good as passed”. He points to the swift recent passing of the controversial anti-terrorism law, and the speed at which ABS-CBN, a broadcaster critical of the president, was forced off air.

The move would be a breach of international human rights law.

But this is unlikely to faze Mr Duterte, who frequently expresses his disdain for human rights checks. Last year the Philippines left the International Criminal Court as it was probing accusations of crimes linked to his drugs campaign.

Surveys by the Social Weather Stations, a pollster, have shown the war on drugs remains popular among Filipinos despite experts saying the signature policy has failed to curb drug use or supply. A majority are also in favour of reinstating capital punishment.

But a closer look at the results shows an alternative picture, says Maria Socorro Diokno, secretary-general of the Free Legal Assistance Group, a network of human rights lawyers.

When presented with alternatives to capital punishment for crimes linked to illegal drugs, for instance, most favoured other options.

“They begin to think that death is not always the answer,” said Ms Diokno.

Ms Diokno, who leads her group’s anti-death penalty task force, has been braced for a battle with Mr Duterte ever since he vowed to bring back the death penalty as part of his election campaign.

She knows that minds can be changed because she was part of the movement that succeeded last time.

The death penalty has been abolished twice before – first in 1987 and then again in 2006 after being reinstated in 1993.

The last push for abolition was led by the Catholic church, which holds considerable influence over Filipinos in the largely Catholic country while Mr Duterte is an open critic.

Last week the Clergy of the Archdiocese of Manila condemned the “lack of independence and imprudence” of some lawmakers in supporting the president on the issue.

“We see such acts as betrayal of the people’s interests and an implicit support to the creeping authoritarian tendencies exuded by this administration,” it said.

In his annual address to the nation last month Mr Duterte claimed reinstating the death penalty by lethal injection would “deter criminality”.

But there is little evidence to prove that the death penalty can be a deterrent. Instead research has shown the punishment frequently affects the most disadvantaged.

In the Philippines alone the Supreme Court said in 2004 that 71.77% of death penalty verdicts handed by lower courts were wrong.

By imposing the death penalty for drug offences, the Philippines would also be moving away from what Harm Reduction International has identified as a downward global trend in using the penalty for such crimes.

It says 35 countries and territories retain capital punishment for drug offenders but only a few carry out executions regularly. Five of the eight “high application states” are in South East Asia.

He spent nearly seven years jailed in the Philippines as a pre-trial detainee before he was acquitted of a campus murder that took place at his university when he was 20.

The death penalty was still intact at the time and prosecutors had sought it for the 10 men charged.

Worse than his overcrowded cell and frequent prison riots, he says, was the “agony of waiting” for hearings.

“It was traumatic thinking that you can be put to death for a crime you did not commit,” said Dr Narag, speaking from the US.

Now 46, he was one of five men eventually acquitted, while the others were sentenced to life imprisonment.

The experience has shaped his career. He now researches prolonged trial detention in the Philippines, while advocating for criminal justice reform.

Dr Narag says that if he hadn’t managed to track down a key witness, an overseas worker, to return home and testify, proving he wasn’t at the crime scene, he may have been convicted.

Through his advocacy he wants Filipinos to know the consequences of mistaken convictions, which could become mistaken executions if the law changes, in an already struggling justice system.

The scope of and timeline for the eventual death penalty bill put to vote in parliament is uncertain, especially during the Covid-19 pandemic. Some have argued the bill should not be a priority.

Gloria Lai, Asia director of the International Drug Policy Consortium, says the death penalty has not solved the drug-related problems of any country.

“It is the poor and vulnerable who bear the harsh punishment of criminal justice systems in grossly unjust ways,” she says.