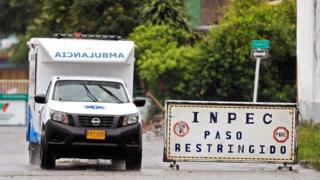 The director of a prison in the Colombian city of Villavicencio says overcrowding is to blame for one of the country’s worst coronavirus outbreaks.

More than 850 inmates and members of staff have been infected.

“How can I ensure there is isolation if there are people sleeping under the beds and in the bathrooms?” asked prison director Miguel Ángel Rodríguez.

He said that when the outbreak started, there were 1,835 inmates at the jail, more than double its capacity.

Mr Rodríguez was answering questions about the outbreak at Villavicencio prison during a virtual session of the regional assembly in Meta province.

He alleged that the Colombian state had “abandoned” the jail. “There are working groups and security councils where a lot of ideas are thrown around and lots of papers are signed, but there are no results. Red tape is paralysing us, and inside the prison we’re doing what we can.”

Two weeks ago, police foiled an escape attempt by a group of inmates who had started building a tunnel.

The prison director said 1,750 inmates were currently being held at the jail and that the overcrowding made it impossible to slow the spread of the virus.

“The areas we use to isolate [inmates] are not ideal,” he said, adding that prison authorities were moving prisoners into one of the carpentry workshops to create more space.

To make matters worse, there is also a shortages of doctors at the prison.

Last week, Colombia’s director of prison services, Lissette Cervantes, said that doctors working at Villavicencio jail had quit because they had not been given the necessary protective equipment.

“It’s not because they just felt like it or even because they were afraid, they just can’t go unprotected into what is like a war [against the virus],” Ms Cervantes said.

Nationwide, Colombia has more than 11,500 confirmed cases of coronavirus and 479 people have died, according to a tally by Johns Hopkins University.