Organisers say that as many as 37,000 people joined in the 11th consecutive weekend protest against prime minister. 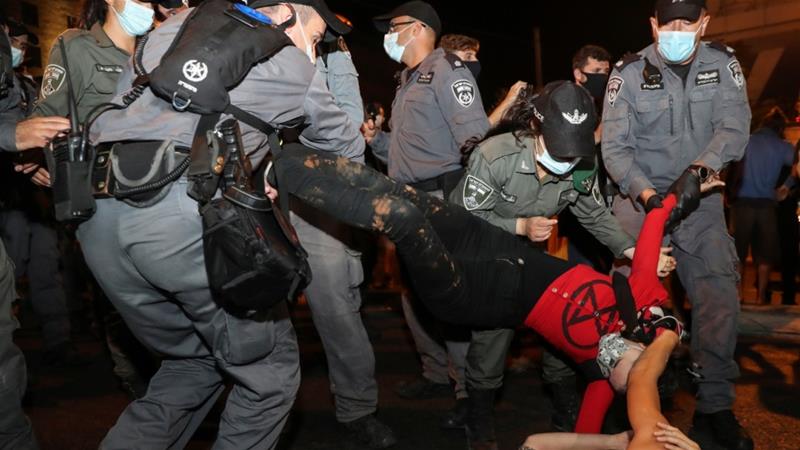 Thousands of Israelis demonstrated in Jerusalem in a continuation of months-long weekend rallies demanding the resignation of Prime Minister Benjamin Netanyahu, who faces a corruption trial and accusations of mishandling the coronavirus crisis.

Media reports say some 20,000 took part in the demonstration in Jerusalem on Saturday, while organisers, citing bracelets they hand out to all participants, said attendance was at 37,000.

Smaller protests also took part in other parts in Israel, including overpasses and outside Netanyahu’s private house in the upscale town of Caesaria.

At the main rally in Jerusalem, protesters gathered at the entrance of the city and marched to Netanyahu’s official residence, holding Israeli flags and black flags symbolising one of the protest movements.

“Enough with Division!” and “This is not politics, this is crime,” read some of the placards.

Netanyahu’s governing coalition temporarily survived collapse this week after an agreement with “alternate prime minister” Benny Gantz, his rival and main coalition partner, to delay a budget vote until December.

If the two coalition partners had failed to agree on delaying the budget’s approval, the government would have collapsed and Israel would have gone to its fourth general elections in less than two years.

Netanyahu of the Likud party and Gantz’ Blue and White formed the coalition in May after three inconclusive elections, but differences between the two remain.

Netanyahu’s handling of the coronavirus crisis is driving the protest movement. After controlling the virus in its first stages in the spring, Israel reopened its economy too quickly in May, leading to a spike of cases. Israel is struggling with a number of confirmed infections exceeding 113,000 cases and the death toll is approaching 1,000.

Business owners, day-to-day workers and smaller, vulnerable entrepreneurs who were hit hard by the pandemic-triggered closures take part in anti-Netanyahu demonstrations. The unemployment rate is hovering above 20 percent.

Netanyahu’s three corruption cases also have added momentum to the protests. Last year, he was charged with bribery, fraud and breach of trust.

Many protesters say Netanyahu should not serve as a prime minister at a time when he is on trial for serious charges.

In January, his trial will move to a witness phase with three sessions a week.