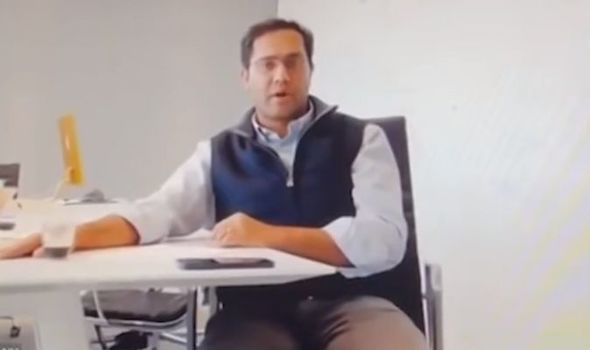 Vishal Garg, chief executive of Better.com, told staff members on a video call they were part of an “unlucky group” and their contracts would be terminated immediately. The CEO explained this was the second time in his career that he has been forced to deliver the horrible news and said last time he was brought to tears.

Mr Garg said 15 percent of staff at the US firm would be affected and cited problems with the housing market.

He also noted employee performance and productivity as another contributing factor.

Recordings of the message have since been leaked and sparked fury online.

Users on social media have branded the decision “cold”, “harsh” and “a horrible move”, especially as it comes in the lead up to Christmas.

In the Zoom call last Wednesday, Mr Garg said: “Hi everyone, thank you for joining. I come to you with not great news.

“The market has changed, as you know, and we have to move with it in order to survive so that hopefully we can continue to thrive and deliver on our mission.

“This isn’t news that you’re going to want to hear but ultimately it was my decision and I wanted you to hear it from me. It’s been a really, really challenging decision to make.

“This is the second time in my career that I’m doing this and I do not want to do this. The last time I did it I cried. This time I hope to be stronger. But we are laying off about 15 percent of the company for [a number of] reasons: the market, efficiency and performances and productivity.

“If you’re on this call you are part of the unlucky group that is being laid off. Your employment here is terminated. Effective immediately.”

The mortgage firm aims to use technology to make buying a house “faster and more efficient”.

Better.com received a cash injection of $750million (£564million) from investors last week and was recently valued at around $7billion (£5.3billion), according to Forbes.

Mr Garg has since apologised for the way he handled the situation.

He said: “I want to apologise for the way I handled the layoffs last week.

“I failed to show the appropriate amount of respect and appreciation for individuals who are affected and for their contributions to Better.

“I own the decision to do the layoffs, but in communicating I blundered the execution. In doing so, I embarrassed you.”