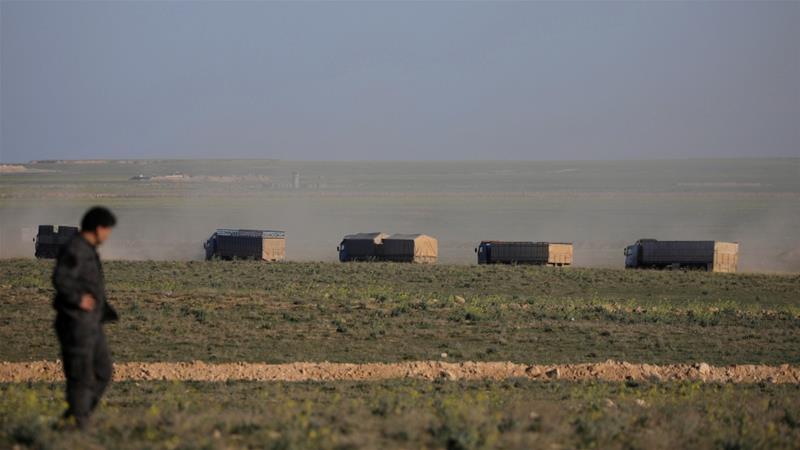 A convoy of trucks evacuating civilians from a shrinking area controlled by the ISIL fighters in Syria’s northeastern province of Deir Az Zor has left the enclave as an operation to drive them out continues.

About 10 trucks carrying men, women and children emerged on Wednesday from the tip of a humanitarian corridor used in past weeks to evacuate people from the village of Baghouz, ISIL’s last patch of territory along the Euphrates River in eastern Syria.

The vehicles were carrying ISIL families and other civilians who were living in Baghouz, he said, with some being transported to al-Hol camp, where humanitarian conditions are dire.

The SDF, spearheading the ground battle, say the evacuation is a crucial step towards capturing the area. Both the SDF and the US officials have said the presence of civilians in ISIL’s last pocket, which was targeted by air attacks again on Tuesday, has slowed their advance.

About 300 fighters and less than 2,000 civilians have been trapped in the village.

The United Nations human rights chief on Tuesday accused the armed group of possible war crimes, noting some 200 families were facing intensified air and ground attacks by the US-led coalition forces and civilians were being prevented from fleeing.

The ISIL fighters still hold out in a remote area of desert in central Syria, and have staged attacks in parts of Syria as well as Iraq – where they once controlled large swaths of territory.

Separate military campaigns pushed the group from most of its territory in 2017, including the major cities of Mosul and Raqqa, about three years after ISIL soldiers rapidly defeated local forces and declared an Islamic state in an area the size of the United Kingdom.

Meanwhile, tens of thousands of Syrian refugees continue to face harsh living conditions at the al-Rukban camp near the Syria-Jordan border, despite Russian attempts to set up “humanitarian corridors” through the region.

Residents of the camp have refused to leave as the deadline for the corridor, facilitated by Syrian President Bashar al-Assad’s main ally – Russia – passed on Wednesday. They say they do not feel safe enough and fear reprisals from the Syrian government.

“The crossings opened by the regime and the Russian military are claimed to be safe, but the people here are not feeling any sense of safety or stability,” one resident said.

Another man from the camp said international organisations such as the UN should monitor these crossings.

“For me, to leave here would be going from one death trap to another,” an elderly woman said, adding she would leave only if there was a safe place guaranteed for her family.

“Opening the crossing is a good step, but we want it to be overseen by the UN,” she said.

Al Jazeera’s Imran Khan, reporting from Turkey’s Gaziantep on the border with Syria, said residents had an “enormous amount of suspicion from the people of the Rukban camp”.

Roughly 60,000 Syrian refugees are subject to harsh conditions at the camp, located in the desert region near the Syria-Jordan and Iraq border.

The UK-based Syrian Network for Human Rights recently reported a growing number of fatalities at the camp from starvation, disease and a chronic lack of humanitarian supplies.

A 24-hour window by Syrian government and Russia for families living in the Rukban refugee camp to return has now closed.