Switzerland is deciding on whether to ban Muslim face veils in a national referendum – a move that was instigated before the coronavirus pandemic.

Voters will decide on a far-right proposal to ban anything that covers the face, like burkas and niqabs, making it a poll that is seen as a test of attitudes toward Muslims.

Masks to protect against COVID-19 will still be allowed as they are covered by the potential exemptions, which say coverings are allowed at religious sites, for health reasons or during particular weather conditions.

Often referred to as “the burka ban”, the initiative by right-wing groups also includes outlawing the wearing of ski masks and bandanas often used for protesting.

Currently, masks to protect against COVID are mandatory in busy public places in Switzerland due to the pandemic.

The proposal would ban the wearing of other face coverings in public, notably in the streets, on public transport and in offices, restaurants, shops and football stadiums. Exceptions are not allowed for tourists.

It has been reported that only a handful of Swiss residents wear face coverings like burkas and niqabs.

The proposal under the Swiss system of direct democracy does not mention Islam directly but local politicians, media and campaigners have said it is an attack on the religion. 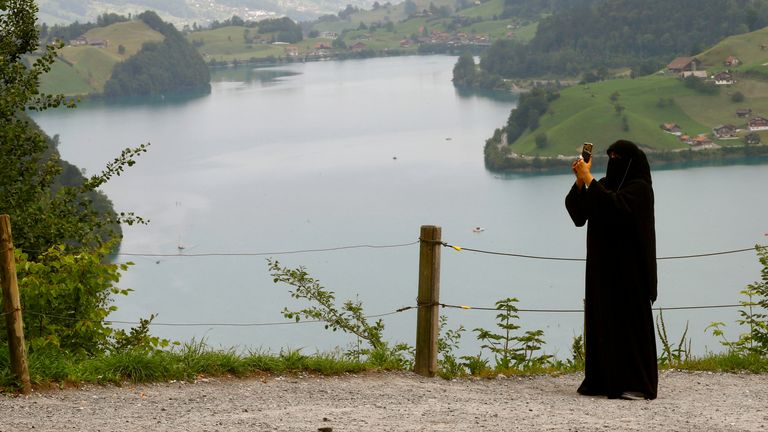 Opinion polls have indicated the measure could pass narrowly and the proposal will become law.

Walter Wobmann, chairman of the referendum committee and a member of parliament for the Swiss People’s Party, has said: “In Switzerland, our tradition is that you show your face. That is a sign of our basic freedoms.”

He described facial coverings like the burka and the niqab as “a symbol for this extreme, political Islam which has become increasingly prominent in Europe and which has no place in Switzerland”.

The proposal, which to some seems out of date in a Europe where the wearing of masks for protection is now increasingly common and might well remain so for some time, gathered the necessary support to trigger a referendum in 2017.

Five other European countries have already introduced such a ban, including France and Austria. Two Swiss cantons already have local bans on face coverings.

If the move fails, there is a possibility visitors may still be obliged to show their faces at borders.

It is one of three referenda taking place on Sunday. Voters will also be polled on a government-backed electronic identity scheme and a free trade accord with Indonesia.

In 2009, Swiss people voted to ban building any new minarets.