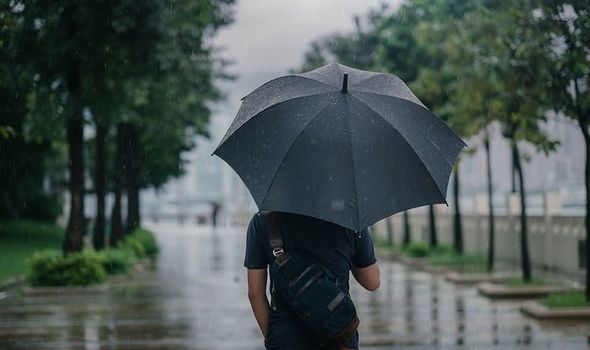 Many areas saw sudden fierce rain as the latest in a series of deep weather systems swept across the country. But amid the gloom, weathermen predicted that a much warmer and sunnier August, with a plume of air set to move up from Africa.

The worst of the rain was seen in Scotland and the Midlands where yellow and amber rain and thunderstorm warnings were in place.

Met Office warnings urged people to remain vigilant as flooding “could happen quickly” with the possibility of damage to buildings by lightning strikes, hail or strong winds.

As much as 4ins of rain was expected to have fallen in 24 hours in some areas of the country by midnight last night, with 2.5ins widely expected.

And as the washout continued, high coastal winds saw a daring sea rescue off the South Coast.

In the terrifying night-time incident, a yacht battered by high winds gusting up to 100mph was forced to send out a distress signal.

One of the three crew members suffered a serious head injury on board the 37ft catamaran after it was hit by the fierce winds off the coast of Selsey, West Sussex. Lifeboats were dispatched at 2.52am after the boat reported that all navigation aids had been lost and its sails and rigging had been torn.

The lifeboat towed the vessel into nearby Chichester harbour and the injured crew member was given medical assistance.

A spokesman for the RNLI said: “The lifeboat requested an ambulance meet them on arrival at the harbour.”

Heavy rain and thunderstorms has affected nearly all areas of the country, with London and the South-east hit particularly hard.

Earlier in the week, a month’s worth of rain fell in one 24-hour period in London’s St James’s Park, making it the second wettest July day on record in the capital.

And 100 patients were evacuated from a hospital in London after an entire block suffered a power outage during flooding.

Last night, meteorologists said the thunderstorms would die away in the coming days, with more sporadic showers and broken sunshine in their wake.

Forecaster Alyssa Smithmyer, from AccuWeather, said that hot air from Africa is likely to send temperatures soaring in August.

She said: “In the next few days, temperatures are anticipated to shift closer to normal.

“During the first week of August, temperatures are expected to likely do the same and return to near normal, with a few slightly warmer days possible later in the week as the jet stream influence transports some warmer air up from Africa.”

While the first half of August will be dominated by a mixture of sunny spells and showers, the second half of the month will bring warmer conditions.

Met Office spokesman Stephen Dixon said: “It’s too early to say if we will have another heatwave in August, but by mid-August there are signals of high pressure bringing drier and warmer air.”