Suez Canal: Ever Given remains stuck after efforts to move it

The 220,000-ton Ever Given has shifted at its stern but tug crews face strong winds and tides as they battle to free it fully. More than 300 other vessels were last night queueing to pass through the canal that links the Mediterranean and the Red Sea. Others have already been diverted to the far longer journey around the southern tip of Africa.

The 120-mile Suez shortcut is used by 12 percent of the world’s shipping. There are fears for retailers and other industries as supplies and goods are held up.

When the Japanese-owned ship ran aground on Tuesday, initial reports blamed high winds and a sandstorm that affected visibility.

But Osama Rabie, chairman of the Suez Canal Authority, yesterday suggested weather conditions were “not the main reasons” for the jam near the Egyptian city of Suez, four miles from the water- way’s southern entrance. He added: “There may have been technical or human errors.

“All of these factors will become apparent in the investigation.” At least 14 tugs were yesterday using high tide to try to free the ship, which holds 20,000 containers.

Extra rescue teams were being sent to the scene today after dredgers removed about 20,000 tons of sand from around the Ever Given’s bow by Friday night.

Officials said 9,000 tons of water – stored in tanks to stabilise the ship – had been taken off to help lighten the vessel, which is as long as four full-sized football pitches. 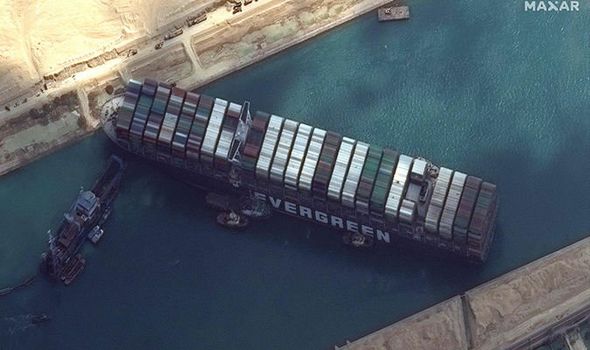 They said the stern had begun to come free on Friday night and the rudder and propeller had started working again.

Yukito Higaki, president of Shoei Kisen, said the vessel did not appear damaged and was not taking on water, so it should be able to operate safely once refloated.

If a combination of digging away the sand and pulling with tugs fails to free the ship, rescue teams might have to take off some containers to help it rise higher out of the water.