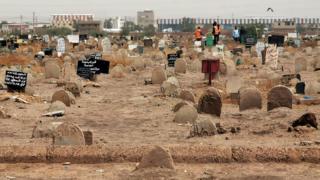 A mass grave has been discovered in Sudan containing 28 bodies, thought to be the remains of army officers executed for carrying out a coup attempt in 1990 against former President Omar al-Bashir.

Bashir had seized power in a military coup the previous year.

In April 1990, the officers had surrounded an army headquarters and several barracks before being arrested and killed.

He went on trial this week over the 1989 coup which brought him to power.

How were the bodies found?

The bodies were found in Omdurman, the twin city of the capital Khartoum.

Public prosecutor Tagelsir al-Hebr told AFP news agency that the search for bodies was part of investigations into atrocities committed under Bashir’s rule.

“It took three weeks and the work of 22 experts from different fields to locate it.”

“Operations are under way to dig up the bodies and medical experts will carry out tests to identify the remains,” he is quoted as saying by AFP.

It is the second mass grave discovered recently.

Last month, the public prosecutor said investigators had discovered a mass grave suspected to contain the remains of students killed in 1998 as they tried escaping military service at a training camp.

Where is Bashir now?

Bashir was overthrown last year after months of pro-democracy demonstrations.

He is currently in prison in Khartoum, having already been convicted of corruption.

The International Criminal Court in the Hague also wants to try Bashir for genocide and war crimes committed in the Darfur region, where 300,000 people were killed.