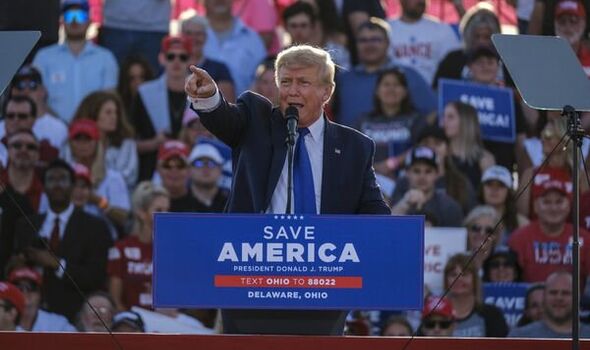 The 45th President mocked Mr Morgan while speaking to supporters at a ‘Save America’ rally in Greenwood, Nebraska.

Mr Trump jetted off to the Cornhusker State in a bid to shore up support for candidates he has endorsed ahead of the Nebraska primary elections on May 10.

Mr Morgan, who left ITV’s Good Morning Britain in March 2021, sat down with the ex-POTUS in an interview which aired on TalkTV last Monday.

However, the interview appeared to fracture Mr Trump’s relationship with Mr Morgan, who won the 45th President’s Celebrity Apprentice show, after the TalkTV host shared footage of the ex-POTUS calling for the cameras to be turned off.

The interview also got off to a bad start after the former UKIP leader and GB News host Nigel Farage handed Mr Trump a dossier which contained critical comments made by Mr Morgan about the ex-Commander-in-Chief.

The feud between Mr Morgan and Mr Trump appears to have continued as the former POTUS issued a statement shortly before he took to the stage in Greenwood.

He said: “Ratings for the Piers Mogan interview with me were great!

“Unfortunately, after that interview, his show bombed completely because of the fake narrative he tried to portray.

“The fact is, I got a new close-up glimpse at Piers, and he no longer has what it takes.

Mr Morgan had also been critical of Mr Trump during the interview after the ex-POTUS yet again peddled the unfounded claim the 2020 US Presidential Election was rigged and said he instead won by a “tremendous margin”.

TalkTV’s star man replied by saying the poll was “free” and “fair”.

After taking to the stage in Nebraska, Mr Trump also said: “Did you see Piers Morgan?

“He’s sort of had it, I think Piers is over the hill.

“He opened the show with an interview [with me], I did him a favour, I didn’t want to do his stupid show.”

He went on to claim Mr Morgan’s TalkTV ratings had “bombed” by as much as 70 percent since his opening day interview.

Piers Morgan’s show ‘Uncensored’ had a peak viewership of 400,000 as the Rupert Murdoch-backed channel launched on April 25.

His first outing was more successful than Andrew Neil’s when 336,000 tuned in for the launch of GB News last summer.

However, according to the Metro, Mr Morgan’s viewership fell to 216,000 on Tuesday.

BARB figures for Wednesday night suggested the show suffered yet another drop as 123,000 tuned in for Mr Morgan’s interview with heavyweight boxing champion Tyson Fury.