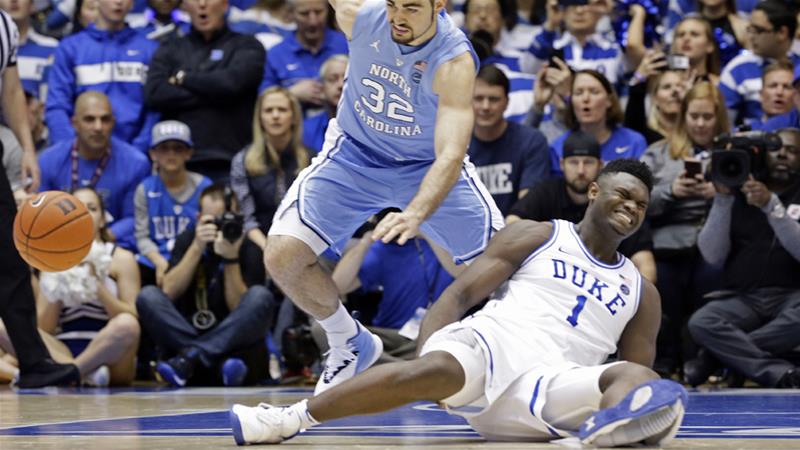 The man expected to be this year’s number one pick in the NBA draft has given potential suitors a real scare after a freak accident in a college basketball game.

Zion Williamson’s shoe exploded during Duke’s showdown with archrivals, the University of North Carolina, on Thursday.

The forward injured his knee after his foot slid out through the bottom of his sneaker. It happened 33 seconds in, and Zion missed the rest of the game.

The shoe even Barack Obama is talking about. More coming up on @AJEnglish at 1845 GMT with @marilyn_payne #ZionsShoe pic.twitter.com/vRQHrKAMBC

Duke are yet to confirm the full extent of the injury. However, it has already affected the maker of Zion’s sneakers, Nike. After Wednesday’s close, Nike’s stocks dropped overnight by 1.17 percent.

Nike is the biggest brand in basketball with the NBA locked into an eight-year kit deal. In a statement, Nike said, “The quality and performance of our products are of utmost importance. While this is an isolated occurrence, we are working to identify the issue.”

Sports reporter Marilyn Payne was at the game and said, “Adidas and Under Armor are two brands that have already benefited from this globally. Overnight both of their stocks rising as well.”

The financial impact could also spill over into the NBA.

Though Williamson is only 18 and in his first year of college, Payne said, “If it’s not a recoverable injury, if there’s irreversible damage, the financial ramifications of the players that would then come after him, and certainly of his own pocket come the draft time, would be impacted very significantly.”

Former US President Barack Obama was in the stands and was one of the first to spot the shoe tear.

The ex-president tweeted the athlete. “Zion Williamson seems like an outstanding young man as well as an outstanding basketball player. Wishing him a speedy recovery,” said Obama.

With fingers pointed at Nike, Williamson’s massive frame would likely test the limits of any shoe. After all, he’s not your average 18-year-old weighing in at 129kg and standing two metres tall.