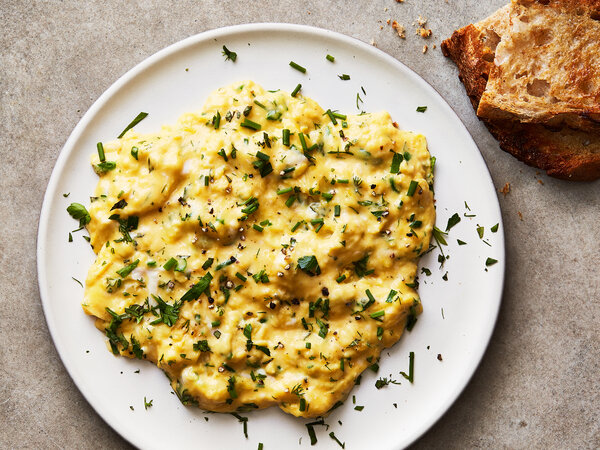 Happy New Year! Do you make New Year’s resolutions? I’ve made quite a few, some of which have even stuck. I resolved to run at least a mile every day in 2020, which I did for 366 days (I didn’t realize it was a leap year when I committed). I still manage to run about six times a week; my tipsy resolution blossomed into a clear-minded habit. Even when it’s 10 degrees out and I have to bundle in so many layers that my “run” resembles a kind of zippy waddle, I come back a calmer, happier person.

I’ve long suspected that the food wizard J. Kenji López-Alt resolves to one-up himself every year. Here he comes right on cue with a new recipe for what truly are the creamiest scrambled eggs (above) ever. His last version was exquisitely rich, but this recipe outdoes it by cooking the eggs in heavy cream, a method he adapted from egg drop soup. He beats the eggs and then drizzles them in a slow, steady stream directly into a couple of tablespoons of simmering heavy cream, essentially poaching them. It could become a habit.

Many people greet January with resolutions about what to eat. If eating more plant-based meals is one of yours, I’ve got your back with a new recipe for quick rosemary-braised cannellini beans with tomato and frizzled onions. Made with canned beans enriched with loads of olive oil, it’s a delightful dish you can get on the table in 30 minutes.

Eating more fruit and veggies every day is perennially on my personal resolution list. David Tanis’s terrific winter vegetable curry with squash, parsnips and chickpeas — served with a cooling apple raita — checks those boxes with pizazz. Hetty McKinnon’s one-pot pasta with mushrooms and leeks also beckons, with its creamy ricotta topping. And although I’ll probably cook it in a regular pot rather than a slow cooker, I know Sarah DiGregorio’s cauliflower, potato and white bean soup — with its mandatory garnish of ruffled potato chips — will warm me when those icy January winds blow.

Then, because my other perennial resolution is to never skip dessert, I’ll whip up a batch of Dorie Greenspan’s ginger-zapped baked apples, accompanied by Krysten Chambrot’s salty-sweet peanut butter-miso cookies.

These recipes, plus many thousands more, are available when you subscribe. If cooking more is on your list of New Year’s resolutions, a subscription to New York Times Cooking will get you there. You can also check us out on TikTok, Instagram and YouTube, where Claire Saffitz demonstrates three candy recipes (chocolate fudge, pistachio honey nougat and salted caramels) that taste just as good in January as they do during the holidays.

Now, why does New Year’s Day fall in the dead of winter (in the Northern Hemisphere)? For the ancient Romans, like the Babylonians before them, the year began in the springtime month of March. At some point they tacked on January and February after December (the 10th month at the time). Then in 153 B.C. the Roman government decided to start the administrative year on Jan. 1. That decision stuck. Even so, for centuries after the fall of Rome, much of Europe celebrated New Year whenever they felt like it. Even here in Britain’s American colonies, we called March 25 New Year’s Day until 1752.

January is named for Janus, the two-faced god of doors and gates who looks backward and forward at once. Today the light has apparently started to return, but only just, so it feels like it could change its mind. This is hope’s most fragile moment — the moment when resolutions can really make a difference.