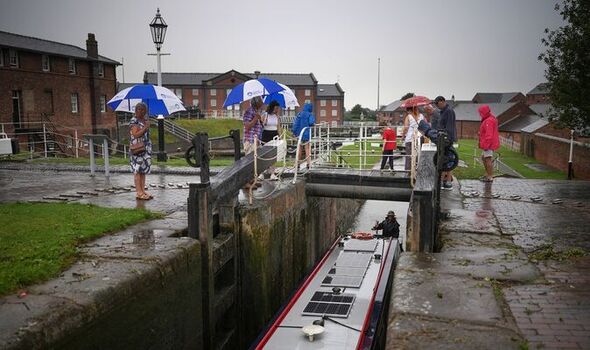 The downpours caused flash flooding because the earth has been baked so hard it cannot absorb all the water. Ironically some of the most drenched areas – in Cornwall and Devon – were hit with their first hosepipe ban for 26 years.

Around 24 million people will soon be living with similar restrictions – and experts warn this week’s washout will not be enough to replenish supplies.

Chief forecaster Dan Suri said: “The change in weather will see the heat of the last few days slip away from the South and East.

“This will be replaced with unsettled conditions – heavy showers, thunderstorms and torrential downpours being key hazards over the UK untilWednesday.

“Although not all places will be affected, where thunderstorms occur there is the potential for very large rainfall totals.

“But when that heavy rain is falling on extremely dry ground, the risk of flash flood- ing is much more pronounced.” Yesterday’s deluge followed months of little rain and record temperatures, leaving much of Britain looking like a desert. Firefighters across the country tackled blazes at the weekend when temperatures climbed to around 97F (36C).

On Friday the National Drought Group declared an official drought in eight areas of England, including Devon and Cornwall, Kent and south London, East Anglia and the East Midlands.

A hosepipe ban is being introduced to Cornwall and parts of north Devon for the first time in nearly three decades.

South West Water said yesterday it would come into force from August 23 to protect dwindling supplies.

The region has had little rain for the past eight months and July was the driest for nearly a century.

South West Water said: “It’s the first time in 26 years but we’ve been left with no other choice.We need to have a hosepipe ban now to protect our precious water. We’ve done our best to avoid this ban. We’ve increased the amount of water we can store, doubling it since the last drought in 1976.”

It follows bans by Southern Water in Hampshire and the Isle of Wight, South East Water in Kent and Sussex, Welsh Water and Manx Water.

Thames Water will announce one next week. But there were warnings people will not take the drought seriously because of sudden rain. Christine Colvin, of the Rivers Trust, said: “Just because it rains, it doesn’t mean the drought is over.

“It seems very counterintuitive, but it’s going to take sustained rain to replenish the aquifers and reservoirs.”

Professor Hannah Cloke, an expert in hydrology at the University of Reading, said major cities are at risk of flooding. She said thunderstorms are “very difficult to predict”, adding: “If you get heavy rain in a city, the drainage system can cope up to a point but really heavy rain can overwhelm the system. The rain cannot run away quick enough.

That is why it is so dangerous for cities with these surface area floods.” Robert Caudwell, chairman of the Association of Drainage Authorities, said companies cannot do much to prevent groundwater flooding.

He said: “It’s the surface water flooding that we’re more concerned about at the moment, which is something that all of the water management industries are concerned about. But there’s very little that we can do apart from making sure all of our systems are properly maintained.”

Water firms are under pressure to fix leaky pipes after outrage over the 1.3 billion litres wasted every day.

The Prime Minister’s spokesman said: “Companies that are not taking action to address leaks or invest in infrastructure will see the Government step in.”

Asked whether drought was now a growing priority, he added: “Clearly these are not regular events, these sorts of long periods of dry weather or extreme heat.

“Because of climate change, the possibility of seeing them has increased and so as a responsible Government you need to adjust long-term planning to that end and that’s what we are doing.”