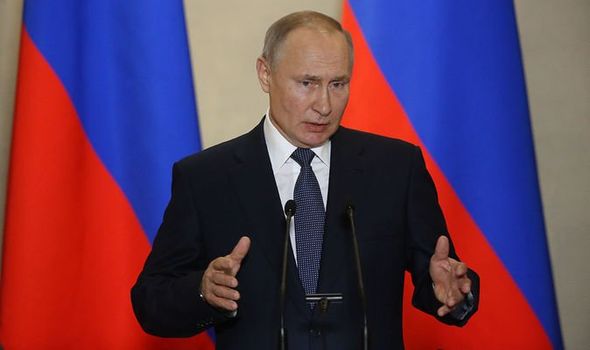 It comes as US intelligence sources warned that Russia is poised to attack the country next year with as many as 175,000 troops, citing a build up of infantry, tanks and artillery in four key locations. Ukraine officials say the attack could happen as early as January. Ian Brzezinski, whose father, Zbigniew, was national security advisor under President Jimmy Carter, said there were “alarming parallels” between today and 1980, when the US employed robust tactics to dissuade the USSR from invading Poland to quell its pro-freedom Solidarity movement.

“Putin has more than 100,000 Russian troops along the eastern and northern frontiers of Ukraine today, as well as the occupied territories of Crimea,” said Brzezinski, now a senior fellow at the Atlantic Council think tank.

“In 1980 the USSR had more than 30 Soviet, Czech and East German divisions in the field, deployed to execute an invasion into Poland.

“We don’t have the same military force posture as we had during the Cold War. Nato is significantly diluted and this must be addressed.

“We desperately need a military muscle movement that would involve the deployment of Allied forces to Nato’s eastern frontier and into Ukraine itself. Simply sending a single ship once in a while isn’t enough.”

Diplomatically, the West must show now that it is prepared to launch “a complete economic embargo” if Russia does attack.

“This didn’t happen even after the invasion of Crimea in 2014 ‑ sanctions have been targeted against individuals, and they’ve had no effect,” he said.

“There must be a shift to the same sanctions threatened in 1980, when the US was threatening to shut off pipelines and ports and deny all ships access.”

Brzezinski, who served as US deputy assistant secretary of defence for Europe and Nato under President George W Bush, urged those who claim that Russia is bluffing to think again.

“Those who theorise about whether Putin is trying to leverage Biden, or squeeze the gas market, seem to be forgetting the reality which is Russian forces poised for offensive action,” he said.

“Putin has already invaded Georgia and Ukraine. This is someone who doesn’t believe Ukraine is an entity, and that its independence is a historic wrong against the Russian people. Invasion is a real possibility.”

He added: “My father was extremely proud of the work he and President Carter did to halt what was considered to be an imminent Soviet invasion of Poland. But it was a close-run thing.”

Potential invasion was discussed at a Nato meeting of foreign ministers in Riga, last week.

US President Joe Biden confirmed he was “putting together the most comprehensive and meaningful set of initiatives to make it very, very difficult for Mr Putin to go ahead and do what people are worried he’s going to do.”

He and Putin are due to discuss the issue in a video call later this week.