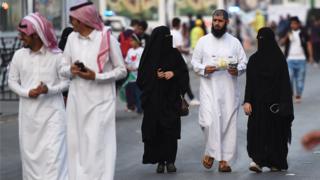 Abdullah al-Hamid, a founder of the Saudi Civil and Political Rights Association, had been in a coma after suffering a stroke.

Human rights groups had long called for his release.

Saudi Arabia, widely criticised for its intolerance of dissent, has not commented on the reports.

Dr al-Hamid, 69, and another activist, Mohammed al-Qahtani, were convicted at the same time and sentenced to 10 and 11 years respectively.

The men had been found guilty of a raft of offences, including “inciting disorder”.

Fellow Saudi activists have accused the Saudi authorities of not giving Dr al-Hamid adequate medical treatment since he fell ill two weeks ago.

British-based Saudi academic, Madawi al-Rasheed – who is an outspoken critic of the current Saudi leadership – has described Dr al-Hamid as a symbol of the struggle for human rights.

The Saudi Civil and Political Rights Association was shut down after its co-founders were convicted.

Campaigners say Saudi Arabia has one of the worst records for human rights in the world, with freedom of expression severely curtailed and critics of the government subject to what they say is arbitrary arrest.

Related posts:
Hot News
UK’s top 30 worst-hit coronavirus areas exposed – as infections continue to rise
‘Whatever Nicola!’ Scottish FM Sturgeon attacked after swipe at Rishi Sunak’s scheme
Video of woman hogtied in Aurora police car shown at hearing
Biden will allow lobbyists to join transition team
Meddling Sturgeon attacked over secret EU and SNP talks as Brexit deal at crunch point
Recent Posts
This website uses cookies to improve your user experience and to provide you with advertisements that are relevant to your interests. By continuing to browse the site you are agreeing to our use of cookies.Ok