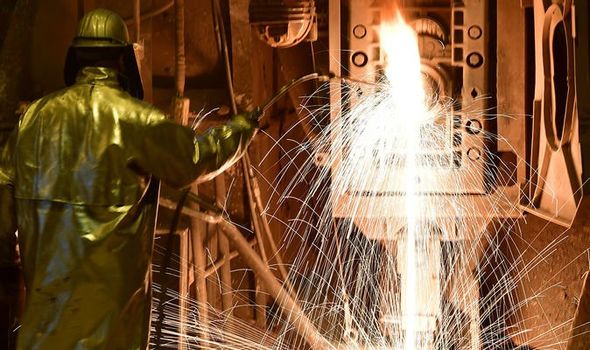 Matthew Lynn claimed political paralysis, issues with industry and poor post-pandemic recovery have seen other economies overtake Germany in terms of growth. He forecast that the Euro “will be weak, unstable, inflationary, and constantly devaluing – and that will be a huge change.”

Writing in Saturday’s Telegraph, Mr Lynn noted “it doesn’t matter which statistics you look at, the numbers out of Germany have been consistently disappointing.”

The “sheer size” of the German automobile industry – which accounts for around 10 percent of the country’s GDP – has made it “acutely vulnerable” to a slowdown in car sales and a rise in electric vehicle sales.

The country has faced supply chain issues and a reliance on Russian gas had exposed it to soaring energy prices, Mr Lynn noted.

Wholesale natural gas prices have risen significantly this year as demand increased with economies unlocked from the coronavirus pandemic.

Meanwhile, retail sales were down 2.5 percent, against a one percent increase which had been forecasted as the German economy emerged from the pandemic. Inflation was running at 4.5 percent.

However, other Eurozone countries have not fared similarly.

Italy had seen its GDP rise by 2.6 percent in the last quarter, with inflation at the much lower rise of 2.6 percent.

“Even Greece is doing a lot better, with growth of more than seven percent forecast for this year,” Mr Lynn said.

“The net result? The imbalances within the eurozone are just as strong as they always have been. It is just that they have switched places.”

He added: “It is Germany that is emerging as the weakest link, and the Mediterranean states are doing better.”

This would have two effects, he forecast. “First, power will shift from Berlin to Paris and Rome.

“With the departure of Angela Merkel, and her replacement by the Social Democrat Olaf Scholz running an unlikely coalition of socialists, greens and free market radicals – a combustible mix if ever there was one – that was always likely to happen.”

Germany will not be able to “preach austerity” to other European nations, Mr Lynn said.

“It is easy to tell everyone else what they are doing wrong when you run the strongest economy,” he said. “It is a lot harder when you are one of the weakest.”

That will “set the path for bigger government and more spending.”

Mr Lynn summarised: “Industrial production has been weaker than anyone expected. Retail sales are plunging and show little sign of recovering.

“Exports are in decline, stagnant industries show little sign of expansion and the Government is paralysed as parties squabble over the composition of a coalition that won’t last very long anyway.”